One of the major reasons for the enduring political crisis in California is that the state budget and major decisions on tax increases have to be passed by the two-thirds supermajority. California is the only state to require the supermajority in both scenarios, while only two other states require two-thirds of votes to take decisions on budgets. It appears that the only way to make California’s politics functioning again is to replace the supermajority with the simple majority.

At the moment, the entire state is seen as being held hostage to special interest represented by the Republican Party that vociferously opposes any tax raises.

Don't use plagiarized sources. Get your custom essay on
“ Political Crisis and Bringing California’s Budget ”
Get custom paper
NEW! smart matching with writer

However, eliminating the two-thirds rule does not automatically mean that taxes have to be increased: California’s legislators would have to carefully consider the effects on the state economy before doing so. Yet spending cuts in the public sector and rollback of social programs, which is the option favored by Governor Schwarzenegger, is also not the most optimal.

Instead, the government of California should focus on boosting employment and economic growth in order to collect more revenues. The green industry as well as professional, scientific and technical services should be seen as the priority, as they are already delivering job market growth. In general, California’s entrepreneurial and highly educated workforce will be the driver of the recovery. Support should be provided to manufacturing workers that had been laid off in terms of requalification and assistance in finding work in a different sector.

Efforts aimed at attracting businesses and residents to California should be stepped up.

Another suggestion in term of reforming the budget process would be to oblige legislators to prepare a two-year spending plan along with a five-year forecast. There are numerous groups (such as Restore Majority Rule, California Forward etc.) that campaign for the introduction of the aforementioned changes.

There are numerous challenges facing California’s government. The protracted nature of the political crisis and serious fiscal difficulties call for a proactive policy aimed at making California politics more functional in order to fulfill voters’ expectations. The reasons why California has to struggle with the massive budget deficit are numerous, yet the most important of them appears to be that “California overspent in its boom times, when taxes from wealthier and wealthier tech entrepreneurs filled state coffers” (Ambinder 2010, para. 5). The downturn was unexpected and sharp, and there were many projects that relied on public financing.

Governor Arnold Schwarzenegger’s proposal on closing the budget gap, which involves pay cuts in the public sector, termination of several social service programs and asking the federal government for more funding, as Steinhauer (2010) reports, does not seem optimal.

The state should rather focus on raising more funds than cutting expenses. At the same time, increasing taxes even further might slow down growth, while it needs to be rejuvenated as soon as possible: “Instead of raising taxes as a quick-fix solution to a deep problem, a positive way to deal with the problem is to create new jobs and promote growth through tax cuts and less regulation” (Campaigns That Matter 2010b, para. 3).

Though a combination of various instruments, the government should lay down the basis for long-term economic sustainability and development. One of options would be to continue support for the green industry, since California is already noted for “gearing up to be the nation’s clean technology leader and innovation center” (Campaigns That Matter 2009, para. 1). It is now estimated that more than 114,000 jobs can be created by California’s green policies, most notably the Green Jobs Corps, meaning up to $25.3 billion in additional revenue by the end of 2010 (Campaigns That Matter 2010a).

Furthermore, more measures should be taken to encourage workers and businesses to relocate to California as well as to encourage local businesses to create more jobs. At the moment, the fastest growing sector of the job market is professional, scientific and technical services; California should attract and retain talented employees in this field by offering them and companies that hire them benefits in the form of tax breaks or other incentives (Campaigns That Matter 2010a).

At the same time, manufacturing, which is one of California’s largest industry sectors providing 1.5 million jobs, is expected to shrink even further. It is therefore the task of the state to help manufacturing workers who loose their job to re-qualify and find meaningful employment in a different sector.

Governor Schwarzenegger’s decision not to cut funding top public universities appears to be visionary, since California’s competitive advantage, namely its entrepreneurial and highly skilled and educated workforce, is likely to deliver job market recovery in the second half of 2010 and the first half of 2011. It has led some commentators to argue that “California has been battered in the recession, but signs clearly point at a burgeoning rebound” (Campaigns That Matter 2010a, para. 12).

However, economic recovery requires political stability. There have been suggestions for eliminating the two-thirds supermajority rule for approval of the budget. The advocates of the idea point to the fact that California is one of only three states that has the two-thirds rule; they call for restoration of the majority rule in order to prevent the entire state from being held hostage to special interests (Restore Majority Rule Campaign 2009).

In addition to the two-thirds supermajority necessary to approve the budget, California also requires such majority for any significant decision concerning taxes. It is the only state to require supermajority for both budget and revenue decisions. There have been complaints that the Democrats are being held hostage to Republicans who oppose any tax increase. While California has the largest number of millionaires in the U.S., they do not pay more during hard economic times because of the age-old Republican promise not to increase taxes (Phelan 2010).

While the decision to scrap the two-thirds rule for decisions on the budget and revenues might help to streamline California’s political process, the party in power would still need to consider the long-term consequences of any tax increase. The consequences for businesses have been discussed earlier, yet increasing taxes on the rich can also have adverse effects, as millionaires might abandon California as their place of residence and take away all jobs they create.

Another way to streamline the budget process would be, as the California Forward (2009) proposes, to mandate politicians to prepare “a two-year spending plan along with a five-year fiscal forecast before approving the annual budget” (p. 1). This will allow them to balance short-term and long-term fiscal priorities.

Thus, it is clear that structural reform of the budget process is necessary, and the two-thirds supermajority rule is outdated and inefficient. If this rule is eliminated, California’s politicians will have more time to devote to making policy and ensuring economic growth instead of partisan bickering. Moreover, requiring lawmakers to prepare a two-year spending plan along with a five-year forecast will make them more responsible in their spending and accountable to the public. 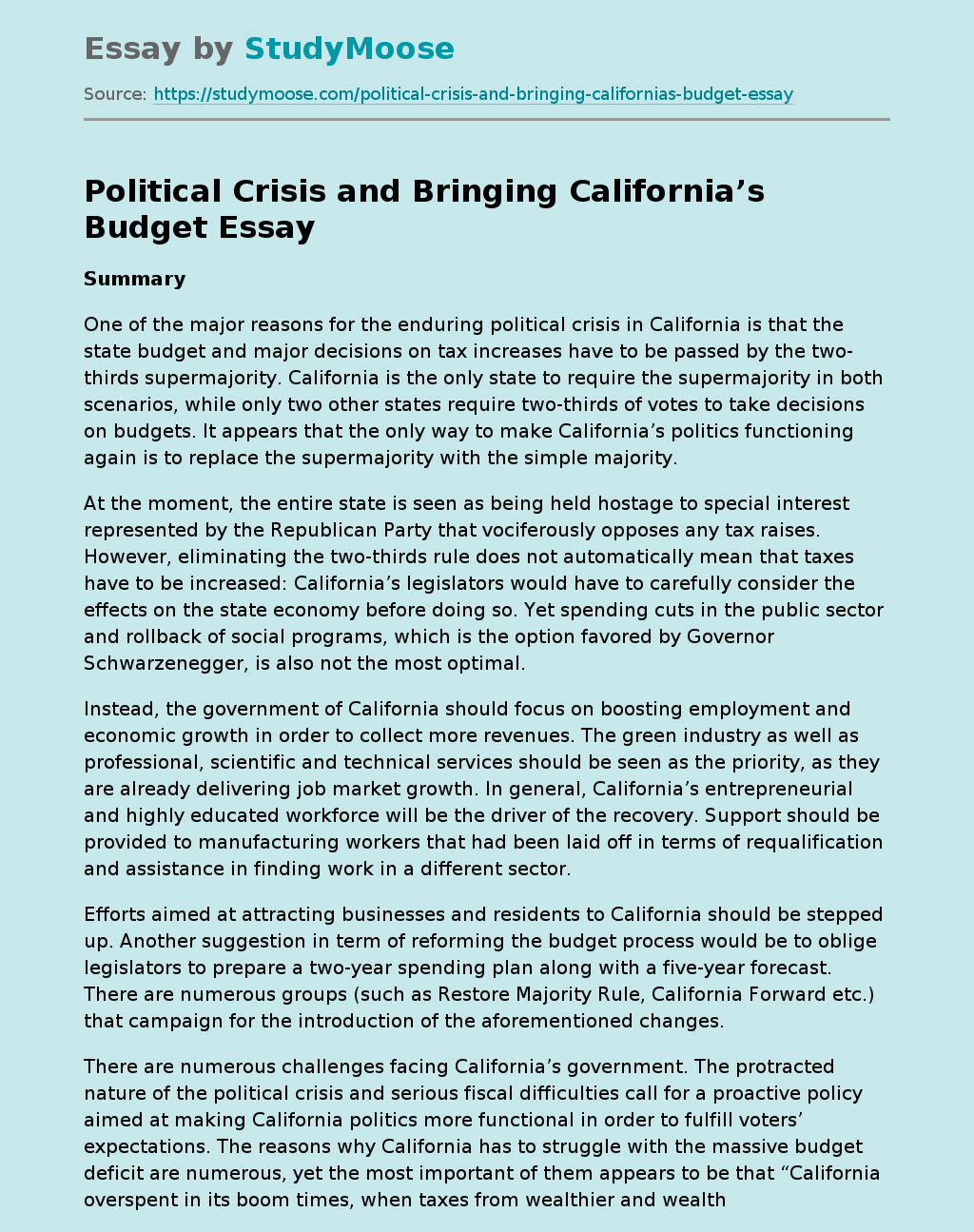