Plato was the earliest most important Greek Philosopher and educational thinker. Plato thinks education as a key for a society and he stress on education, for this purpose he want to go to the extreme level even removing children from their mothers and rise them by the state, he want to identify the skills of the children and give them proper education for that particular skill which they have so they could be become a suitable member of the society and fulfil their duty in society.

Don't use plagiarized sources. Get your custom essay on
“ PLato and Education ”
Get custom paper
NEW! smart matching with writer

Plato want to a search for intelligent and gifted children in the whole society, Plato’s don’t belief that talent belong to a limited class therefore he stress on education for all so the talented children get the chance to shine. Plato contributed a lot in the form of ideas and it inspired his follower to find new ways for education and training of the children. In fact Plato himself did not contribute directly to science and mathematics but he stress on these subjects, his philosophy of education influenced the developments of these subjects in centuries to come.

In the philosophy of Plato we can see some signs of the philosophy of Socrates; However Plato covered the major aspects of philosophy discussed today. Plato was born in an upper class family in Athens; he was interested in political career, but after the death of his teacher Socrates Plato pursues his teacher philosophy. For the purpose of education Plato travel to Egypt and Italy, there he learnt mathematics.

After returning home he established an Academy, to teach moral values to the elite youth of Athens to make them better leaders of the society.

Plato shows his ability of writing in different fields; ethics, music, drama, poetry, metaphysics, dance, architecture which are the ideal forms of Government. Contribution of Plato in scientific subject is little but his ideas on education inspired his followers to explore new dimension in education. Plato writes in his book “Let us describe the education of our men. What then is the education to be? Perhaps we could hardly find a better than that which the experience of the past has already discovered, which consists, I believe, in gymnastic, for the body, and music for the mind.

” Plato not only consider better education for men but also believe on strong body and sound mind, for body he recommend sports and for sound mind music. Plato ”No man should bring children into the world, who is unwilling to persevere to the end in their nature and education. ” EDUCATIONAL THEORIES OF PLATO Education for All Plato want every boy and girl educated to it limit. State Education Education should be provided by the state not by parents. Organization and Curriculum.

Plato curriculum was consist of gymnastic and music, where in gymnastic include physical training and music used in broad term for dram, history, oratory and music in real term, he define different stages for the organization and curriculum; 1. Elementary School Co-education at elementary level and teach them mathematics, poetry, music and literature till the age of eighteen years. 2. Military Training After elementary education two years of Physical education should be given to them and select best of them for higher education; to prepare for the future guardians of the state.

3. Higher Education Higher education should be given from twenty to thirty-five years of age, he well study the subjects at this stage mathematics, literature and philosophy. Later on he would be opponent at a minor administrative position to get experience for the future more important governing positions. “The object of education is to turn the eye which the soul already possesses to the light. The whole function of education is not to put knowledge into the soul, but to bring out the best things that are latent in the soul, and to do so by directing it to the right objects.

The problem of education, then, is to give it the right surrounding. ” -(Plato’s Republic, Book vii, 518) Nothing was more important to Plato in human life as education. He considers education the greatest thing in human life as he mention in his book “the one great thing”. Plato’s Theory of education was an indispensable necessity for mankind. It was a positive remedy for the problems and operation of justice in an ideal state. Women Education Plato also emphases on women education, he consider the same kind of education for women.

Women should the same physical and educational training; they should know the art of war. The main aim of Plato was that each member of the society should undertake his work and responsibilities. Plato believed that women are equal to men and that, although some women are physically smaller or weak, some women are physically equal to men therefore those women who are physically strong should be allowed to learn the same skills that men do. In his book Republic Plato describes how male and female receive the same education and be given the same duties in society as given to the male member.

These people are the ones who will be in charge his republic which would be an ideal society, where philosophers are kings. In other words, who know what is good for the people and for the mankind and take their decisions based on that knowledge. Teaching Methods Plato recommended play method at elementary level; student should learn by doing. And when he reached the higher level of education, his reason would be trained in the processes of thinking and abstracting. Plato wants motivation and interest in learning. He is against the use of force in education.

Plato wants a place where children love to go and stay there and they play with things which enhance their education by playing. Plato gives importance to nursery education, he thinks nursery education plays a vital role in the education of man, it help to build his moral character and state of mind “The most important part of education is proper training in the nursery. ” –plato Plato think It will be hard to discover a better [method of education] than that which the experience of so many ages has already discovered, and this may be summed up as consisting in gymnastics for the body, and _music_ for the soul…

For this reason is a musical education so essential; since it causes Rhythm and Harmony to penetrate most intimately into the soul, taking the strongest hold upon it, filling it with _beauty_ and making the man _beautiful-minded_. The above quotation of Plato show, how he sees education, he wants the total development of a man, mind body and soul by using every possible mean. That why in another place Plato writes; “But then, if I am right, certain professors of education must be wrong when they say that they can put a knowledge into the soul which was not there before, like sight into blind eyes.

They undoubtedly say this, he replied. Whereas, our argument shows that the power and capacity of learning exists in the soul already; and that just as the eye was unable to turn from darkness to light without the whole body, so too the instrument of knowledge can only by the movement of the whole soul be turned from the world of becoming into that of being, and learn by degrees to endure the sight of being, and of the brightest and best of being, or in other words, of the good.

” -Plato’s Allegory of the Cave & Exploring Plato’s Plato Aims of Education* To develop leader among the future rulers. * To develop hard and competent workers. * To produce leaders with military skill among the warriors. * To produce future Civil Servants of the state. The highest goal of education, Plato believed, is the knowledge of Good; to nurture a man to a better human being it is not merely an awareness of particular benefits and pleasures, Stages of Education Plato describes different stages of education in his republic.

The four stages start at the age of twenty five to thirty years and in this age they get the training of Mathematical calculation and last for another ten years, after the completion the selected one’s are admitted in the study of dialect. During fifth stage they study dialect for another five years and after that, at the sixth stage one is ready to become a ruler and philosopher and the one enter in practical life. Plato’s View on Moral Ethics Ethics is the most important branch of philosophy.

Plato especially gives attention to the moral and ethical education of the men, later on Plato gradually widened the scope of his investigations by reflecting not only on the social and political conditions of morality, but also on the logical and metaphysical presuppositions of a successful moral theory. Plato presents his ideas for an ideal society in his Republic and he provided detail about the curriculum and system of education. According to Plato the ideal society who cares for their youth and the guardian would be responsible for the moral education of their children. 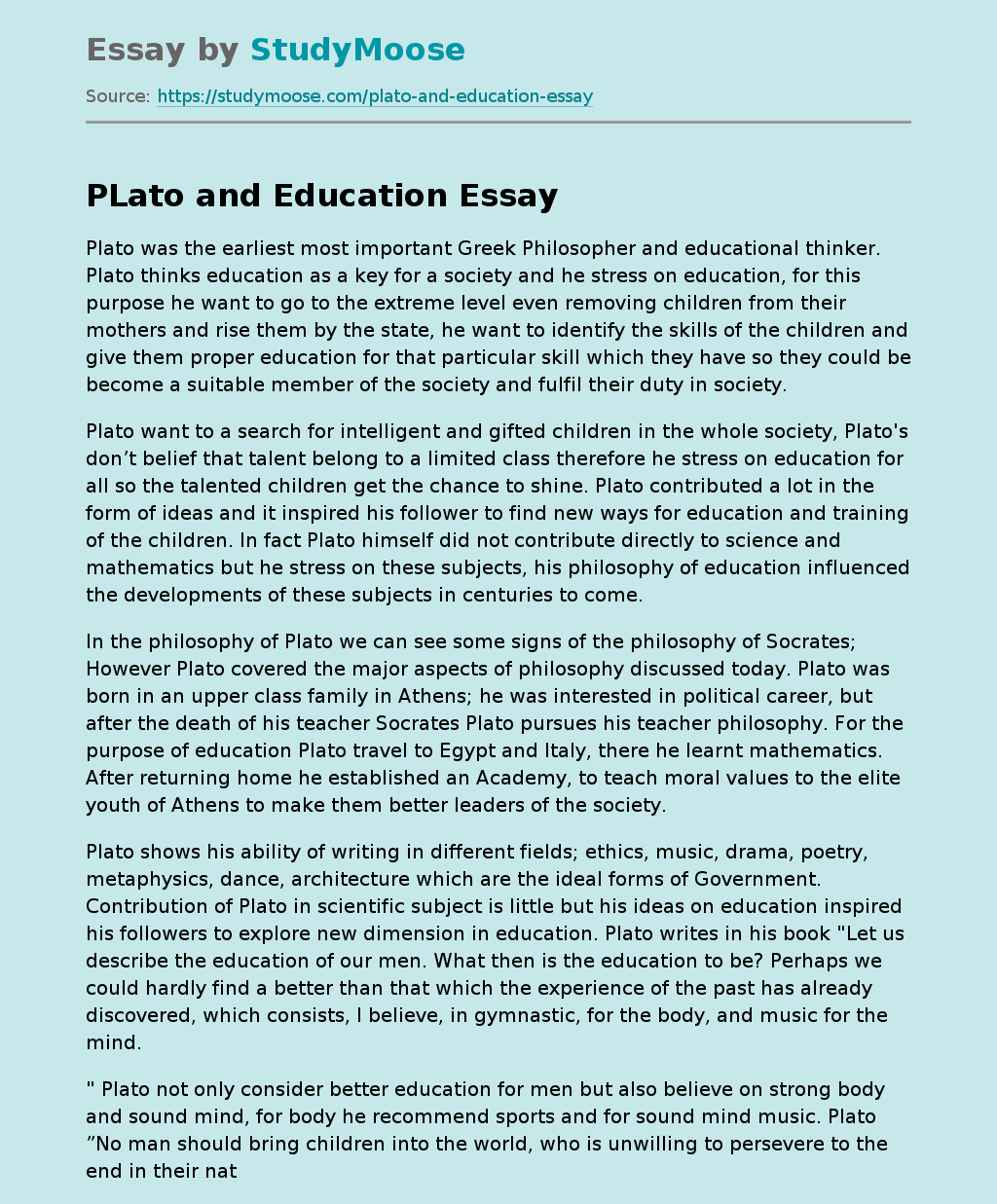