Plato and Aristotle: Democracy and Corruption

Plato and Aristotle both shared the understanding that democracy is unjust and full of corruption. It goes back to the understanding that some rulers gain power when they are not deserving. Aristotle argues that the person who should rule is the one who is a best fit in order to rule effectively. Both plato and aristotle agree that honor should be given to those who possess knowledge of the good.

Don't use plagiarized sources. Get your custom essay on
“ Plato and Aristotle: Democracy and Corruption ”
Get custom paper
NEW! smart matching with writer

It is therefore unjust when honor to rule is given to someone who lacks knowledge of the good. The five regimes that plato talks about are aristocracy, timocracy, oligarchy, democracy, and tyranny. Plato lists three parts in his ideal polis, the rulers and auxiliaries represent the guardians and the people that inhabit the city . There are three components of someones soul, first reasoning, spirit, and desires. For a successful polis to arise, it must be ruled by a philosopher In order for the best regime to come into place.

Aristocracy is the regime in which the philosopher-king or aristocratic is said that the rational part rules his soul in order to attain the Good.

In timocracy it is ruled by honor and dignity, private property is owned, military virtues dominate spirited elements. Spirit of ambition leads to gain and greed, passion and greed leads to oligarchy. Timocracy can be corrupted and turn into an oligarchy, plato says, the value the small they put on money, while their desires and the secret pleasures they enjoy will make them extravagant with other people’s.

( Plato, The Republic, pg 257) group of people are more interested in acquiring wealth and attaining their interest than ruling their people with justice and honor. The oligarchic man is described as an avarice man whose main focus is attaining wealth and power through whatever means he has to take to achieve it. An oligarchy can become a democracy in two ways, first there’s a rebellion among the poor against the oligarchs and when the oligarch’s son grows up and starts to develop a dissatisfaction towards his father’s as the son of oligarchic man grows up resenting his father’s inexorable appetite to hold onto his wealth. In most cases the son will grow up having an easier life than his father, so in contrast the son did not have to work hard to attain his wealth like his father, the son will often have the traits to spend all of his father’s riches where he himself lacks the imperative traits needed for himself to be able to acquire and preserve their own wealth.

Someone like this would despise it in his you youth, but the older he got, the more fond of it he would become. This is because he shares in the money-loving temperament.( Plato, The Republic, pg 258) Plato states that the poor will too have resentment towards the wealthy and they too lack the traits needed to gain and maintain their wealth just like the sons of the oligarch, plato describes the poor as, They are drones with stings. Eager for revolution, they hate and plot against those who now possess their property and the others like them.( Plato, The Republic, pg 267). The democratic man can be described as someone who loves freedom and no limitations set in place for him, his desire is not kept in check since there is nothing to stop him from seeking out what he desires. What is different about democracy from other types of regime is that anyone can live there, and you don’t have to be a philosopher order to have a voice in government. Plato does not favor democracy, because he believes since there is no order and restraints placed upon the citizens such freedoms cause injustice and corruption. Unjust men will take their chance to rule where they promise to bring change to the society and to rule fairly in the interest of the citizens, but in actuality they are just demagogues. The last regime is tyranny, which is the absolute symbol of appetite, insatiable appetite.

In plato’s term a tyrant is someone who is unhappy, not healthy and is a slave to his own ap for power which is described as being ruled by a ruler or a small group of people oppressively. The Tyrannical man is a save to his desires and wants, he lacks self discipline and control. To tack account for what he lacks he takes control of others to satisfy his unquentiable appetites which he can not control within himself. Aristotle says politeia is good because it is a mix of oligarchy and democracy, which is more stable, politeia is a constitutional government. In this government everyone is granted citizenship and the ruling is done often for the interest of the people. This type of government contained both elements of oligarchy and democracy, there is a balance between the demands of both the rich and the poor. He firmly believes that only a particular group of people can have the privilege of participate in government. His logical thinking you can not successfully rule if you are occupied with daily tasks such as having a job. You’re only just as a ruler is to focus on doing what is best for your country, the slightest mistakes can inhibit your ability to be an effective ruler to your country and people.

The political good is justice, and this is the common advantage.(Aristotle, Book 3, Chapter 12). Aristotle believes that through politics there will always be a true form of justice because goodness and virtue is always present. If politics is not present in a society it is hard to find an entity which can benefit the city as a whole when politics is taken away. In an oligarchy government only a few have the right to rule, the government is run by a small group of wealthy people. Unlike aristocracy where the government rules in the interest of both the poor and the rich, Aristotle says that, oligarchy is a bad form of government because those who are in power only rule based on their own interest and disregard the needs of the poor. Aristotle states that a regime or any type of government is structurally organized and enclose a variety of governments and figures that work in the government. In order for a regime to work effectively. A just and fair regime’s main goal is to make sure a city runs effectively and its citizen live their lives having virtue. He says, The regime is an arrangement of a city with respect to its offices, particularly the one that has authority over all matters(Aristotle, Book 3, Chapter 6).

Aristotle praises aristocracy, and considers it higher quality than oligarchy since in oligarchy a small group or wealthy individuals rule for their own interest and disregards the needs of the. In an aristocracy government it takes into consideration of ruling in the interest of everyone, no matter their class or status. Aristotle scorns democracy because, it is a type of government in which he believes the poor masses attain control and selfishly their power to serve their own ends. He believes since the poor resent the rich they will exploit the tax system by heavily taxing the rich. Aristotle believes the worst sect of democracy is demagoguery or mob rule, which is often carried out in extreme means. He argues in such rule demagoguery, no one is more important than another and that everyone shares equality, the majority rule has more power than than the law. People become above the law as a result often a charismatic leader, or demagogue, steps in to take control and rules as a tyrant over the citizens. He comes in and tells the people he will rule in their interest and makes sure their needs are met but in actuality he is ruling in his need and the people are often blinded by his fake promises to notice his deceitfulness.

Aristotle affirms his reason why democracy is bad and why he believes democracy is not the best form of government. He states: in democracy excellent people will not rule, democracy is not just, it lies on partial justice, demagogues make poor decisions and act upon their own interests, and lastly people who have no money or merit should not have power, folly leads to crime and makes people confuse their own interest. Aristotle prefers politeia, or constitutional government because in such government there is a balance and everyone’s interests are taken into consideration. He further criticises democracy as a mob rule, he says communal living is unnatural and it focuses too much on unity and that human nature cannot be changed so easily. Communal living is impartial, no feeling of geniuses if formed by communal parenting, thus does not eradicate nepotism. He says aristocracy, oligarchy, democracy concern themselves with their own needs and attaining wealth.

Aristocracy different from the other types of government allows you to rule based on your merit and virtues, and that if you do deserve to rule, then it is fair that those who deserve to govern do in fact govern. Plato feels that the individual person’s interest should benefit society in doing so would achieve the ideal government. In his book titled, The Republic, he describes a utopian society that ecompasses three classes: philosophers, auxiliers, and worker and everyone had their own role had its role. Those who have been given the honor of governance went to the most qualified individuals. Those chosen were called philosopher kings, they went through extensive years of schooling: at a young age they learn about literature and music. Post- elementary they receive an education and do military service of.

If they wish to extend their knowledge they take ten years of math, once they reach fifty and if they are successful they can become either an auxiliary or a philosopher king. Wealth and birth does not guarantee you becoming a guardian, both women and men shared the same opportunities. Aristotle believed that the basic political unit was the city or polis, he believed that all men are born as political animals, so it is in our nature to get into political conflicts. In his view, politics is a rigid structure, compared to plato he believed that a polis can never be just or have economic stability and the role of the polis was not justice or economic stability.

Plato and Aristotle: Democracy and Corruption. (2019, Aug 20). Retrieved from https://studymoose.com/plato-and-aristotle-democracy-and-corruption-essay 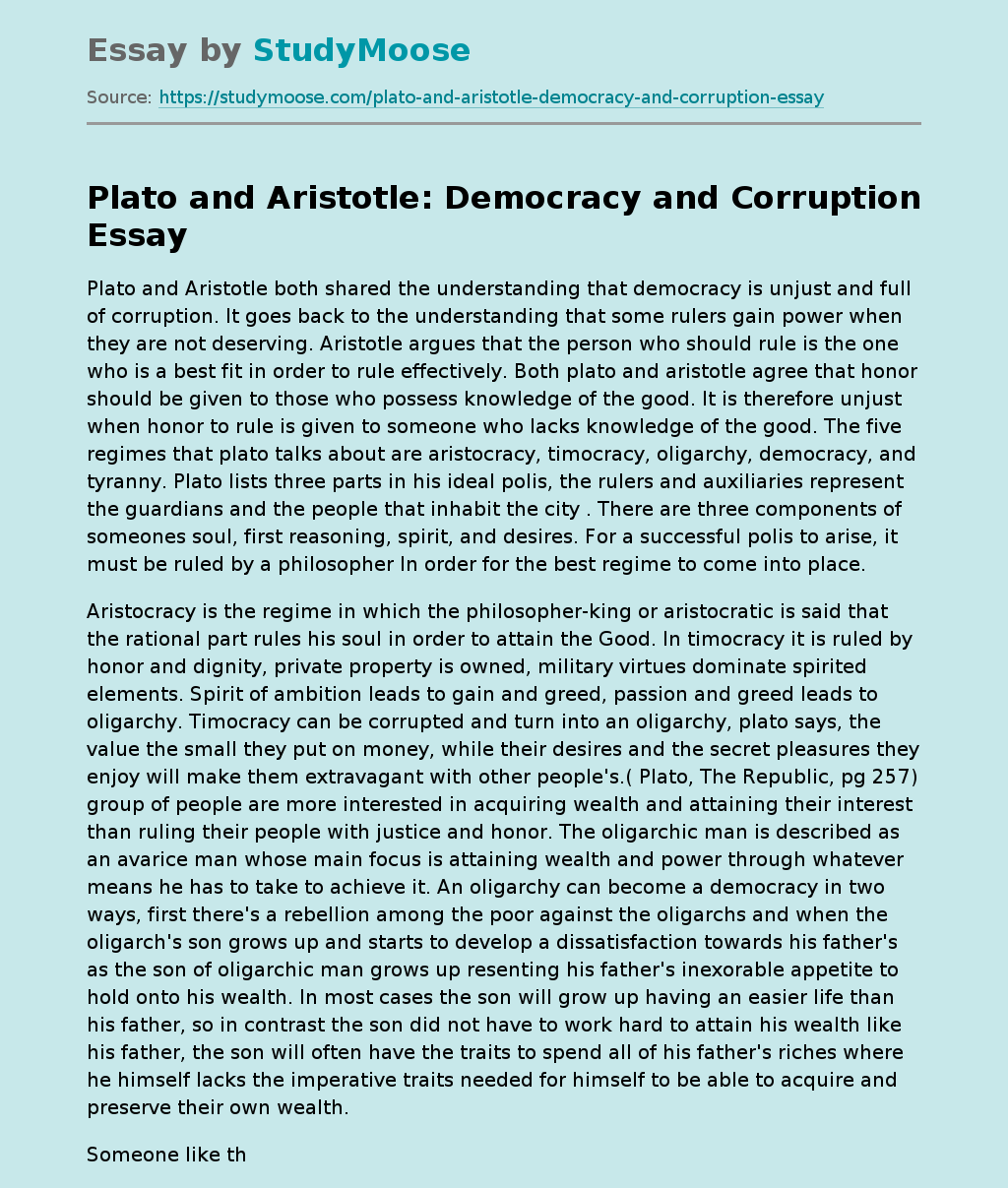