Phileas Fogg in Books, Cinema and on TV

Phileas Fogg is the main character in the 1873 Jules Verne novel Around the World in Eighty Days. Fogg attempts to circumnavigate the late Victorian world in 80 days or less, for a wager of £20,000 with members of London’s Reform Club. He takes the wager and leaves with servant Passepartout, vowing to return by 8:45 pm on Saturday 21 December 1872. Under suspicion of robbing the Bank of England, he is followed by a detective named Fix.

Fogg has no idea about Fix’s true intentions and Fix, in order to get Fogg back to the United Kingdom so that he can arrest him, works with Fogg in the last half of the book.

Don't use plagiarized sources. Get your custom essay on
“ Phileas Fogg in Books, Cinema and on TV ”
Get custom paper
NEW! smart matching with writer

While in India he saves a widowed princess, Aouda, from Suttee during her husband’s funeral and she accompanies Fogg for the rest of his journey. She and Fogg eventually fall in love and marry at the end of the book. Fogg, who has been careful to keep track of every day in his diary, believes that he arrives home on Sunday and that he has lost his bet.

However, he discovers, almost too late, that he has forgotten to adjust his timekeeping for having crossed the International Date Line and he wins his bet after all.

In Philip Jose Farmer’s The Other Log of Phileas Fogg, he is said to be Eridanean, a member of the (ostensibly) more benevolent of two extraterrestrial factions attempting to control the Earth. Fogg is a member of Farmer’s Wold Newton family. Furthermore, in “The Lavalite World” (chapter 8), Farmer strongly implies that Paul Janus Finnegan, the hero of The World of Tiers series, is the great grandson of Fogg.

Fogg is mentioned briefly in James A. Owen’s novel, Here, There Be Dragons, after the characters have a run-in with Captain Nemo and The Nautilus. Onscreen, in films and television.

Fogg was played by David Niven in the 1956 film adaptation of the book; by Pierce Brosnan in the 1989 television adaptation; by Steve Coogan in the 2004 film adaptation by The Walt Disney Company; and by Michael Praed in The Secret Adventures of Jules Verne. In the 1972 animated series, Fogg was voiced by Alastair Duncan. This version of Fogg took the bet to travel the world in eighty days in order to win the hand of Lord Maze’s niece, Belinda. The 1980s cartoon series, Around the World with Willy Fog was based on, and expanded on, the original story.

The characters are anthropomorphisms of various animals. In a television episode of Have Gun, Will Travel starring Richard Boone, Fogg was used in the episode “Fogg Bound” that first aired on 3 December 1960. On the TV show Voyagers!, Fogg is said to have been named after the main character Phineas Bogg, when the latter met Jules Verne in Montmartre. In the 1963 movie Three Stooges Go Around the World in a Daze, Moe, Larry, and Curly Joe circle the globe with Phileas Fogg III and his banana. Around the World in 80 Days was a BBC television travel series first broadcast in 1989.

It was presented by comedian and actor Michael Palin, who followed Fogg’s journey and modes of transport as closely as possible, and achieved the feat in 79 days 7 hours. The creators of Disney’s Phineas and Ferb named Phineas Flynn after Fogg, whose name is changed to Phineas in some adaptations.

Phileas Fogg in Books, Cinema and on TV. (2016, Apr 09). Retrieved from http://studymoose.com/phileas-fogg-in-books-cinema-and-on-tv-essay 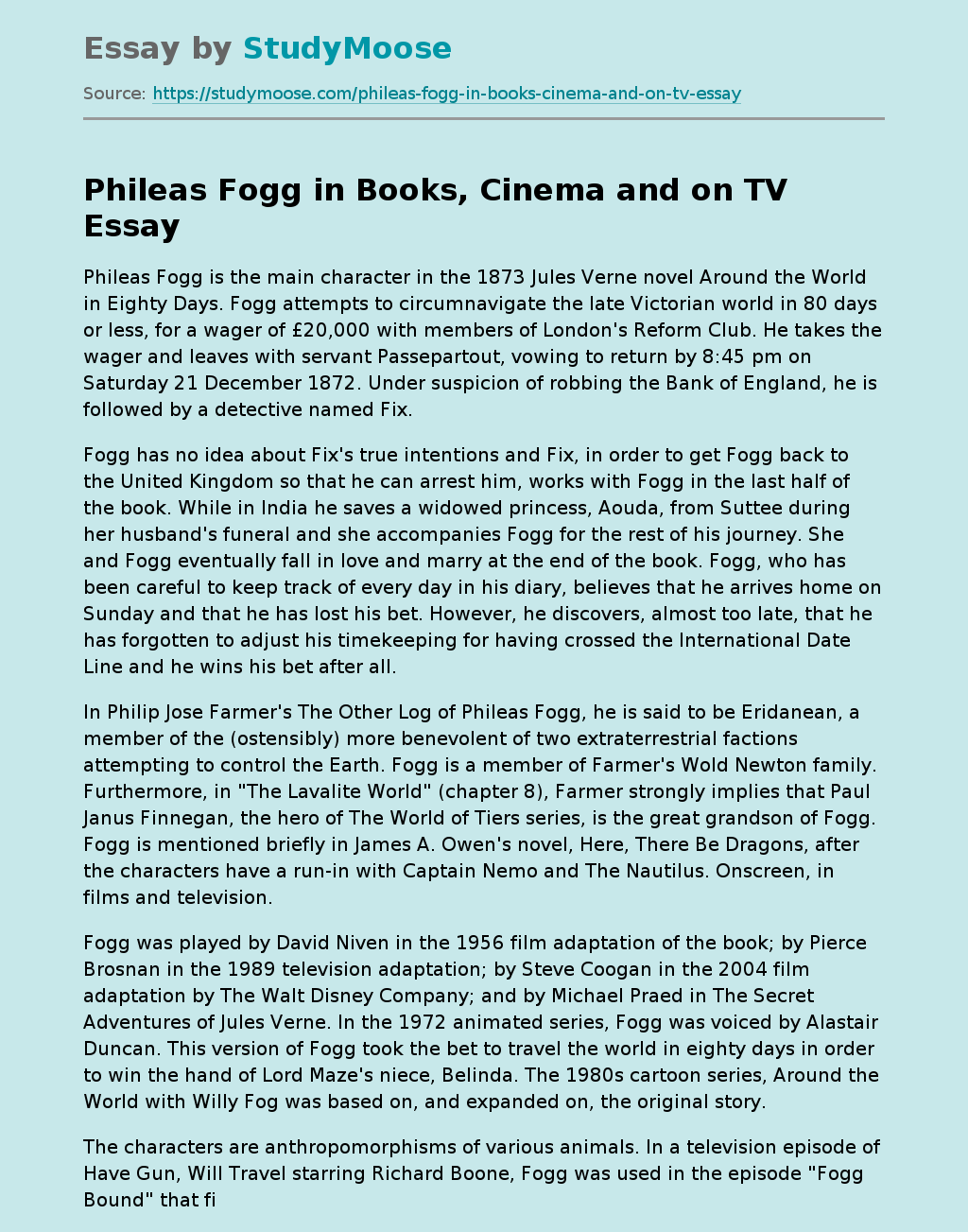