Percy Jackson and the Lightning Theif

Percy Jackson and the Lightning Thief is an amazing book (in my opinion) that was created by Rick Riordan. I enjoyed this book a lot because of all the detain that Mr. Riordan had put into the book and with all of the facts about Ancient Greek myths, I picked it out in the first place because I had became really interested in finding out about different cultures which included Greece . The main character, Percy Jackson, lives in New York city with his mother, Sally Jackson & his lazy step-father, Gabe Ugliano.

Don't use plagiarized sources. Get your custom essay on
“ Percy Jackson and the Lightning Theif ”
Get custom paper
NEW! smart matching with writer

Later on in the story, Percy finds himself living in Camp Half-Blood with his best friend, Grover Underwood.

Camp Half-Blood is for children with Greek Godly parents. All children who go to the camp have ADHD & Dyslexia. The camp is on Long Island Sound and is funded by a strawberry farm that the camp takes care of. I think that the book is placed in the modern days.

You can figure it out because in the camp, you are forbidden from bringing any electronics, such as cell phones since it can easily attract monsters. One of the main events in the book is when Percy and his class are on a field trip to the Museum of Natural History.

As his history teacher, Mr. Brunner babbles on about the museum, Ms. Dodds (a teacher who came along) pulls Percy away from the group and into the Roman & Greek center. Just after entering the room (no one else is in there), Ms.

Dodds turns into this hideous monster with glowing red eyes, wings & long fingers. Obviously, she wasn’t human. Ms. Dodds lunges at Percy (who was still confused and shocked) until Mr. Brunner comes running into the room. The history teacher throws a pen at Percy and out comes a sword that Mr. Brunner used in class during special events.

Percy kills Ms. Dodds after that (she turns into gold dust) and later returns to the school bus. Nobody in his class remembers Ms. Dodds & when Percy asked Grover, he looked very nervous before replying. Obviously, something was going on. A second major event is when Percy and his mom go to Montauk & stay in a cabin at the beach where his mother and father had met. Later at night, a hurricane is starting to form & Grover suddenly shows up with (as Percy describes it) “Shag carpet pants on” . Grover urges Percy and his mom to leave immediately &the three of them hop into Sally’s car.

Percy soon learns that Grover is actually a satyr though he had called him a “half-goat” at first which offended Grover. As their car speeds away from the cabin, a strike of lightening hits the car which makes the car swivel into a ditch giving them an image of a beast of some sort charging towards their car. The three of them escape the car and run (Though Grover was unconscious). The beast was actually a minotaur (half-man, half-bull) and it ‘kills’ Sally. Percy builds up his strength and pulls out it’s horn and stabs it, turning it into dust.

He soon passes out. That event gave Percy the urge to go rescue is mother from the Underworld. . Later in the story, Percy finds out who his father really is. The camp decides to play capture the flag. Percy is assigned to patrol a small creek by Annabeth Chase (daughter of Athena) & is suddenly attacked by a group of Ares children, Clarisse La Rue & her siblings. They came back for revenge because he had humiliated her and her siblings by shooting toilet water in their faces just as Clarisse was about to shove his face into the toilet.

Clarisse charges at Percy with her electric spear given to her as a gift and Percy stumbles into the creek. Instead of feeling weak, he suddenly feels a sudden surge of power go through his r his head. “Poseidon. . . Earth shaker, Storm binger, Father of horses, Hail Perseus Jackson. son of the Sea God. ” body. “But then something happened. The water seemed to wake my senses, as if I’d just had a bag of my mom’s double-espresso jelly beans” . Percy, suddenly feeling a lot of strength, fights back against Clarisse & her siblings until they are all defeated. Percy even snaps Clarisse’s spear in half.

Luke Castellan (son of Hermes) captures the flag for Percy’s team & Percy tries to step out of the water, suddenly feeling weak again. Suddenly, a “black hound the size of a rhino, with lava-red eyes and fangs like daggers” appears out of nowhere and attacks Percy, ripping through his armour. Chiron (Aka: Mr. Brunner and centaur) shoots several arrows at it and Percy staggers back into the water and an image of a trident appears ove Another main event is when Percy finds out who had stolen Zeus’ Master & Hades Helm of Darkness before returning to camp half-blood, Percy had gotten into fight with Ares, the God of War.

The war God had given Percy a backpack in the beginning of his quest & inside of it was Zeus’ bolt the entire time. Ares confesses that he stole the Helm of Darkness and Lightning Bolt from the original thief, planning on making a war between Hades & Zeus. Percy and Ares get into a fight & Percy eventually wins, earning the Helm of Darkness, A helmet of Hades that was stolen from him. Percy, Annabeth & Grover fly to New York from California to return the bolt to Mt. Olympus on the top of Empire State Building. Percy returns the lightning bolt alone while Annabeth & Grover go back to the camp.

After returning the bolt, Percy meets his father and who had acknowledged him as his son. Percy returns to Camp Half-Blood as a hero & at the end of summer, Luke Castellan confesses to Percy that he had stolen the bolt & helm before attempting to kill him with a scorpion. Luke runs away while Percy is saved by a group of wood nymphs . The main character is of course, Percy Jackson . He is described fairly tall, good looking with bright green eyes and jet black hair. Percy is introduced as a troubled twelve year old. His green eyes often remind his mother of his father. Percy is considered very troubled.

He gets irritated when called by his first name which is ‘Perseus’ and has been expelled from every single school that he had been to. Throughout the book, Percy becomes stronger in both physical and mental ways. He becomes more brave, confident, and learns that he is a natural leader. Percy is also very willing to risk his life for others. He showed that trait by journeying to the underworld to get his mother back. Percy hopes that he can bring back Zeus’ Master Bolt & get his mother back before it’s too late. Percy is described the protagonist in the book while the antagonist isn’t exactly shown until later in the book.

While Percy, Annabeth and Grover do the best they can while out on the quest, Luke Castellan was the unsuspecting villain. Luke always acted nice towards Percy, trying to get close. When he had given Percy flying shoes to help him in the quest, Luke had meant it to lead Percy to his death. Overall, I enjoyed this book a lot and I give it a nine out of ten. The book is filled with lots of adventure (there’s never a dull moment) comedy & things that people now a days would consider, ‘fake’ or ‘untrue’ even though it is very interesting.

I recommend this book to all ages but a bit more to people ages 10 to 12, even teenagers. I recommend it around that age because that’s around the age where you start to become more curious about things out there in the world. You start to become more open and realize what you really are interested in and Percy Jackson and The Lightning Thief is a great book to realize what types of book genre you’re interested in & it helps show you that there is always a hidden potential inside of you.

Percy Jackson and the Lightning Theif. (2016, Oct 02). Retrieved from https://studymoose.com/percy-jackson-and-the-lightning-theif-essay 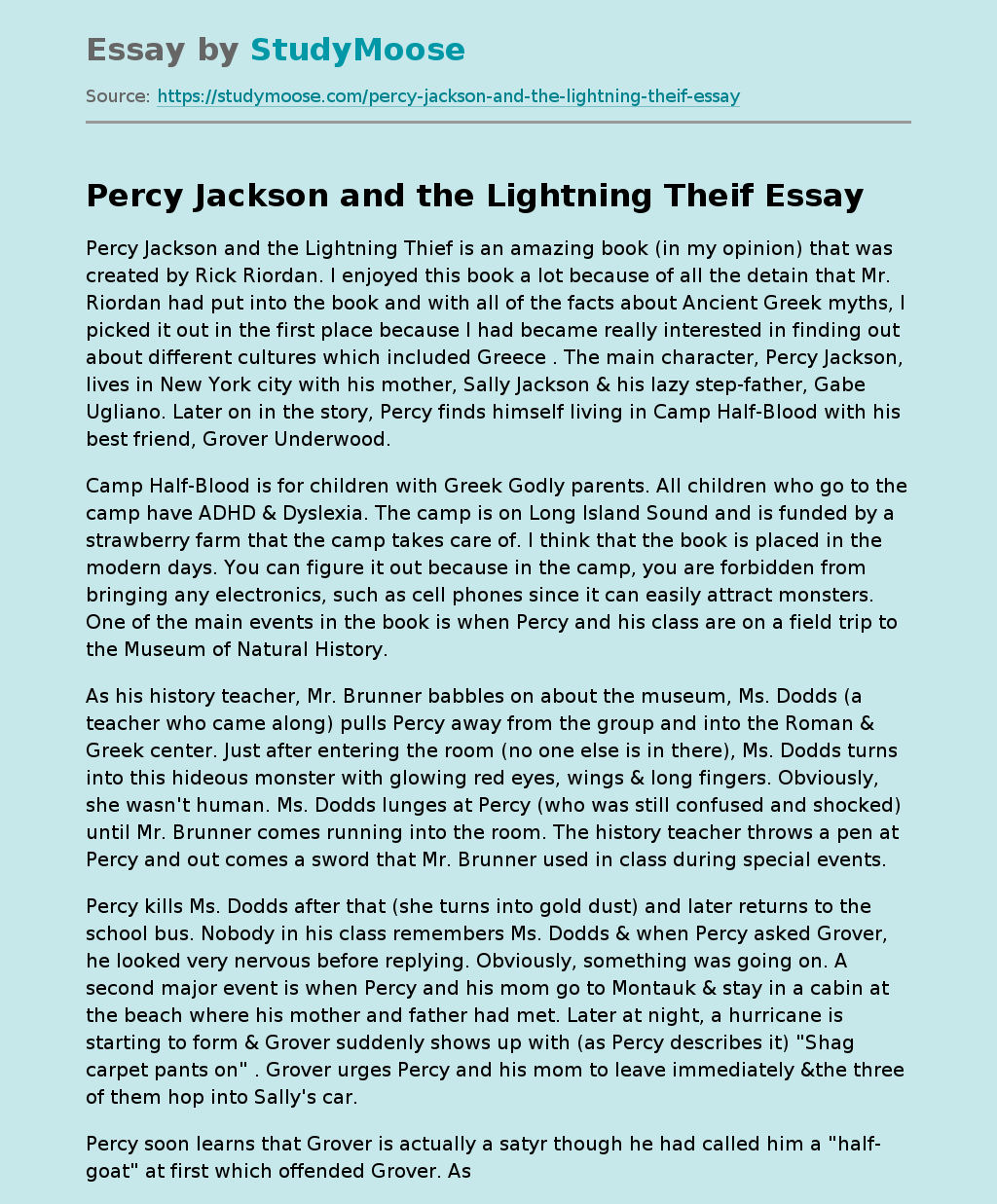