Many people who are physically challenged have accomplished much. This proves that they are not “handicapped. ” Confined to wheelchairs, successful careers have been forged by Bob Sampson and Stephen Hawking. Despite Sampson’s muscular dystrophy, he has earned a law degree and has worked for United Airlines for more than thirty years. Stephen Hawking is most famous for his book A Brief History of Time. Unable to speak, Hawking’s voice synthesizer allows him to dictate his books, conduct public lectures, and teach mathematics classes at Cambridge University.

Don't use plagiarized sources. Get your custom essay on
“ Overcoming Disability ”
Get custom paper
NEW! smart matching with writer

Franklin D. Roosevelt, Ann Adams, and Itzhak Perlman all refused to let polio destroy their lives. Indeed, Roosevelt led the United States as President during two of the worst periods of its history; The Great Depression and World War II. Reassured by his strong, firm voice, Roosevelt inspired hope and determination in the American people. Ann Adams, who was talented in art before polio paralyzed her, knew she had to continue to be.

Having retrained herself to draw with a pencil grasped in her teeth, she produced sketches of children and pets that were turned into greeting cards.

The profits from the cards sustained her. Unlike Roosevelt and Adams, who were stricken with polio when they were adults, Itzhak Perlman was stricken when he was a child. Unable to play sports, instead he studied the violin. Now many think he is greater than any violinist in the world. Like Perlman, many physically challenged individuals turn to the arts. Perhaps the reason is because the joy of artistic achievement compensates for other pleasures they cannot experience.

Ray Charles, Stevie Wonder, Jose Feliciano, and Ronnie Milsap all express their souls through their music.

Although unable to see physically, their music reveals truly how well they see. Although hearing impairment struck Ludwig Van Beethoven and Marlee Matlin it did not stop them from developing their talents. Already a successful composer, many of Beethoven’s most powerful pieces were written after he became deaf. Similarly, Matlin has had excellent acting roles in movies, plays, and television programs. Indeed she won an Oscar for Children of a Lesser God. She encourages and inspires many other hearing-impaired actors to develop their ability. 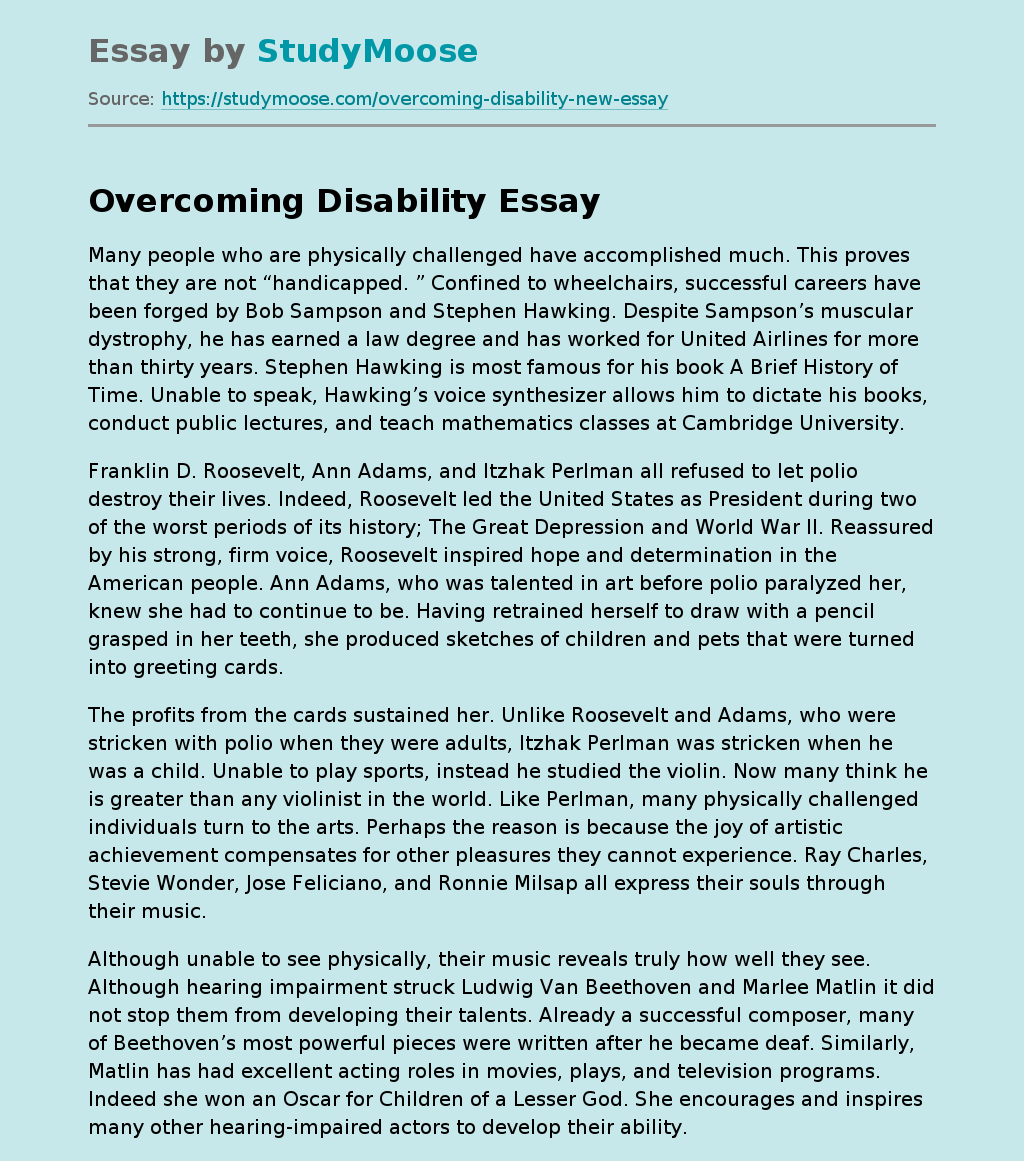