As a dresser for the production of Our Country’s Good, my only exposer to the actor’s techniques are their voices and how they act off stage. Two actors in particular really stole the show. Shawn Passero playing James “Ketch” Freeman, and Major Ross; and Rheo Koss playing Duckling Smith. They both had completely different behaviors on and off the stage that I was lucky enough to watch in my position. I got to hear about the cast talk about how strong the ensemble was when Carolyn couldn’t perform, I watched how something as simple as fixing your hair a certain way can inspire the character.

Don't use plagiarized sources. Get your custom essay on
“ Our Country’s Good Response Paper ”
Get custom paper
NEW! smart matching with writer

Shawn had to show the real extent of his talent by playing two characters who could not be more different. Ketch was a very shy, scared of the world type of character. He was like a twelve-year-old who wanted so badly to fit in with everyone, but every group hated him. He’s extremely fidgety and keeps his head down at first.

The convicts wanted nothing to do with him because he was the “Hang Man”, and the officers had no reason to interact with a prisoner. There is a scene where Ketch shows up late to rehearsals, and everyone leaves not even a minute later. He stands there crying to himself in order to show the audience just how alone he is. However, like Ross, he is very big and very bold. Personally, I see him as that bully you eventually grow away from.

He abuses his power to the convicts to the point that I could hear them move away from him as soon as he entered, but with Ketch, they cornered him at his introduction and even punched him (or slapped, I couldn’t tell from my position).

During Shawn’s changes, he seemed perfectly himself. He would thank us, have conversations, but the moment I reminded him to fix his hair (clean left sweep for Ross, ruffled and wild to the right for Ketch) right before he entered, I would see him transform into his given character. His head held high, a permeant stink in his nose, and this kind of movie classic “I’m the King” attitude. With Ross, it’s easy to tell what he wants in the play. He’s very open about it since the beginning, he wants the play to end. He’s convinced the convicts are going to use it as an excuse to go against the officers in charge. He doesn’t want to raise “moral”, he wants them to work and be under his boot. Personally, I think he’s scared of losing his power over them. He thinks that if they start having thoughts besides getting punished, it would eventually take more than barking at them to keep his place. As Ketch, the boyish man just wants to fit in. He only joined on killing that man show he was one of the boys, and he was only a lookout for the theft to show he can have people’s backs. He didn’t want to be the executioner and wishes more people would understand that. Shawn shows Ketch growing confidence as the show goes on. He goes from hating his role as the executioner, to using it to his advantage to intimidate Ceaser in being in the play in the final scene. He goes from the person Liz Morton hated more than life, to the one she leans her head on and hugs in the final scene.

Rheo Koss, my suitemate and amazing friend. Her performance as Duckling was beautiful. She showed she was just as manipulative as Harry Brewer when she was introduced by redirecting his anger towards her into sexual tension. She showed Duckling as fierce and ready to fight when Dabby called Brewer an “old tosspot,” she’s quick to the offensive responding with “Don’t you dare talk of MY Harry-“. She showed that even though she may not get along with her lover, she’ll be the first one to defend his honor in any situation. Duckling has a monologue when Harry dies in bed, and right before that scene, Rheo would be sitting on the darkest corner of stage left, her head down, swaying and deep in her own world. It took me a few runs to notice she was there, and a few more to realize she was getting deep into Duckling’s emotions. Some nights she managed to do it better than others, resulting in tears and words that you felt more with your heart than your ears. Even after the show, I would find her makeup running and her attitude being a bit out of the loop. It didn’t take her long to get out of character, a Disney playlist in the dressing room, and some laughs always got her out of it.

The cast overall was beautifully picked and played. The officers seemed close, but not enough to take off their coats or even let loose around each other. The only one who seemed to really let loose was Captain Cambell, completely drunk and stumbling through his thick accent to let in maybe four words here and there. Everyone was attentive, back straight and words carefully said. It seemed the exact opposite happened to the convicts. Physically aggressive behavior like the “thieving bitch” line that leads to a fight, and yet immediately after showed them defending each other and circling Ketch as he’s introduced. Liz Morton brings attention to what is apparently a prison wide hatred to Ketch by saying “I’d rather take a leap in the dark than turn on my own kind.” The way that Jennifer delivers this suggests pieces of Ketch’s backstory. Shawn is still showing Ketch to be shy and friendly, even with a hoard of woman cornering him. Even Second Lieutenant Ralph warms up to them, going so far as to defend Liz. The bond and trust between these actors show so clearly in their performance, it just proves that ensemble building is the best way to show love and care in a show.

Our Country’s Good was a beautiful production. With an amazing cast, fantastic set, lovely costumes and an even better crew. More to come! 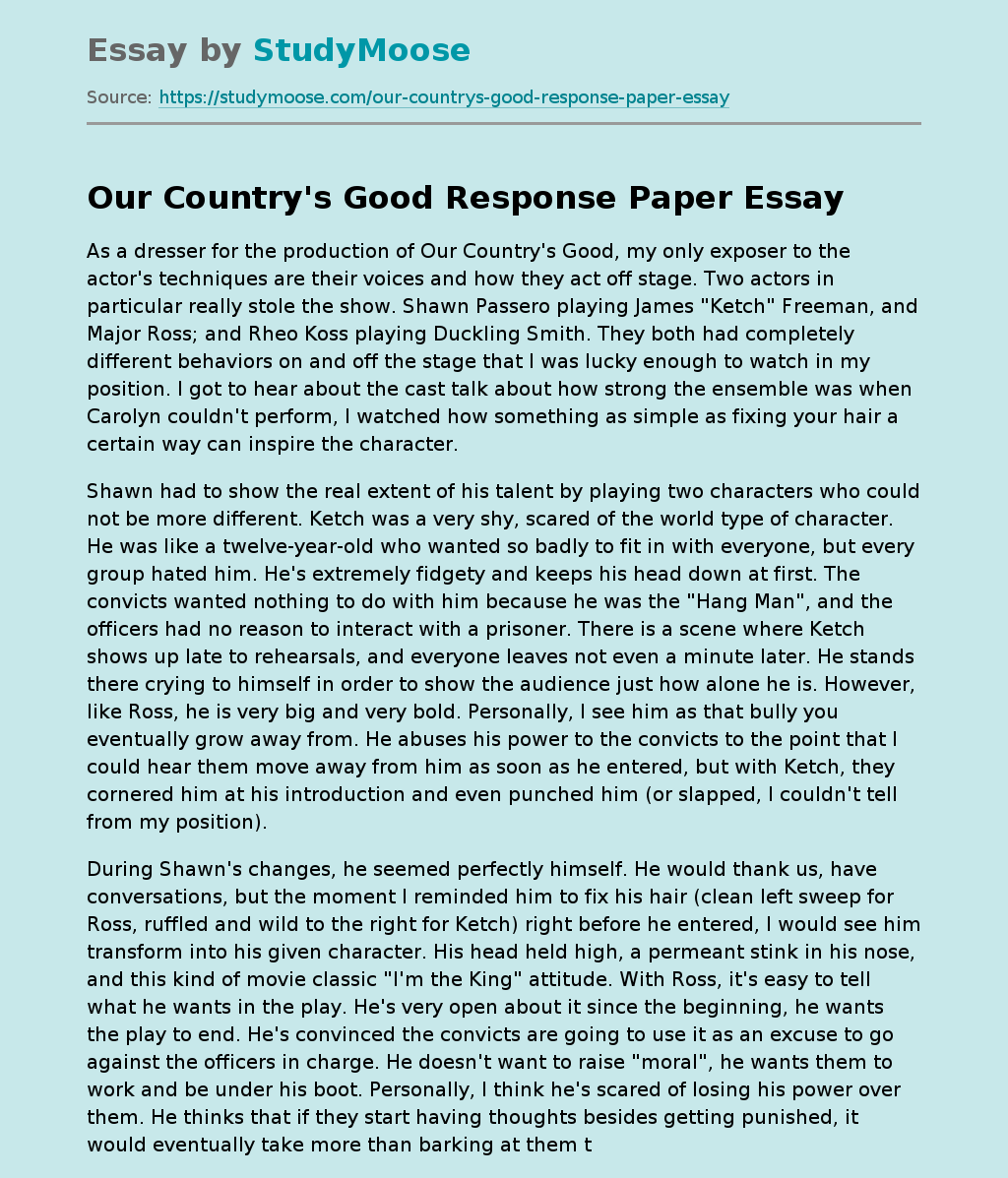