Optimism in The Grapes of Wrath

At the end of the novel The Grapes of Wrath, by John Steinbeck, it seems as though the Joads have nothing left to live for, however Steinbeck shows signs of optimism through symbols and biblical allusions. The Joads have gone through tremendous hardships throughout their entire trip to California to find work.

They have lost several family members, have gone without work and lived on extremely low rations for months. At the height of their struggles, the Joads are without food, shelter, and their strongest member Tom Joad.

Don't use plagiarized sources. Get your custom essay on
“ Optimism in The Grapes of Wrath ”
Get custom paper
NEW! smart matching with writer

The daughter, Rose of Sharon also delivers a stillborn baby. Steinbeck does however end the story with symbols of hope. The rain, which is constantly pouring down, is a symbol of renewal. The rain represents the coming of spring and plants. The rain has made a tiny points of grass came through the earth and Athe hills were pale green with the beginning year, enabling for new crops to grow and for families to find work.

Rose of Sharon’s stillborn baby is also a symbol of optimism. Uncle John is told to bury the baby after it is delivered. Instead Uncle John decides to float the baby down a river in its coffin. Through this action, Steinbeck alludes to Moses, who was also sent down a river as a baby, and later freed his people from slavery and brought them to Isreal. As Uncle John puts the stillborn baby into the river, he tells it to A. Go down in the street and rot and tell them that way.

Uncle John is telling the baby to show the rich landowners what their greediness has done.

Uncle John sends the baby down as a symbol of the great suffering the have-nots have been through, saying, maybe they’ll know then. The last symbol of optimism comes when Rose of Sharon nurses a dying man. The man has been deprived of food for six days and is not able to digest solid foods. Rose of Sharon, after just delivering a stillborn baby, understands the situation and lets the man drink her milk. This action shows the tremendous growth Rose of Sharon has gone through as a person and ends the novel with optimistic gestures of generosity and unselfishness.

Optimism in The Grapes of Wrath. (2016, Jul 03). Retrieved from https://studymoose.com/optimism-in-the-grapes-of-wrath-essay?post 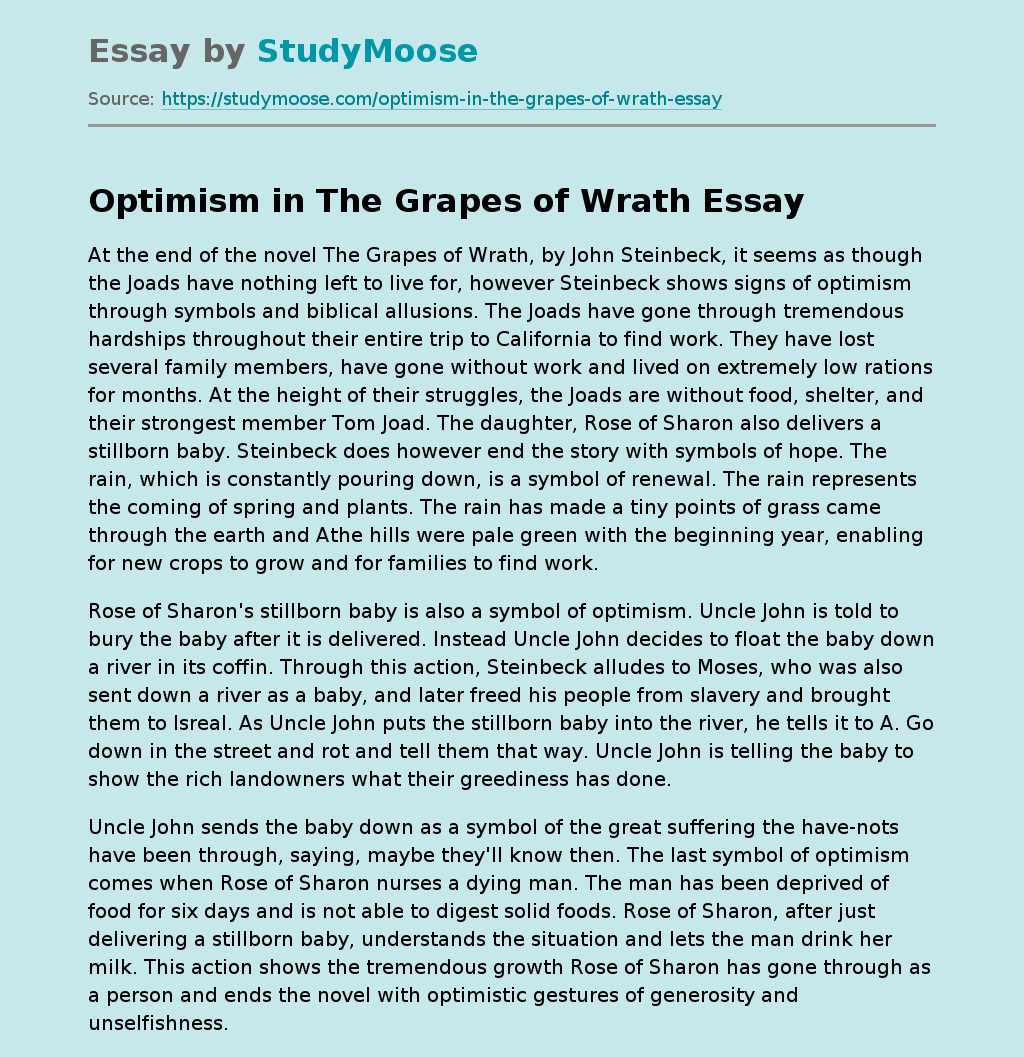