Nonsense in Alice in Wonderland

Alice in Wonderland is a tale that ends with death, and violence lurks within all of its nonsense. Throughout the book, Alice grows and matures, just like we do; however, all journeys must come to a close and death is always at the end of the road. Carroll neither forestalls, nor denies the realities of death and loss in his book. If anything, he manifests the prevalence of its threat in everything. Instead Carroll soothes his readers for the pain and loss with nonsense-answers in excess of sense.

Don't use plagiarized sources. Get your custom essay on
“ Nonsense in Alice in Wonderland ”
Get custom paper
NEW! smart matching with writer

He asks his readers to trust in another logic beyond the rational and believe in precisely what we cannot know.

In wonderland, death is a present and probable outcome everywhere, and Alice is promptly introduced to the possibility of it when she enters wonderland. After becoming enlarged after eating a piece of cake, Alice became scared of her sudden, large state. In the midst of her despair, she sees the White Rabbit and calls for his help.

He was startled by Alice, and dropped his fan before scurrying away in fright. Alice became hot and irritated and began fanning herself; however, she realized that her fanning was causing her to shrink. She immediately, “dropped it hastily, just in time to avoid shrinking away altogether.

‘That WAS a narrow escape!’ said Alice, a good deal frightened at the sudden change, but very glad to find herself still in existence.” This “narrow escape(Carroll)” accentuates Alice’s childlike naivety upon entering Wonderland. She has never had to worry about dying, but now she is faced with it head on.

Shortly after this near death experience, Alice is confronted with an identity crisis prompted by an interrogation from a caterpillar.

“Who ARE you?” asks the Caterpillar, to which Alice replied, “I—I hardly know, sir, just at present—at least I know who I WAS when I got up this morning, but I think I must have been changed several times since then (Carroll).” Alice has only been in wonderland a short period of time and already she has transformed in more ways than one. Her experiences have made her question her previously stable identity because in Wonderland-nothing is as it seems.

As Alice ventures on into Wonderland and Looking Glass Land, death becomes even more of a reality. The Queen of Hearts is one of the many obstacles Alice runs into in Wonderland, and, by far, the most threatening. The Queen exclaims, “OFF WITH THEIR HEADS,” in response to most situations. During the trial, the queen says the subject must have a, “sentence first—verdict afterwards,” to which Alice replies, “Stuff and nonsense! The idea of having the sentence first!”After refusing the queen’s order to be quiet, Alice is sentenced to a beheading (Carroll). The theme of death is also prevalent when Alice converses with the Mock Turtle who is very aware that he will soon be made into Mock Turtle Soup.

The Mock Turtle and the Gryphon spend most of their time with Alice telling her about their school days. The subjects they studied are strange undersea parodies of real school subjects, just as the dance they perform for her, the Lobster Quadrille. This makes them real and relatable characters, one of which inevitably faces death. Alice realizes this and is careful when referring to lobster as “dinner,” which she nearly does several times (Carroll)`. In Looking Glass Land, Alice runs into Tweedledum and Tweedledee who tell her the story of the Walrus and the Carpenter that lure the little oysters away from their bed by enticing them with a nice walk on the beach. The young, naïve oysters, willing for an adventure.

During their walk on the beach, the Walrus says, “If you’re ready Oysters dear,/we can begin to feed.” “”But not on us!” the Oysters cried,/Turning a little blue,/After such kindness, that would be/A dismal thing to do!” The walrus ended up eating all the oysters (Carroll 2). Although the oysters died in the end, they went on their adventure thinking that it was all innocent fun and games. Throughout these stories, Carroll invites us to believe in the nonsense. Although we may grow old, and we may die, we must not forget that child hood is the most important time because we have no preconceived notions of the world. Anything is possible if we believe it, and things have whatever meaning we give them.

Time, in Wonderland, is of the mind. However, in the real world, time is generally perceived as a unit—hours, minutes, and years—and age is time from a certain year. We accept that the time mirrored on a clock and our ages are one in the same. However, a clock may cycle endlessly, whereas we have only one lifetime. Therefore, our age is simply our own fabrication. It is the product of an irreversible psychological sense of duration. Mad Hatter says of Time, “Now, if you only kept on good terms with him, he’d do almost anything you liked with the clock (Carroll).” In Wonderland, the aboveground conception of time as a reliable, unchanging system does not hold.

Time is represented as a person, and is therefore susceptible to all the foibles and inconsistencies that plague actual humans. Defeating time thus changes from Alice’s normal conception of observing the regular intervals that time sets to meet to the Hatter’s idea of a grudge against a personified time. Since time is now like a person, there is the inevitable danger that he will rebel and refuse to be dependable. It is yet another haphazard, changeable artifact that has no claim to absolute validity in Wonderland. That is exactly what has happened in this Wonderland tea party: the Hatter says time “won’t do a thing I ask! It’s always six o’clock now (Carroll)”; that is, it is always teatime.

Therefore, time is frozen, and one of the most essential models of common human understanding are laughed out of reality. Through making time insignificant to the goings on of daily life, Carroll intended to highlight the subjectivity of age and time. So what if eighty years old means death is on the doorstep? What is time and age but a means of measuring, and who needs that? Even though growing old is inevitable, Carroll insists with the nonsense of the tea party that time does not have to go on. It can always be teatime. It can always be childhood where things do not have to have answers to make sense.

Despite the fact that Alice is growing and maturing, and despite the fact that death is an inevitable step in the process of life, Carroll wants to leave us with one thing: Believe in nonsense. His method was to imagine a dream-state in which the ordinary ways of logic were replaced by fantastic ones. Within the dream-logic, everything is consistent, but queer. That is the point-life in wonderland is nonsensical, but it is consistently nonsensical; therefore, the nonsense makes sense, so who is to say that the real world sense makes sense? Most importantly, we must remember the significance of childhood-no matter how old we get, for as long as one believes in nonsense, they will be happy no matter what ails them.

Nonsense in Alice in Wonderland. (2017, Feb 18). Retrieved from http://studymoose.com/nonsense-in-alice-in-wonderland-essay 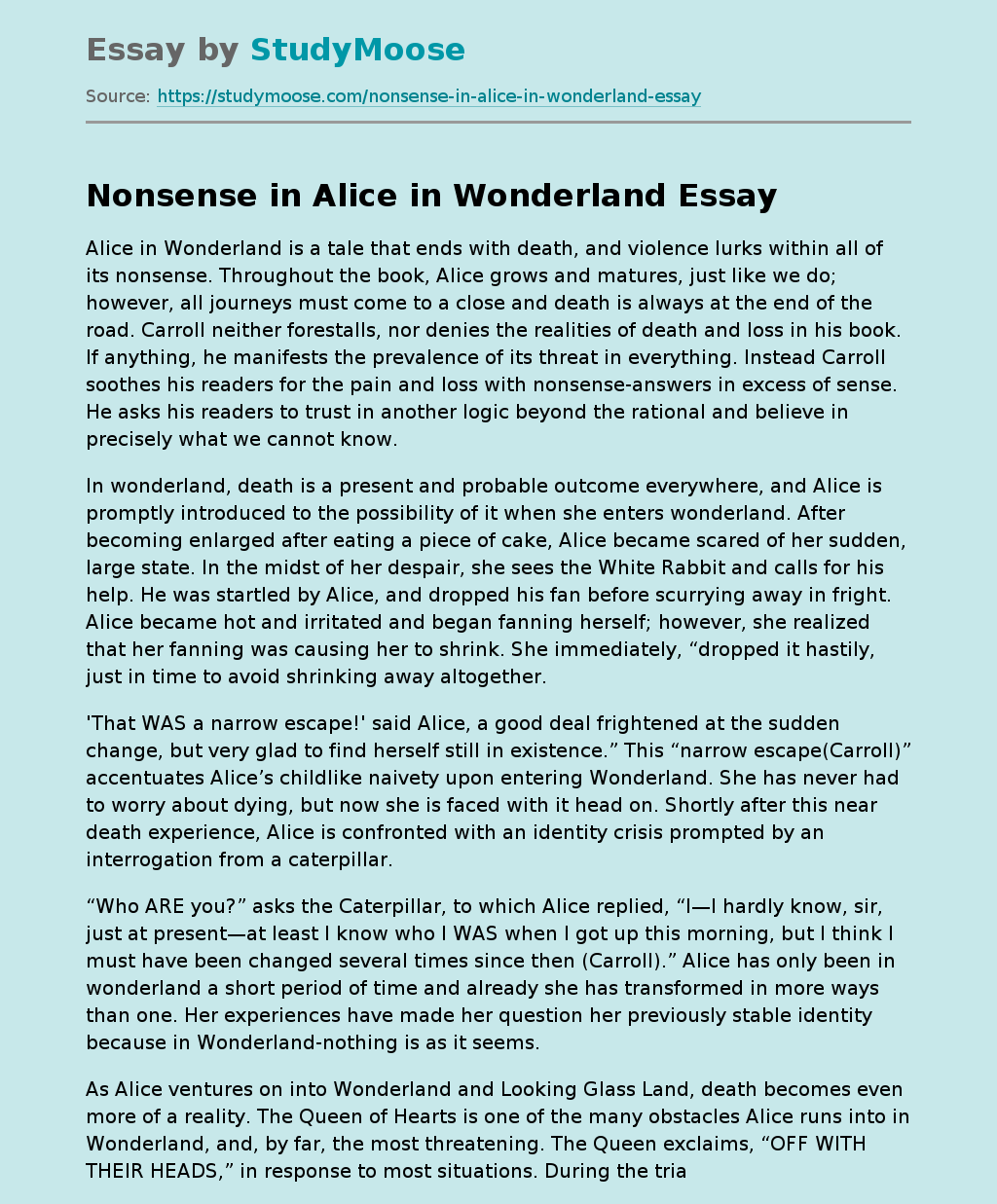