Does Nokia have a truly global strategy, rather than just a series of regional strategies? Explain.

Yes, it does have a global strategy. The global strategy of Nokia is the foundation of all the regional strategies and that is based on overall consumer needs. They found out the main consumer needs is focused on selling products (phones) as lowest price all over the world with its simple, easy and basic models. Also beside that Nokia has series of regional strategies that use most advanced technologies in terms of Camera, music and nanotechnology which is the future feature of the phones in e flexible shape and the last not the least is focusing on the business communications to compete with other companies in the industry and keep its position as the market leader.

Therefore they placed their strategy in 3 facets:

Consider the different global marketing environments discussed in the text.

How do these environments differ in developing versus developed countries?

Nokia, tries to get highest number of Nokia users not only through the low cost and simple mobiles that are mostly sold in the developing countries, it is also trying to grow in the niche markets that other competitors are focusing on such as the touch screen phones that were first introduced by Apple’s, and music focus products such as i-pod, in camera is competing with other phones and Canon as having more sales than Canons, and the business communication phones with advanced technology phones. The high amount of investment in R&D and expanding the range of products are all part of Nokia’s strategy in order to stay in the market and keep its position as the market leader for a very long period. I personally admire Nokia’s strategy as it is this keeps the Nokia brand name always speeded around for all the segments needs which is the main global aim of the Nokia meeting what the consumer want.

Can competitors easily replicate Nokia’s global strategy? Why or Why not?

I don’t think so. As other companies are only focusing on their specific niche and investing in other niche needs high investment and it’s already taken by Nokia, and the only way is possible if there will be high investment in these companies to compete with Nokia. As most of the competing companies are not only Phone producers, they are producing a other electronic devices as well and their profit is gained from the whole range of their electronic devices that they sell and focusing only in one different targets of one single product (Mobile phone for low income individuals) would not be very beneficial for them to invest is. (Such as Samsung; Smart TV, mobile phones, Washing Machine, ….) But in future (about 20-50 years from now) I think as we go further the old technologies will be cheaper and cheaper, in a way that there will be less demand for these low cost mobile phones as most probably these will be available for free or maybe they will not be used at all as there are new products or devices that will be introduced that will replace the Mobile phone the same for other electronic devices who knows…?

Will Nokia’s planned expansion into other products and services work? Explain.

In my opinion it won’t. As I have read in many places that Nokia had released a Laptop and its sales was not successful. I think Nokia is knows as a Mobile Phone producer and has to focus more on that market only. As if it produces other electronic devices, Nokia’s customer will lose their focus on the Nokia as the leader in the Mobile phone devices. Nokia if is trying to expand, its better to use the sample production as laptop, tablet for very limited period, as limited period only and study the market demand. If it was successful (which it was not in the first place) can expand its products slowly in the business-communicating devices only. 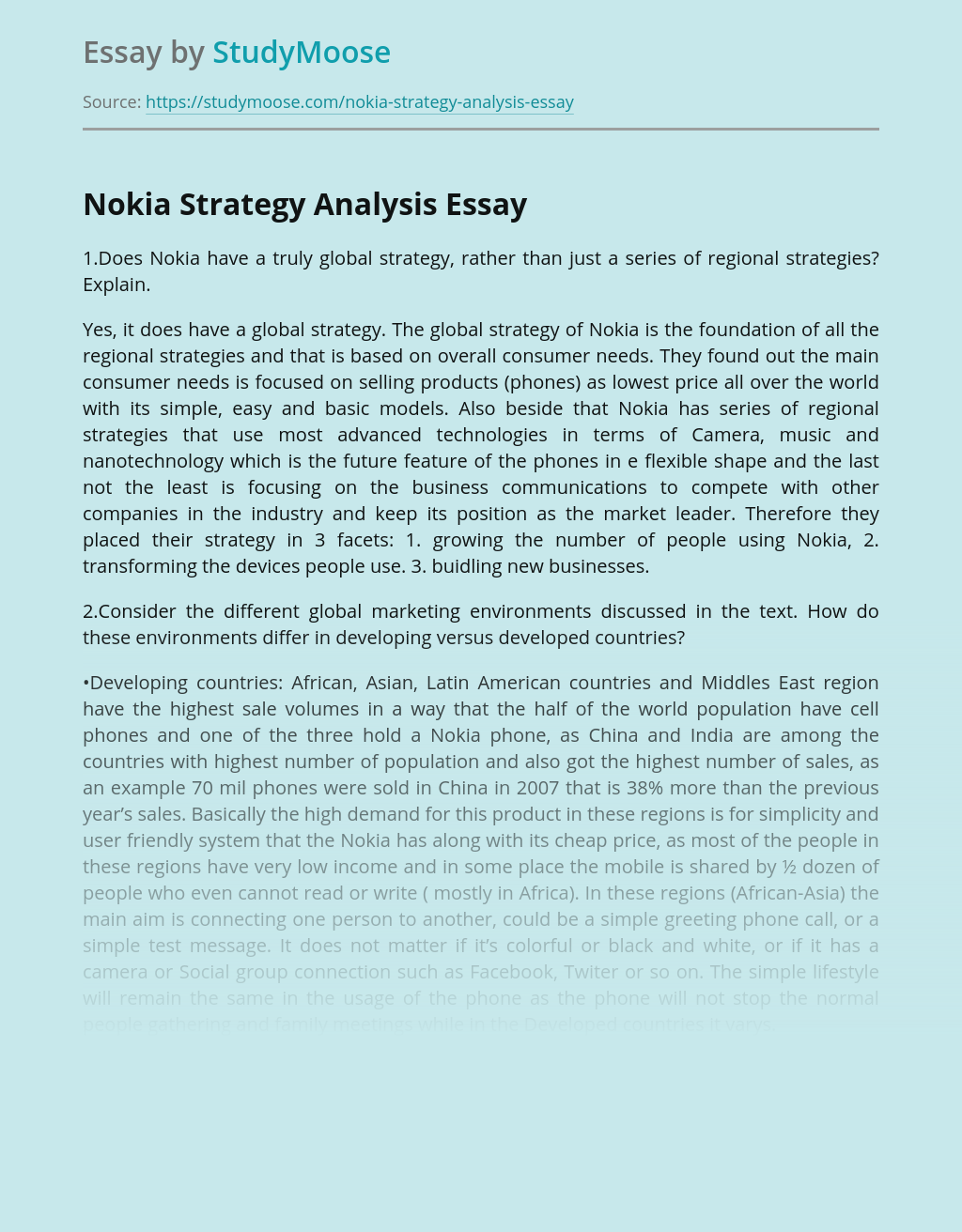