Newspapers have been a very important aspect of our lives for hundreds of years and the only window for people to the news around the world for quite some time. From the origin of printed press in Italy, to the first newspaper in Britain discovered by Mr. George Chalmers in 1558 reporting on the Spanish armada, to the New York Times and the Wall Street Journal in the 1920’s writing on latest reports on the Wall Street crash to the news around the world relating the incident of 9/11, newspapers have certainly been an integral part of our daily existence.

Don't use plagiarized sources. Get your custom essay on
“ Are Newspapers necessary today? ”
Get custom paper
NEW! smart matching with writer

But with the new era of 21st century, where other dominant media such as internet, television, and radio to a certain extent, have almost taken over our entire lives completely, have the good old newspapers lost their relevance over the years? Are newspapers necessary in today’s era? Well, in my opinion newspapers are certainly necessary in today’s world and are not overturned by the emerging media and here’s why? Take for example, your own daily lives.

Most people all around the world begin their day with none other than reading the newspaper and understanding about the events and happenings in their respective country and around the world.

Whether it is in the toilet or on the breakfast table everyone is attached to the newspaper in the morning. Our dependency of newspapers is clearly evident in the example above. Many people say that newspapers are unnecessary and redundant, but the printing press as it was once called is very much alive, such that almost every second family has access to the papers.

Some people believe that newspapers are mostly read by the older generation of people, above 50 who think and believe in the old practices. They claim that the younger generations do not believe in reading papers at all.

Well, a recent finding by The USA Weekend Survey1 of 65000 students revealed that teens in America are not only reading newspapers but also find them relevant and reliable. Even the Newspaper Works2 survey suggests that newspapers are on the personal agenda on all age groups surveyed, not just older people. Others claim that it is better to follow the lead of internet, television and radio, but newspapers are vital to maintain good old habits in the coming generation. With extensive technology, reforms and gadgets, reading might almost get as extinct as a dinosaur.

Therefore it is essential to keep newspapers, to instill reading habits in children and make them more aware of issues around the world. Besides, newspapers provide much more informative and educative content as compared to television and the radio. Moreover, as the Newspaper Works survey suggests, 90% people are more focused when they read as newspaper as compared with a mere 50% for television. Watching news on T. V is a waste of time as most people spend maximum time changing channels than actually learning anything substantial.

Newspapers also provide qualitative analysis with a high level of integrity unlike the much hyped media that only looks for breaking news. Environmentalists often remark it is better to catch up with news on the internet or television than with newspapers as million of trees are cut to make these papers. Well, television and internet aren’t environmentally friendly either, as they waste electricity and power which are the prime sources of pollution, carbon-dioxide emissions in the atmosphere, the breaking up of the ozone layer and global warming. 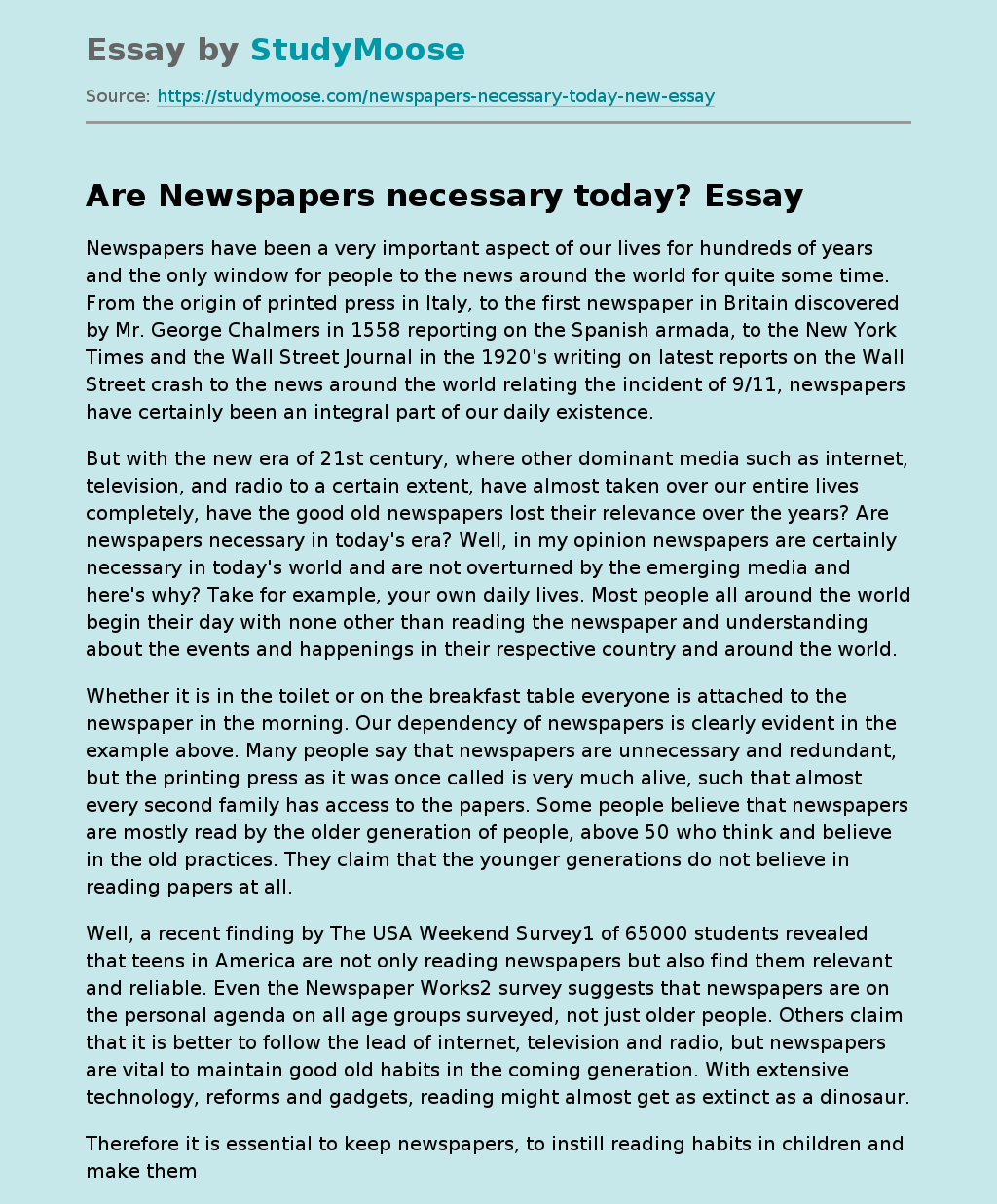