The New Deal and the wall street crash

Wall Street crash severally affected the U.S economy, immediately after the crash there was down turns in spending, which in turn lead to the closing down of many factories and farms. Those who had borrowed money to by shares in the first place had no money to pay the bank back, which soon lead o the closing of hundreds of banks all over America, in 1929 659 banks failed, in 1930 1352 banks failed and in December 1930 the United States bank in New York went bankrupt.

Don't use plagiarized sources. Get your custom essay on
“ The New Deal and the wall street crash ”
Get custom paper
NEW! smart matching with writer

This caused panic all over the U.S and everyone no longer trusted banks, people started to withdraw all of their money and store them in safety deposit boxes or at home, this lead to a further 2294 banks to go bankrupt in 1931. People were no longer spending money. Between 1938 and 1933 production from industries and farms fell by 40% and wages dropped by 60%.

American people began to lose faith in the ability of Hoovers government to solve the crisis because it took Hoover until 1932 to actually accept that there as a crisis in America, before that he kept telling the nation that every economy goes through a boom and a bust, and even after he accepted the matter he continued to believe that ‘prosperity it just around the corner’, farmers started to turn on Hoover, a young, President of the farmers union of Wisconsin said ‘the farmer is a naturally conservative individual but you could not find a conservative farmer today!’.

Hoover was soon known as the ‘do nothing’ president, although Hoover did try and help the situation by cutting taxes and setting up the Reconstruction financial company to help business’s he just made things worse.

Roosevelt was seen as a contrast to Hoover in the 1932 president elections because, although Roosevelt’s plans were vague and general, he was promising action which he knew was what the U.S people wanted from their government, he had plans to use public money to get people back to work, as being the governor of New York he had already started doing this in his own state, and unlike Hoover Roosevelt was not afraid to ask for advise on important issues from experts in that area. He went on a 20,800km campaign on which he gave a large number of speeches which in turn lead to him winning the vote by 7million.

In one of his campaign speeches Roosevelt stated ‘I Pledge myself’ this promise showed that he truly did care about the American people. He is giving himself to the country. This was much different to Hoovers approach as Hoover did not do everything in his power to help his nation because he had too much pride to admit he was wrong or to ask for help.

Roosevelt stated that this was more than a political campaign because he was not only fighting to be president but he was also fighting to improve the economy, he wanted to protect peoples savings and property, to get all Americans back to work and to get the U.S agriculture back on its feet and in Hoovers last speech he had said that this was a political campaign. ‘This crusade to restore America’ was meant by Roosevelt to show that this campaign was almost religious and it was morally the right thing to do to vote Roosevelt President.

By ‘To wage a war against destruction, delay, deceit and despair’ Roosevelt was talking about, ‘destruction’, being the Wall Street Crash, ‘delay’ being Hoover with his do nothing policy. By ‘deceit’ Roosevelt was referring to the lies Hoover had told the country about where the root cause of the problems in U.S.A were, Hoover had said the problems had come from Europe when in actual fact they had come from U.S.A, ‘despair’, is the desperation of all people in America who are scrounging for food, water, clothes and somewhere to live, finally by ‘with confidence we accept’ Roosevelt was showing his confidence and the enthusiasm he has to get America back on its feet and shows his determination to do it.

The tree main reasons why Roosevelt was elected President were the following;

* The previous President Hoover had done nothing at all to help the situation in America therefore the people wanted someone who would save them.

* The depression. If this had not happened then the people of America would have being fine with President Hoover as he was just letting everyone get on with it.

* His personality. Roosevelt was always very energetic and always full of confidence which people were looking for in a president as it gave them security.

Essay on Finance
Cite this page

The New Deal and the wall street crash. (2020, Jun 02). Retrieved from http://studymoose.com/new-deal-wall-street-crash-2-new-essay 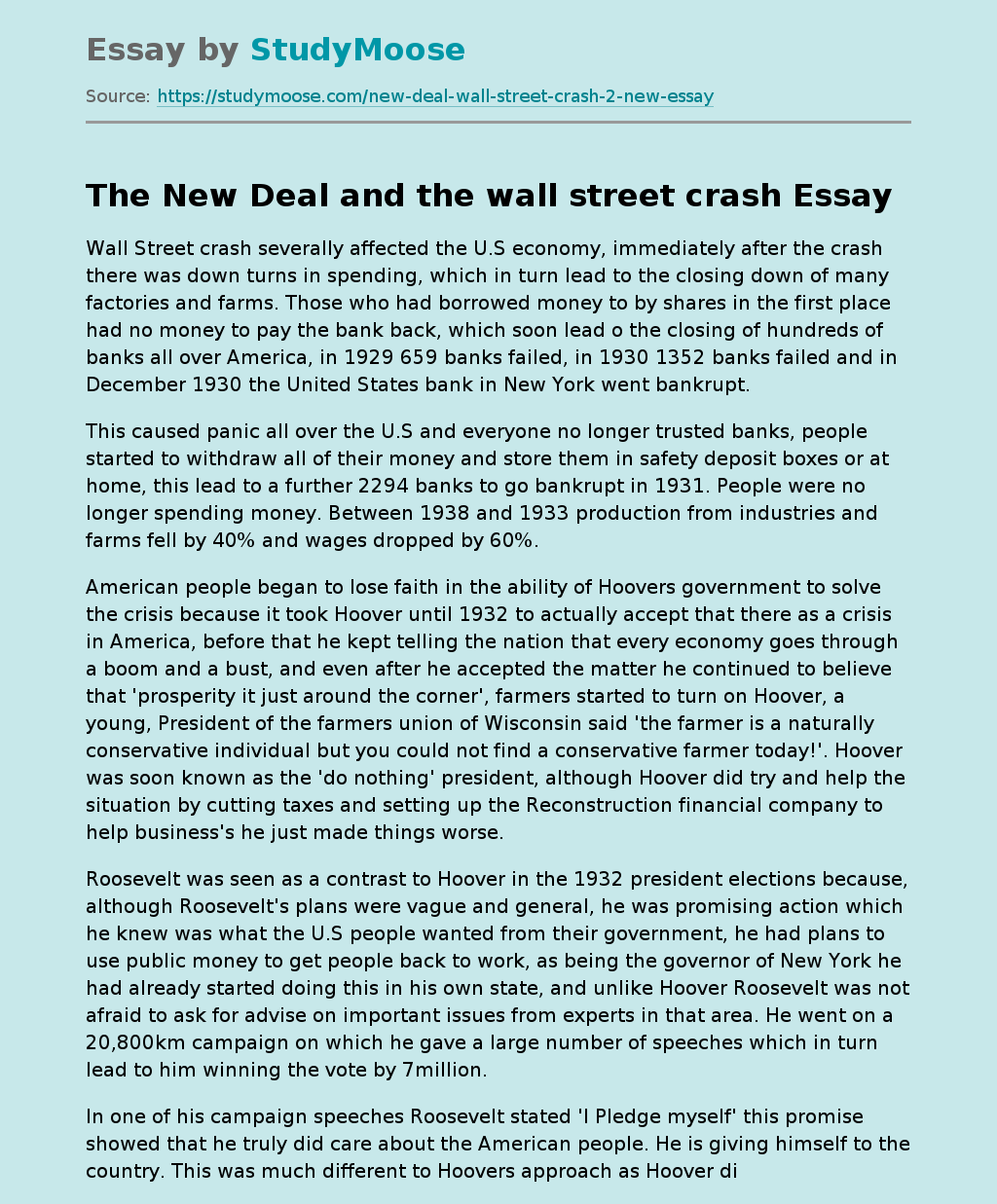