Nature and Nurture in Frankenstein

For centuries, there has been enormous controversy over whether inherited genes or environmental influences might affect one’s personality, development, behavior, intelligence and ability. While it is clear that physical characteristics are hereditary by nature, nurture is mostly in control when it comes to an individual’s manners and character. Nature and Nurture are both major contributors to the development of the monster’s behavior in Mary Shelley’s Frankenstein. Since the beginning of life, nature and nurture have influenced all living things to learn, live, and survive.

Don't use plagiarized sources. Get your custom essay on
“ Nature and Nurture in Frankenstein ”
Get custom paper
NEW! smart matching with writer

Nature represents the biological qualities that organisms inherit at birth, while nurture represents the qualities that organisms acquire from society. In the novel, Frankenstein, Mary Shelley portrays the theme of nature versus nurture through characterization, setting, and irony in order to show that the creature created by Frankenstein would not have been a monster if society had not influenced him to be that way. The theme of nature versus nurture is portrayed through characterization of both Frankenstein and his creature.

It is a certainty that no one is able to have a kind and amiable stance on life when even its own creator or parent rejects it. Throughout Frankenstein, Victor Frankenstein rejects his creature that he had previously been so obsessed with. After spending months toiling over the creation of his product, the creature finally comes to life; but instead of being ecstatic and delighted, Victor is frightened by this and flees from the creature that so desperately needs him. He abandons the creature out of disgust because of its deformities and therefore initiates its long reign of terror against Victor’s friends and family.

Because Doctor Frankenstein refuses to have anything to do with his creation, the creature is immediately afraid to trust and must learn the ways of life on his own. The creature is thrown into a world of misunderstanding and prejudice. It begins its life as any other baby, hungry for attention and the need for love and compassion. He, the creature, approaches humans in hopes of being accepted, but is beaten and unwelcome in return for his unguarded advance. He does not understand this, and is hurt and broken by the events that took place.

In contrast to Victor Frankenstein, the creature longs for acceptance of society and its company. The creature is more emotional and more sympathizing than his maker (Bloom). Upon the brutality he receives from the village, he hides in a family’s farm. He gains intellect and many abilities such as speaking, reading, writing, and even the understanding of chores and poverty by simply observing this family known as the De Lacey’s. Although he is known to readers of Frankenstein as a monster, it is clear that the creature did not begin that way.

After spending time watching and observing the De Lacey’s, the creature is amazed by these wonderful people. He is kind towards them and even assists them by picking their vegetables and shoveling pathways for the girl known as Agatha. “My heart yearned to be known and loved by these amiable creatures; to see their sweet looks directed towards me with affection was the utmost limit of my ambition” (127). The creature cares for this family and shows signs of consideration. It is not until the creature presents himself to the family he admires so greatly and is beaten and rejected by them that he declares war against the human species.

The idea is made apparent by Mary Shelley that the monster was not born a monster until society refused to nurture him and pushed him to his breaking point. Another factor that played a very significant role in the theme of nature versus nurture in Frankenstein is the setting of the novel. Much of the creature’s beginning takes place near Ingolstadt. Upon leaving the dormitory in which he was created, he ventured to a nearby village and was at once beaten and rejected by the people who surrounded him. That was a recipe for a poor outlook on life for the creature.

Later it says about the situation, “The whole village was roused; some fled, some attacked me, until, grievously bruised by stones and many other kinds of missile weapons, I escaped to the open country and fearfully took refuge in a low hovel…. ” (100). The creature was given all the worst circumstances from the very beginning, which eventually led to him lashing out for revenge towards humans, who all despise and hate him. Perhaps if the creature were introduced to an accepting environment and setting, it would have acted more appropriate with respect to the humans that surround him.

Aside from the miserable environment of people the creature was placed in, part of the setting which influences the readers’ feelings toward the creature is the time period that the novel is set. Mary Shelley set the novel in the time period of her day, which makes the creature and the story’s events much more realistic and lifelike than if it were set in the middle ages like most other romantic novels of her time (Griffith). Doing so causes readers to better understand the despair and sadness the creature feels and allows them to understand why the lack of nurture towards the creature influenced it to behave the way it did.

The setting including both the place and time period play a huge role as to why he was mistreated and not nurtured; therefore causing him to be a monster. A final but still very important aspect in the theme of nature versus nurture is the wide array of irony included in the novel. Although it would be expected for Victor Frankenstein to take full responsibility for his actions and to try to correct the problem, he does not. In fact, he considers himself a victim and even free of all guilt. “I felt as if I had committed some great crime, the consciousness of which haunted me.

I was guiltless, but I had indeed drawn a horrible curse upon my head, as mortal as that of a crime” (158). It is horrendously ironic that he does not believe he should be to blame for the deaths of his family members by the monster when it is he that created it. If he would have taken care of his creation and raised it properly in the first place, there would be no victims and therefore nothing to take any blame for. It could have been brought up similarly as any other human, with kindness and happiness towards others, if Victor had just given it the time and effort.

The creature requires love to become kind but because love is denied him, he is a monster indeed (Oates). Blame is entirely on Victor Frankenstein for the deaths in his family since he created the creature in the first place, but he refuses to take fault. The irony of Victor essentially murdering his own family makes it ludicrous for him to take no liability and place the entire fault on the creature that he obsessed over to create. Mary Shelley shows the theme of nature versus nurture using various techniques throughout the novel of Frankenstein.

It was the initial rejection of the creature’s creator that led to its thirst for the vindication of the unfairness with which he had been treated. If the creature had been treated with decency and had been nurtured by his designer, it would never have become the monster it is viewed as today. Living things naturally need some source of guidance and nurture to become their greatest. Nature and nurture play leading roles in every organism’s life, including those even too hideous to fit in. Works Cited.

Nature and Nurture in Frankenstein. (2016, Nov 13). Retrieved from https://studymoose.com/nature-and-nurture-in-frankenstein-essay 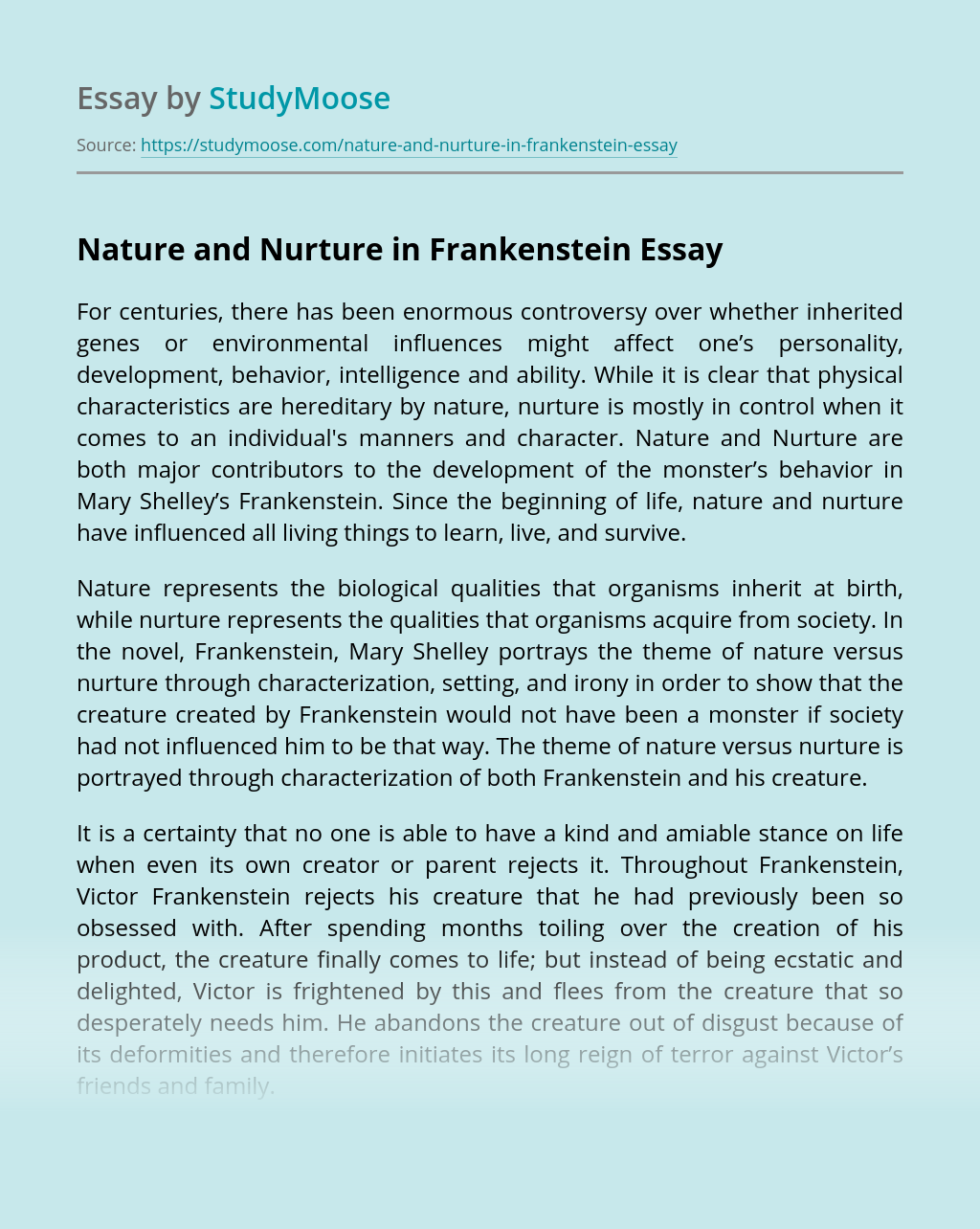