This study aims to use used cooking oil as shoe polish rather than just throwing it away (which can cause drainage clogging). Calamansi juice is also added to add more viscosity to the product. This study also promotes natural and organic products.

Oil is one of the basic needs in our home. Yet, it is very expensive nowadays. Now, as a student researcher, I want to conduct an experiment on how to use used cooking oil in a very convenient, practical and useful way.

Don't use plagiarized sources. Get your custom essay on
“ Natural and Organic Products ”
Get custom paper
NEW! smart matching with writer

That’s why I chose it to become a shoe polish. Since oil can become a drainage clogger when thrown in the sink, why not recycling it though some colloidal particles are still visible due to frequent frying?

Shoe polish is widely used by people especially by students, office workers, etc/ on their leather shoes. But the commercial shoe polishes were made of chemicals which can harm human’s health if used recklessly.

An oil is a substance that is in a viscous liquid state (“oily”) at ambient temperatures or slightly warmer, and is both hydrophobic (immiscible with water) and lipophilic (miscible with other oils, literally).

Many other kinds of vegetable oils are also used for cooking. The generic term “vegetable oil” when used to label a cooking oil product refers to a blend of a variety of oils often based on palm, corn, soybean or sunflower oils.

Shoe polish (or boot polish), usually a waxy paste or a cream, is a consumer product used to shine, waterproof, and restore the appearance of leather shoes or boots, thereby extending the footwear’s life. In some regions—including New Zealand—”Nugget” is used as a common term for solid waxy shoe polish, as opposed to liquid shoe polishes.

Various substances have been used as shoe polish for hundreds of years, starting with natural substances such as wax and tallow. Modern polish formulae were introduced early in the 20th century and some products from that era are still in use today. Today, shoe polish is usually made from a mix of natural and synthetic materials, including naphtha, turpentine, dyes, and gum arabic, using straightforward chemical engineering processes. Shoe polish can be toxic, and, if misused, can stain skin.

Calamansi or calamondin (citrofortunella microcarpa) belongs to the citrus family. It is a fruit tree native in the Philippines. The tree is low set, spreading and well branched. The leaves are broad and oval and dark green to pale green on the upper and lower surfaces, respectively. The fruit is usually small and round, ranging from 3.0 to 3.0 inches in diameter. The
rind may be thin or thick.

This study aims to use used cooking oil through making it into a shoe polish though its phase was already in its least. This study also aims on organic shoe polish with only using sources commonly available in our own homes.

This study only limits on the feasibility of using used cooking oil with calamansi juice as shoe polish. The calamansi is only used for adding more viscosity.

1) I will gather all the materials needed.
2) The oil is filtered using a clean cloth (twice this procedure) 3) After, the juice will be added slowly into the bowl while whisking. 4) The product
will be applied to a clean dry shoe.

B. Testing of the product.
To test the feasibleness, I will observe the shoes intensity of shine and the time to last its shine. Some people will also be gathered as sample to rate the product where there will also be a controlled and commercial.

To test the feasibleness, I will observe the shoes intensity of shine and the time to last its shine. Some people will also be gathered as sample to rate the product where there will also be a controlled and commercial.

An experiment had been conducted by me and I conclude therefore that my hypothesis was correct though the commercial is better. The basis for my conclusion is from the results conducted from a survey.

I recommend other people to conduct further study and experiment on how to reduce having a high risk to the community by just throwing away used cooking oil. 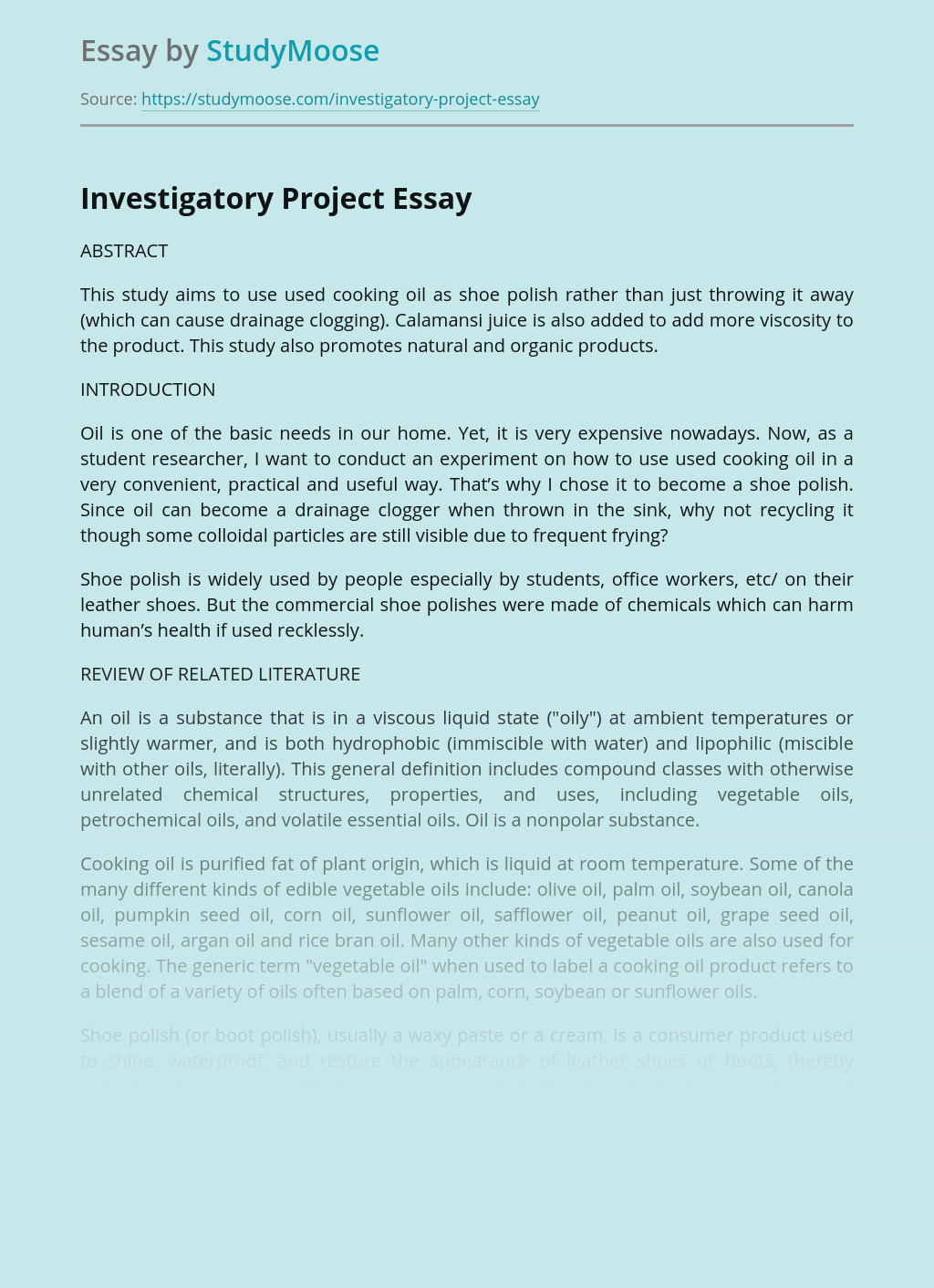