Is Lenore Skenazy the world’s worst mom? In 2008, there was an article released, “My Free-Range Parenting Manifesto,’ stating that a mother named Lenore Skenazy allowed her 9-year-old to ride a subway bus unsupervised. This event sparked controversy with many people because many believe that times have changed, and the crime rates have increased over the years. Skenazy later encouraged parents and non-parents with problem-solving skills, innovation, and confidence towards building protectiveness and still have the freedom many people had when they were kids.

Don't use plagiarized sources. Get your custom essay on
“ “My Free-Range Parenting Manifesto” Analytical Summary ”
Get custom paper
NEW! smart matching with writer

Studies state that 6 percent of kids ranging from the ages of 9-13 play outside unsupervised every day. What Lenore Skenazy is trying to do is to inform more than persuade that if kids don’t get the experience to be on their own and do things independently then how are they going to learn how to handle real-life situations without the protectiveness of overprotective parents. The risk factors of kids being locked away in the house because of fear can lead to obesity, diabetes, and depression, as referred to in the text, she concluded, “It is time to stop making ourselves crazy with fear.

” (Skenazy) and “Our kids have the right to some unsupervised time (with our permission) and parents have the right to give it to them without getting arrested.” (Skenazy). With all the crime and new laws that have been made because of those crimes parents are becoming more protective with their children, some parents even feel that it’s necessary and that parents can’t be too careful.

While others feel as if being overprotective is taking away outside freedom and fun.

Some may question, “Why did Senator Mike Lee create the free-range parenting law?” (Skenazy). The law was created because of the mistaken belief that “We can’t let our kids play outside like we did because times have changed.” (Skenazy).

In the year of 2014, Rhode Island legislators proposed a bill that would make it illegal for school buses to drop off children under the 7th grade. Parents often get investigated for letting their kids walk to the library, fast food restaurants, and even to school. Although the crime rate today has decreased because of the new laws, there is such a fear of catastrophe so parents still hold their children close. The author feels that most parents are putting their kids at risk for common health risks because of keeping their kids indoors, for example, in the article “How can we be the home of the brave when we’re too scared to let our kids go out and become smart, victorious, resilient, ingenious and unconventional by doing what we all did at their age?” (Skenazy). Free choice is important for kids and parents as well because it is building character and developing crucial skills that all parents want their kids to have.

Kids build a lot of skills naturally when they play on their own and make their own fun. When kids have to come up with something to do it leads to creativity and many other skills needed for later life lessons, for example, if he/she is playing a game that needs a ball but doesn’t have one then they would learn to accommodate and use something similar. On the other hand for the kids who is inside most of the time might not know how to accommodate certain situations, therefore, having less imagination and creativity. Child safety is very important to everyone but banning kids from going outside and be independent is not just keeping them safe it’s also crippling them at the same time.

Will “overprotective” parents take this into consideration? The article states, “It’s time to save childhood”, If the kids are still having no freedom within their childhood then when it comes to real-life tasks later in life it can lead to even more concern within the children and may even affect the parents eventually. 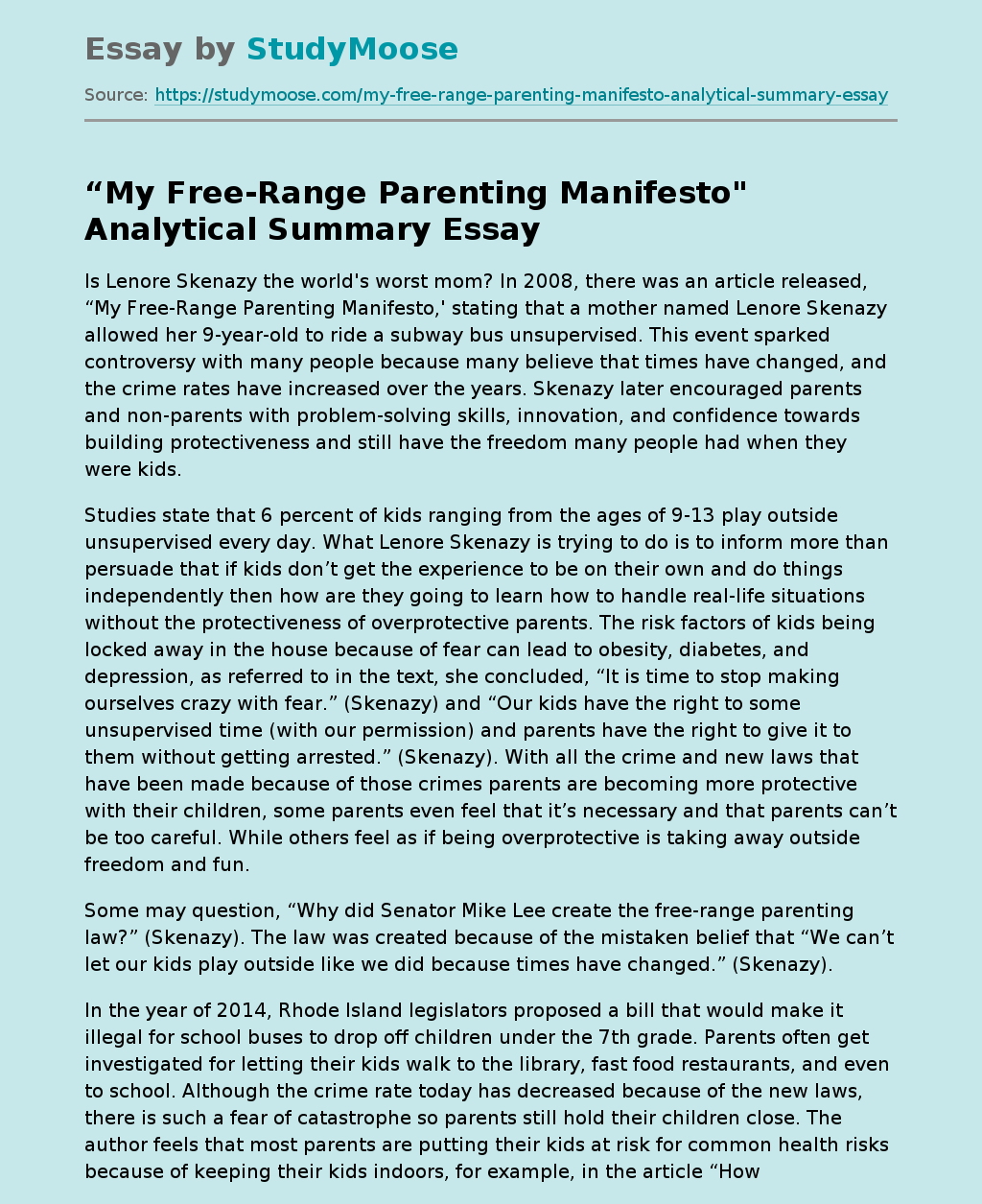