A Range of Causes of Dementia Syndrome

Neurodegenerative diseases is a common cause of dementia which means that the brain cells known at the neurons either are degenerating therefore the neuron die off quicker than that of the neurons of a normal aging processes. This will lead to a more decline in the persons mental health such as memory, language and sometimes their physical abilities all depending on which area of the brain is infected. These neurodegenerative diseases are known to us as Alzheimer’s, fronto-temporal dementia, and Lewy bodies are where over time a build up of abnormal protein deposits in the brain cause the gradual change and damage to the neurons which will cause the shrinkage of the brain.

Turn in your highest-quality paper
Get a qualified writer to help you with
“ A Range of Causes of Dementia Syndrome ”
Get high-quality paper
NEW! AI matching with writer

Dementia is anything which affects the brain and the loss of function of the brain in such a way that the things we normally take for granted for e.g. our ability to remember things such as time, date, events, to place ourselves in a location to use words, to use language all of these things begin to disappear.

Then there is the blood supply to the brain which is interrupted causing the brain cell to die, and resulting in brain damage. This is vascular dementia which is cause by either lots of small mini strokes or one large stroke as the oxygen and blood is restricted or stopped before reaching the brain cell. There is other more rare causes of dementia caused by depression, brain tumours, thyroid hormone, head injuries, alcohol abuse, Huntington’s disease, Creutzfeldt-Jakob disease, supranuclear palsy and corticabasal degeneration.

Some of these causes of dementia can also be dementia-like conditions which may be treatable or non-progressive. So therefore it is imperative that the person is diagnosed by a professional that deals with mental health diagnoses. Alzheimer’s disease is the most common of dementia which affects both memory and cognitive processes, such as our way of thinking, calculation, language and of planning process.

As the shrinking of the brain is so obvious in Alzheimer’s disease you will too notice the devastation taking place as the brain is destroyed by the tangles of protein which interfere with their functions and outside the neurons is the amyloid protein which interferes with the nerve cells. This affects the brain cells from communication with each other and they begin to die. So if the hippocampus (the part of the brain which is responsible for all our memories both storing and retrieving it) is the affected area of the brain then the memories become trapped or lost inside the hippocampus. Lewy bodies are small circular lumps of protein that deposits inside the neurons, although it is unclear how they damage the brain and cause dementia, there is a theory that Lewy bodies interfere with the effects of two of the messenger chemicals in the brain – dopamine and acetylcholine. Dopamine and acetycholine are thought to play an important role in regulating brain functions, such as memory, learning, mood and attention.

Lewy bodies is closely related to Parkinson’s disease as this condition deteriorates the physical symptoms like the Parkinson’s disease such as involuntary shaking, muscle stiffness and slowness of movement take place. Fronto-temporal dementia is caused by damage and shrinking in two areas of the brain. The temporal lobe and the frontal lobe of the brain are both affected and is only common in people under the age of 65 years old. It is said that it is an inherited genetic mutation (an altered gene) from their parent that cause this type of dementia. Although sometimes motor neurone disease is also associated with fronto-temporal dementia, however it is a rare condition that progressively damages the nervous system and causing muscles to waste away.

A Range of Causes of Dementia Syndrome. (2016, Mar 31). Retrieved from https://studymoose.com/a-range-of-causes-of-dementia-syndrome-essay 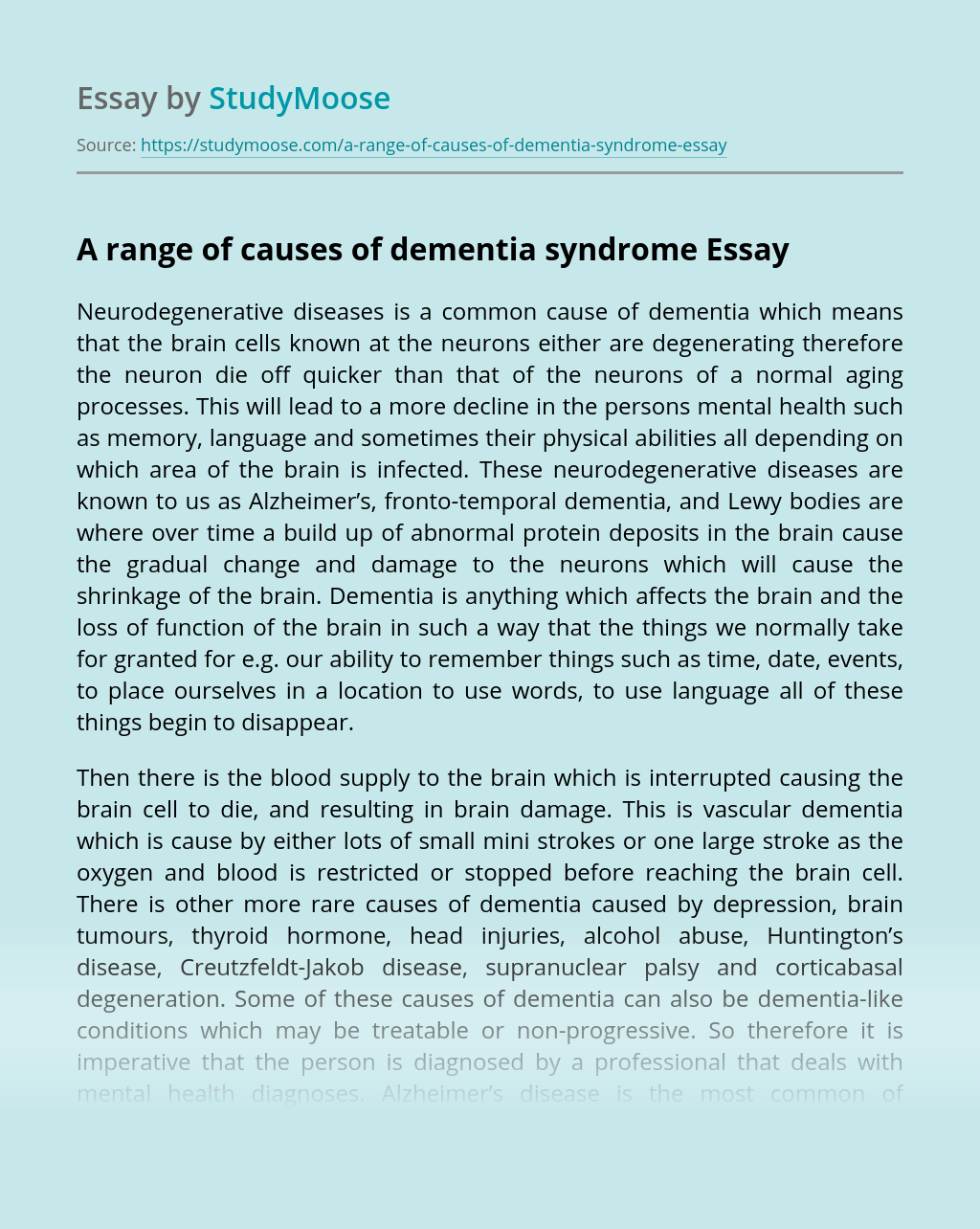 Turn in your highest-quality paper
Get a qualified writer to help you with
“ A Range of Causes of Dementia Syndrome ”
Get high-quality paper
Helping students since 2015
Stay Safe, Stay Original