My definitions of Mobility is having the freedom to move anywhere

My definitions of Mobility is having the freedom to move anywhere you like and not get hurt from doing that. In the same token, you can have things or society stop you from being mobile. The Autobiography of the Ex- colored man are story that display of not being mobile and disguise is true identity because of the way society functions.Beginning with an oblivious knowledge of race as a child ‘One day near the end of my second term at school the principal came into our room, and after talking to the teacher, for some reason said, ‘I wish all of the white scholars to stand for a moment.

Don't use plagiarized sources. Get your custom essay on
“ My definitions of Mobility is having the freedom to move anywhere ”
Get custom paper
NEW! smart matching with writer

’ I rose with the others.

The teacher looked at me, and calling my name said, ‘You sit down for the present, and rise with the others.’ I did not quite understand her, and questioned, ‘Ma-m?’ She repeated with a softer tone in her voice, ‘You sit down now, and rise with the others.’ I sat down dazed. I saw and heard nothing. When the others were asked to rise I did not know it. When school was dismissed I went out in a kind of stupor. A few of the white boys jeered me, saying, ‘Oh, you-re a nigger too.’ I heard some black children say, ‘We knew he was colored.’ ‘Shiny’ said to them, ‘Come along, don-t tease him,’ and thereby won my undying gratitude.'( page 1), and which racial group he belonged, to his well knowing of ‘white’ and ‘black’ and the ability to pass as both, the author is presenting himself as an outsider.

Because he is both a ‘white’ and ‘black’ male, he does not fit in with either racial group. In the autobiography of an Ex-colored man, James Weldon Johnson uses double consciousness to show the narrator stance as a person that gives up his birthright for the privilege of whiteness.

The narrator of Autobiography is equal parts compelling and frustrating because he, at times, seems to lack self-awareness. He offers many generalizations about “colored people” without really seeing them as actual human beings. He also does not take the time to understand why he feels the way he does.He alternate between a weak and strong will, intelligence and naivete, identification with other African Americans and a complete denial of them. He cannot seem to make a decision for his life without hesitating or wondering if it was the right one.

African Americans became increasingly mobile during the early twentieth century, as exemplified by the Great Migration that began around 1910. Reflecting the general anxiety about such racial mobility, the March 2, 1911, issue of The Independent included an article about racial passing, “When Is a Caucasian Not a Caucasian?” said,Masami Sugimori.

There are many causes that lead to his reasons for passing as a white man. Wandler argue that ‘From a certain perspective, the ex-colored man’s decision is anything but unreasonable, and no cause for self-censure. As a white man, he of course has access to opportunities (financial as well as social) otherwise prohibited him as a black man, but even more fundamentally, and more importantly, he does not have to face the very real dangers of being black in the

My definitions of Mobility is having the freedom to move anywhere. (2019, Dec 14). Retrieved from https://studymoose.com/my-definitions-of-mobility-is-having-the-freedom-to-move-anywhere-example-essay 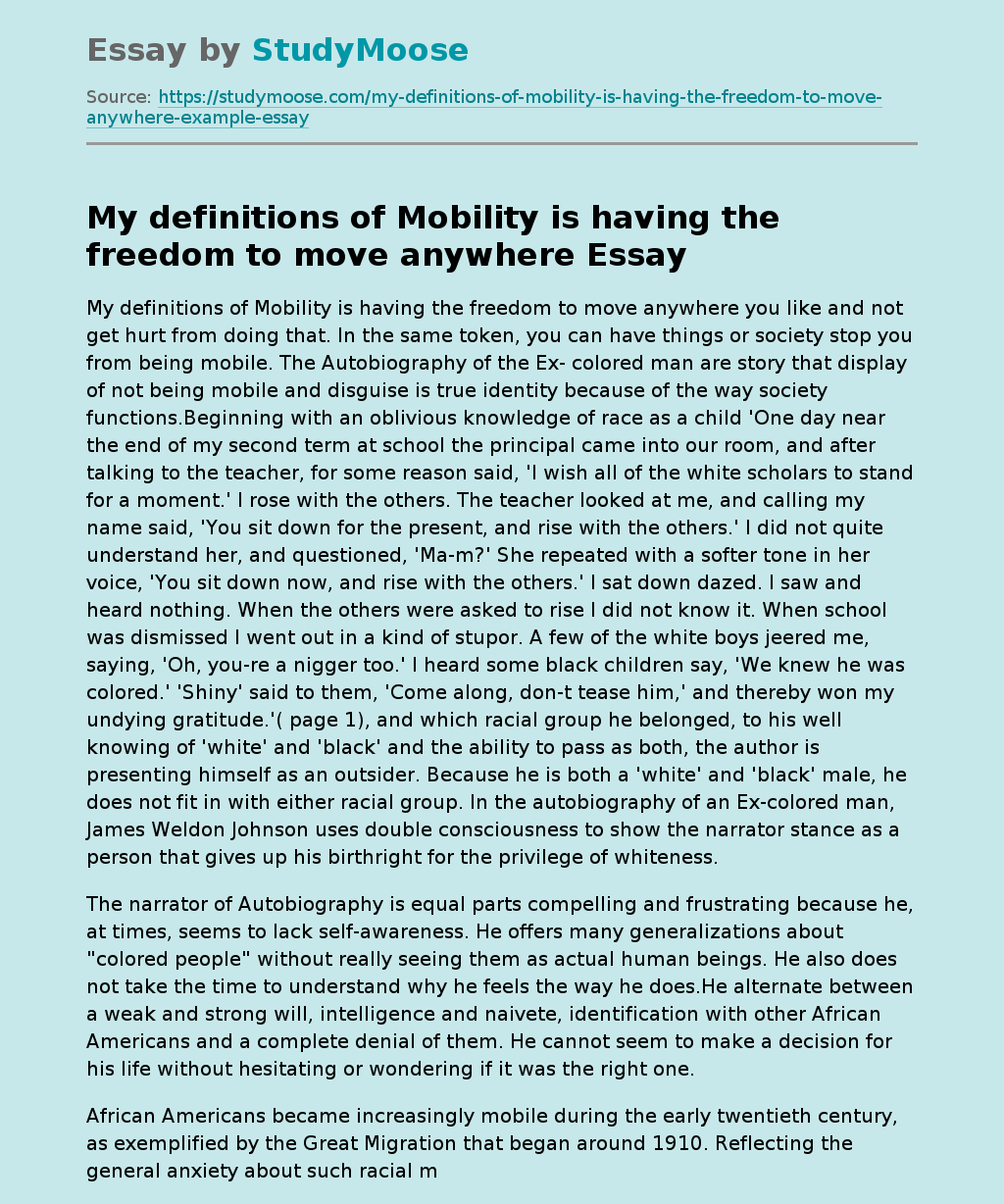