Shashi Deshpande is an award-winning Indian novelist. Shashi Deshpande makes gender central to her writing. In her story “MY BELOVED CHARIOTEER” she tries to the show the relationships of grandmother, mother and daughter at various stages of life. It is a story of a mother daughter relationship as well as a women’s role as a wife. Mother and daughter relationship is like sisters or sparring partners. They care for each other. My Beloved Charioteer depicts the life of mother’s nature and behavior not as generosity but as a normal human being full of negatives as well as positives, full of emotions as well as frustrations and not a perfect being.

Don't use plagiarized sources.
Get Your Custom Essay on My Beloved Charioteer Just from $13,9/Page

My Beloved Charioteer by Shashi Deshpande is based on the three generations, three women i.e. grandmother, mother and daughter and three different mindsets living together. Grandmother being the oldest one and the one who takes care of each and everyone in the house.

Mother named Arti the daughter of grandmother a depressed lady as for whom she cared and loved have died.

She loved two persons that is her father and her husband has both died. She is now the most irritated person in the house and she spends her most of the time smoking and looking at the walls of her room. She doesn’t talk to anyone neither to her daughter Priti and nor to her mother. She evens scolds priti for no reason .She is so much entangled with the past that her present is neglected. The daughter named priti the youngest and the most energetic character. Her father and grandfather had both died. Her mother doesn’t talk to her. Her caretaker and her best friend in the house is her grandmother (Ajji). When Priti is gone silence settles in the house. The relation between the Arti and Priti is not too good in the story.

Arti is depressed, sad, unhappy, and is in pain. She doesn’t do any work, which a mother should do for her daughter and for her aged mother. She doesn’t talk to Priti; play with her however she scolds Priti at times to show her anger, outrage and displeasure. Because of her nature grandmother Ajji have to take care of Priti, she acts like her mother. She wakes her, she dresses her for school, make breakfast for her. It is shocking to see that at this age also Ajji does all the work and she even doesn’t complain. The relationship of Arti and Priti is not good whereas the relationship between Ajji and Priti is good. Ajji once insist Arti to go out of house like park whereas in reply she says that seeing other people happy she wanted to kill and bury their happiness. This shows one of the natures of depressed lady.

Ironically Ajji’s husband’s room offers her the opportunity to find her voice, rebel against her daughter and break the silence that threatens to destroy her home and her granddaughter. The photo frame that was broken accidently by Arti gave a chance, which helped Ajji to talk to her and to explain her that what gone is gone. Ajji is also holding the pain of her husband but on the other hand she is managing and not running from her problems and fears. Priti has a daughter and she need to take care of her. Ajji also says that she does not want to ever see the photograph again as it is no point of seeing things which gives pain and discomfort. Arti needs to be happy at which she got rather than things, which she doesn’t have. Hence through this story Shashi Deshpande elegantly brings out the mother/daughter relationship on different stages and aspects of life. 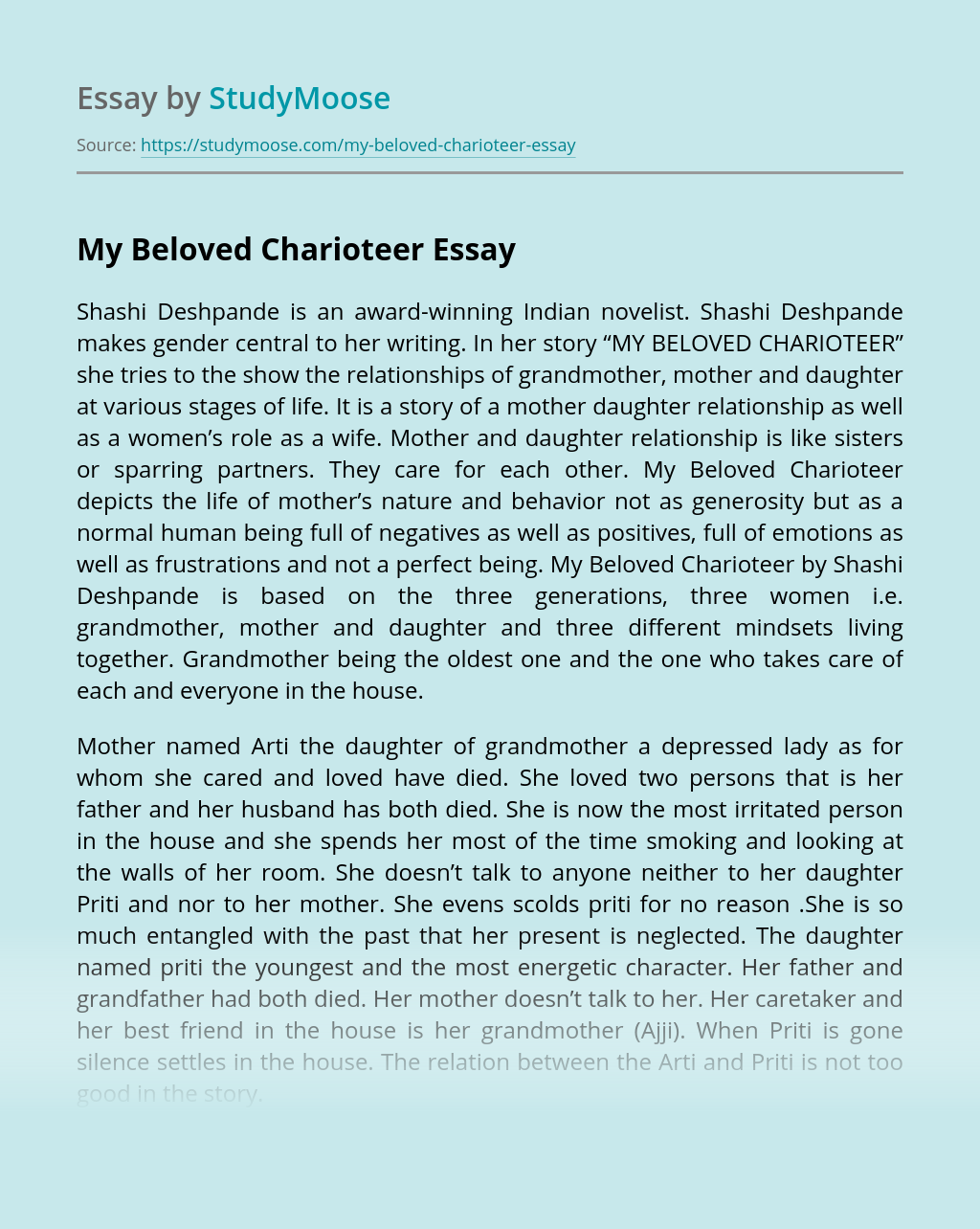 General George McClellan was the Union Army’s first commander in the early part of the American Civil War. Because of how the Union army was faring under his leadership, McClellan was regarded as an ineffective general, if not a failure. As a result of how he commanded the Union army and prosecuted the war, he... VIEW ESSAY

View sample
The Fog of War

In the opening scenes of the documentary, The Fog of War, Robert McNamara states, “Any military commander who is honest admits that he has made mistakes, errors of judgment. ” Throughout the documentary, I got the sense that McNamara is asking for forgiveness from the American public and is telling them that he wishes things... VIEW ESSAY

Human development begins at conception and continues right through to adolescence after which the young adult emerges. In order to inform best practice when working with children it’s important to understand the development of children and young people and some key concepts that affect it. Areas of Development Children’s development is often thought of in... VIEW ESSAY

Today, the depiction of war is becoming more vivid and realistic. Audiences are more critical of how a move catches the actual events that transpired and of how they can relate to the emotions in the movie. The movies “Saving Private Ryan” and “We Were Soldiers” are two of the most popular modern day films... VIEW ESSAY