Muhmmad Rahman Instructor: Curtis D Hosier, PhD Soc 1610103/28/2019Inside job: corporate responsibility.Inside job therefore the film brilliantly exposes the corruption in many corporate organizations, those are at fault for the crisis. Banking that led at 2008 was crashed.Charles Ferguson’s film inside job attempts to blame a wider cast list for the banking crash of 2008 and explains why so little has been done to reform the financial world or being criminal prosecutions against the main protagonists.The film showed that the banking become synonymous with living the high life, with drug-taking, and basically being above the law.

A major theme is the pressure from the financial on the political process to avoid regulation, and the ways that is exerted. One conflict discussed is the prevalence of the revolving door, whereby financial regulators can be hired within the financial sector upon leaving government and make millions.Point is the high pay in the financial industry, and how it has grown in recent decades out of proportion to the rest of the economy.

Even at the banks that failed, the film shows how bank executives were making hundreds of millions of dollars in the period immediately up to the crisis, all of which was kept, again suggesting that risk/benefit balance has been broken.One topic which few others have addressed is the role of academia in the crisis. Ferguson notes, for example, the Harvard University economist, and former head of the Council of Economist Advisers under President Ronald Reagan, Martin Feldstein was a director of the insurance company AIG and former board member of the investment bank J.

P Morgan and Co.Ferguson also states that many of the leading professors and leading faculty members of the economics and business school establishments often derive large proportions of their incomes from either engaging as consultants or speaking engagements. For example, current dean of the Columbia Business School, Glenn Hubbard received a large percentage of his annual income from either acting as consultant or through speaking engagements. Hubbard’s department of economics, John Y. Campbell, deny the existence of any conflict of interest between academic and baking sector. The credit ratings agencies and academics. When Glenn Hubbard, George Bush’s chief economic adviser and dean of Columbia Business School, is shown as a partisan advocate of deregulation. During the interview, Hubbard, who denies he was corrupted by his paid for relationships with government. There were plenty of economists who believed that the banks understood what believed the banks understood what they were doing and supported deregulation. The relationship between academia and business appears to be more arm’s length, though London Business School dean Sir Andrew Likierman sits on the Barclays board, while Howard Davies, who argued for light- touch regulation while head of the Financial Services Authority, has become director of the London School of Economics. Moreover, Chuck Prince, the CEO of the Citigroup at the time of the crisis, may have been overpaid- but I don’t think he was particularly at fault. At worst he perhaps should have known more about what was going. There may people lower down who knowingly did criminal things, but that is a different matter.Inside job clearly catches some of the anti-banker mood, and the public is quite right to be outraged at how banks refinanced at the taxpayer’s expense are paying outsized bonuses. Staff as banks such as the one being introduced at Barclays. But, as a free marketeer, I believe banks that have not taken public money should be able to do as they please within the law.This was well researched film that clearly explained the complexities of the crisis and the greed of bankers. It laid the blame squarely where it belongs- at the feet of bankers, of ratings agencies, of regulators and it interviewed a lot of heavyweight people, such as Domnique Strauss-Khan, Eliot Spitzer, Raghuram Rajan and Glenn Hubbard.Unfortunately, it’s clear that for many investment banks business continues pretty much as normal and that another crisis is only a matter of time. Sure, there’s greater scrutiny of bonuses- but many bankers think they were not responsible personally for the crisis and they’re worth every penny they’re paid. Clearly, they’re not.Of particular interest is the dubious role played by the academic economists, especially those in the US. Many were paid vast, undeclared sums to produce biased reports saying CDO’s and the other dodgy derivatives were safe, and that Iceland was fine to be gambling with 10 times its annual GDP. The Corruption of top US economists and their complete lack of awareness of what they had done truly shameful.The film suggested it was the bankers and the politicians who were driving the collapsed ” and fair enough, there was some mis-selling of mortgages. But it wasn’t just mortgages. It was bank debts, credit card debt, car loans. The film was very much in style, they’d clipped and edited the interviews to the twist slightly what was said in them- but it was also very watchable, succinct and very good at simplifying a chain of events. And the accusation that the worlds of academia a d politics were complicit in the crisis was completely valid.The film ends by contending that despite recent financial regulations, the underlying system has not changed; rather the remaining banks are only bigger, while all the incentive remains the same, and not a single executive has been prosecuted for their role in the global financial meltdown.Work sitedFerguson, Charles H., et al. Inside Job. Inside Job, 2010, watchdocumentaries.com/inside-job/.Kingsley, Patrick, and Phillip Inman. Inside Job: How Bankers Caused the Financial Crisis. The Guardian, Guardian News and Media, 17 Feb. 2011, www.theguardian.com/film/2011/feb/17/inside-job-financial-crisis-bankers-verdicts.Inside Job. IMDb, IMDb.com, www.imdb.com/title/tt1645089/plotsummary. 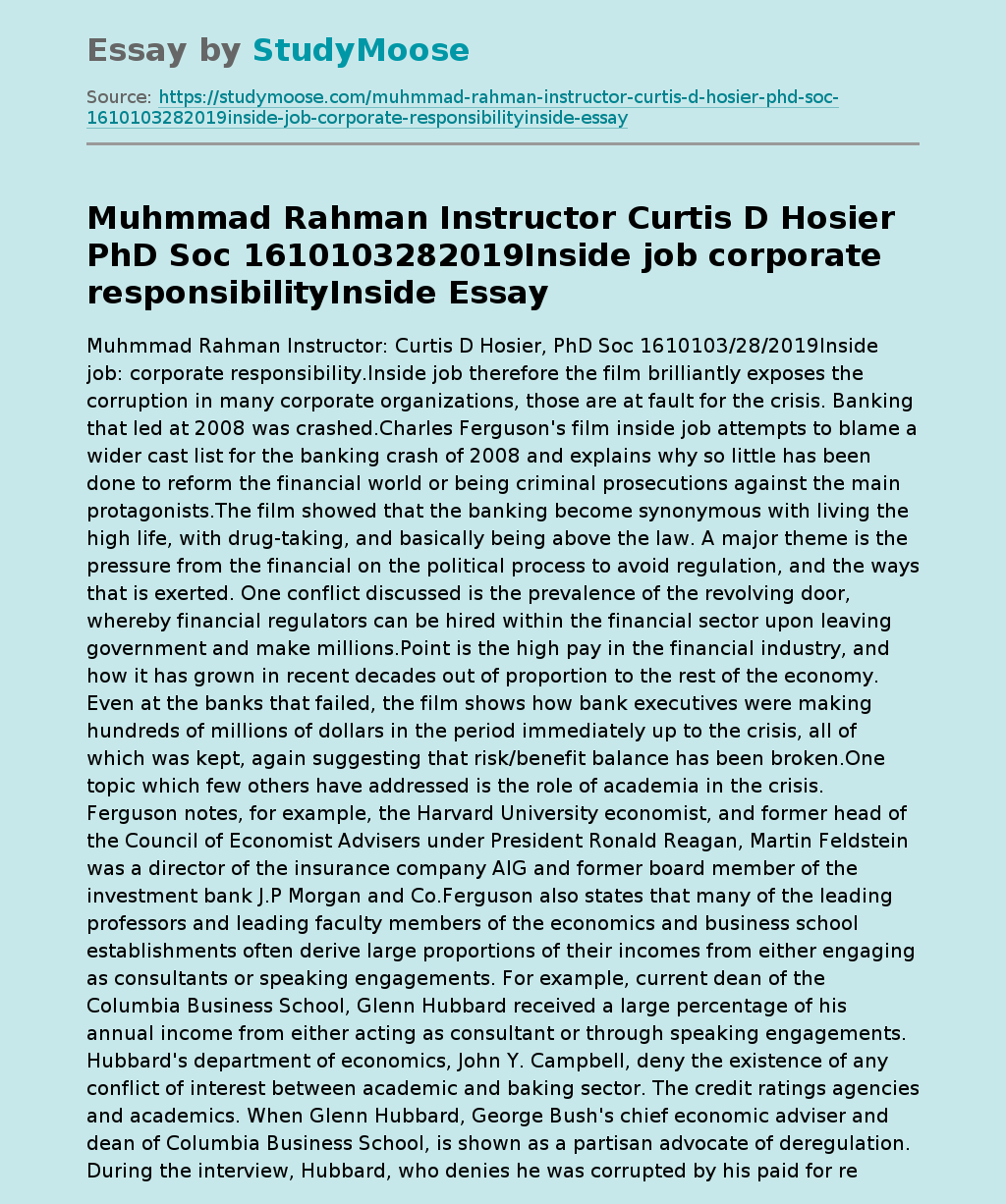