When talking of triangle desire, one needs to know that desires of individuals are rather simple in that it only needs a subject and object. As one’s desires becomes increasingly more complex a mediator appears and the triangle is complete. This is at least what Mr Girard’s theory states. So, Mr Girard’s theory in its essence has three components, the mediator, Mr Holmes in this case, the subject Dr Watson and the object which is the crime. In A Study in Scarlet (1887) Watson has no idea what Mr Holmes’ profession is before considering the flat share.

Don't use plagiarized sources. Get your custom essay on
“ Mr Holmes and Dr Watson’s Relationship ”
Get custom paper
NEW! smart matching with writer

Despite this, Mr Holmes’ appeal intrigues Dr Watson even more when he discovers Mr Holmes’ actual field of work. In Mark Gatiss and Steven Moffat’s interpretation of this century’s old tale, John finds Holmes fascinating upon the first encounter yet does not think twice about join Mr Holmes in his criminal investigation. This specific attribute of Dr Watson creates a red thread through every interpretation of Dr Watson.

The best comparison is that of a child since initially he is curious, then he investigates this strange phenomenon and lastly his dragged willing into the fascinating world of mystery. Here, one sees Mr Holmes, the mediator, being the one dragging Dr Watson, the subject. Additionally, Mr Holmes influences the crimes which needs to be investigated since everything is driven by his personal interest in a certain crime.

In proximity Mr Holmes and Dr Watson is close since they live under the same roof but intellectually rather far from one another.

According to Girard ‘their spheres of possibilities penetrate each other and that us why one can classify their relationship as “internal mediation.” Despite this notion Dr Watson does not hide his admiration for Mr Holmes and his methods of deduction, which is typical of “external mediation.”‘ Dr Watson is perfectly aware that Mr Holmes is not without faults in his personal life, but in his professional life he is spot on. The example below from A Study in Scarlet wonderfully shows both sides of their discussion of the crime:

‘I’m not going to tell you much more of the case, Doctor. You know a conjurer gets no credit when once he has explained his trick and if I show you too much of my method of working, you will come to the conclusion that I am a very ordinary individual after all.” “I shall never do that,” I answered; “you have brought detection as near an exact science as it ever will be brought in this world.” My companion flushed up with pleasure at my words, and the earnest way in which I uttered them. I had already observed that he was as sensitive to flattery on the score of his art as any girl could be of her beauty.’ (Doyle A Study in Scarlet pp. 88-89)

This quotes also shows Dr Watson’s admiration of the detective and how he idolises Mr Holmes when it comes to his occupation. But it also tells that Mr Holmes is an ordinary man with extraordinary abilities.

As far as their Friendship goes it is difficult to place it in either external or internal mediation since it is right in the middle. One may even argue it is the happy medium. But as Mr Girard seems to see these celebrated characters companionship is a case of internal mediation. Moreover, they may challenge even rival each other, at some points even argue, discuss but it is unlikely they will despise one another. On the contrary, their companionship flourish because they have a mutual respect for each other and agree that loving the thrill of the chase is admirable. Even though, Mr Holmes is Dr Watson’s mediator they desire the same thing, namely solving the mystery. In the BBC version, Dr Watson even tries to befriend Mycroft’s assistant Anthea despite her not being part of the crime, he and Holmes a trying to solve (Study in Pink 34:43). This attempt to befriend a lady shows that Dr Watson has more on his mind than simply the crime. The reason why this particular friendship fits excellently into Mr Girard’s theory is because it simply shows the complexity of friendship itself.

On another note, throughout Mr Holmes and Dr Watson’s long career in both the written and visual sphere it is clear that they share a homosocial bond. There may not be any clear evidence on said bond but as far as Polasek is concerned: ‘Through the homoerotic subtext of the series is one of the most explored themes in Sherlock fan fiction.’ (Polasek 2012. pp. 53) In the original novel scholar argue that the living arrangements are not favourable. In BBC’s version, however, this arrangement is played for laughs especially when Mrs Hudson asserts that they are romantically involved. (Study in Pink 14:24) Mrs Hudson’s assumptions may not be true but these famed men do share a strong homosocial bond. Taking this bond into consideration, some argue that these men are far more than merely friends, whether or not this is true depends entirely on how we interpret the material. It may prove a challenge to find any evidence for Mr Holmes and Dr Watson’s relationship being more than just friends or colleagues in the original material. By way of contrast, BBC’s version is in favour of portraying them as more than simply friends. This portrayal is once more evident when they are enjoying dinner in a small local restaurant and are mistaken for lovers. The strangers mistake takes places while the two friends are discussing whether or not arch-enemies are something one can have:

Sherlock: ‘What do real people have, then, in their· “real lives”?’

Sherlock: Yes, well, as I was saying, dull.

John: You don’t have a girlfriend, then.

Sherlock: Girlfriend? No, not really my area.

John: Mm. Oh, right. Do you have a boyfriend? Which is fine, by the way.

John: So, you’ve got no boyfriend, then.

This little chat tells the viewer quite a bit about the characters relations to one another going forward. Plus, its shows that both men are willing to accept the other for who they are and caring for one another is a priority in order for this relation to work. Plus, this chat indicates where they have one another and how their quit comradeship may grow into something beautiful. Mr Lavigne liken Mr Holmes and Dr Watson’s comradeship to that one experiences in ‘buddy cup’ (Lavigne 2012. pp. 17) movies and shows. Above this, he observes that the union these two characters ends up be so close that all one needs to gather to find out what the other knows is their facial expression.

One form of homosocial bond which is ever present in the tales are that of cuckoldry. And, Mrs Kososky Sedgwick remarks that this type is not present in Mr Sherlock and Dr Watson’s comradeship since a lady is needed for such fun to take place. Another way, they maneuverer their relationship around this specific type of homosocial lewdness is by avoiding subordination by taking the piss out of one another. Their ability to laugh at, not only themselves, but each other makes for solid base for a healthy comradeship. Yet, their competitive nature when it comes to crime solving may create some pitfalls for their comradeship. This is especially evident when they discuss the evidence retrieved from Jennifer Wilson’s suitcase:

Watson: Pink. You got all that because you realised that case would be pink?

Sherlock: It had to be pink, obviously.

Sherlock: Because you’re an idiot. No, no, don’t look like practically everyone is.

Their crime solving makes it possible for them to build an actual homosocial bond without anyone else interfering. In this scenario, the crimes themselves, act as a cuckoldry which in its essence enable them to spend all day in each other’s company without anybody questioning what they may be doing.

The escapades of these two beloved men does not have a complete absence of females, for instance there is Mrs Hodson, Watson’s later wife and lastly ‘the woman.’ But the most intriguing of these three leading ladies is Irene Adler because she actually comes in between these men. Watson falls for her, despite having a wife. In A Scandal in Bohemia (1891) readers are introduced to this mystical, manipulative lady Miss Adler or more famously known simply as ‘the Woman.’ Throughout the narrative she manages to outwit Mr Holmes and thus comes out victorious, which demonstrate that she is a worthy adversary of Mr Holmes and thus catches his attention because of her great mind. As far as the friendship of Mr Holmes and Dr Watson is concerned because one needs to ‘preserve one’s virginity when under siege.’ (Atkinson 2009. pp. 40) The virginity referred to in this instance is that of Mr Holmes because he is supposedly both a biological and symbolic virgin. In the newest interpretation, he mentioned that is ‘married to his work,’ (Study in Pink 51:12) his choice to stay pure plays a vital role in how he performs as a detective, yet his purity does not stop him from having an imaginary relationship with Miss Adler.

No one, besides Sir Doyle, knows what the true nature of Mr Holmes and Dr Watson’s relationship really is. Yet through the countless interpretations it has become evident that these two men have built a wonderful friendship. In the age of the internet, theories and speculation have a space to flourish like they have never had before. And, the possible homosexual nature of their relationship will live on in fan faction across the web. Despite, not knowing if Mr Holmes and Dr Watson is romantically involved with one another, there is no doubt that their relationship is complex and especially their homosexual bond adds to this complexity. 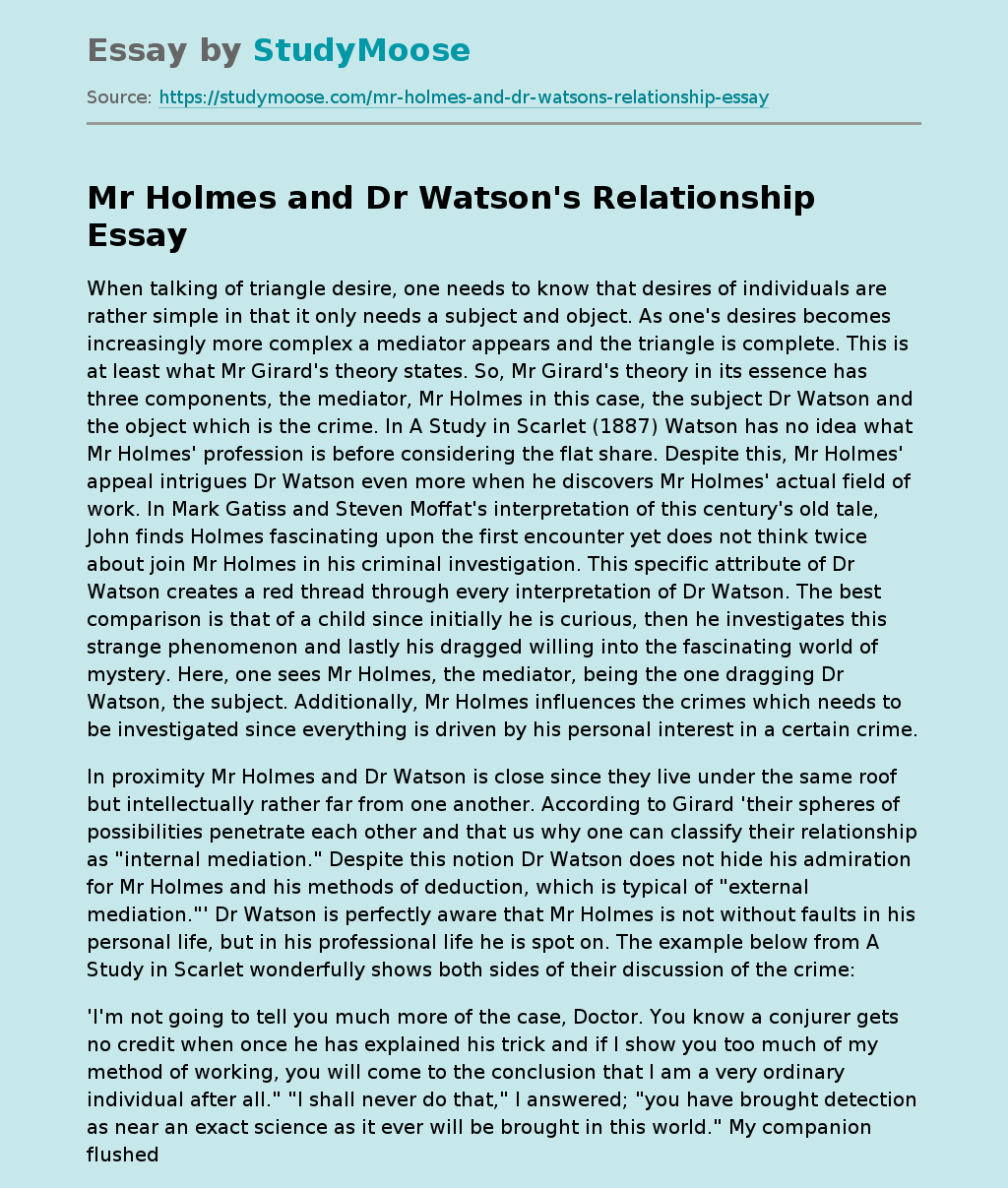