Mock-heroic Poetry The Rape of the Lock

Mock-epic, also known as mock-heroic poetry is a juxtaposition of trivial subject matter and grandeur epic style. From the fundamental point of view, mock-epic is nothing but the most popular neo-classical burlesque used as a double-edged satirical weapon. Batrachomyomachia, an anonymous parody, attributed to Homer, is most probably the earliest example of mock-epic genre. Alexander Pope was the central figure of Augustan Age, for his best mock-heroic poetry The Rape of the Lock, written based on a contemporary scandal. It deals with the journey from an insignificant event of cutting hair lock of a belle, to a Trojan war.

Don't use plagiarized sources. Get your custom essay on
“ Mock-heroic Poetry The Rape of the Lock ”
Get custom paper
NEW! smart matching with writer

Pope’s The Rape of the Lock, published in 1712(revised version in 1714 with five cantos), is like a literary heterogeneous architecture that offers a multi-dimensional flow of phenomena. This poem nurtures the every sphere of emotions. The poem is just to bring out a serious enmity between two Catholic land lord families-the Petres and the Fermors derived from a ‘dire’ offense by the young lord Petre.

He takes revenge by cutting the lock of hair of Arabella Fermor, a lady from Fermor family, as his amourous proposal was strongly shunted aside by the lady. The entire poem is decorated with super-natural characters like sylphs, gnomes and their magical activities. From the beginning, Pope created a sarcastic atmosphere with the luxurious, idle lifestyles of lord families. At last but not the least, this mock-heroic poetry, written in iambic pentameter, also leaves a great literary value with its enriched rhetoric and prosodic features.

The features of a mock-epic would be almost same as the epic but it should be clearly distinguished by its dissimilarity between subject and style.

The features of The Rape of the Lock as a mock-epic, are depicted below:

In this poem, Pope’s subject matter is insignificant but the style is very high like an epic saga. The rape of the lock is not so rich in content to fit with the epic-rhythm.

Pope’s The Rape of the Lock, a tribute to friend Caryll, is a superlative piece of mock-epic that delivers charms at first glance with its inherent intellectual tricks at its fullest, as Pope describes in his own way-“Charms strike the sight, But merit wins the soul” (in “The Rape of the Lock”).

Mock-heroic Poetry The Rape of the Lock. (2016, Aug 09). Retrieved from https://studymoose.com/mock-heroic-poetry-the-rape-of-the-lock-essay 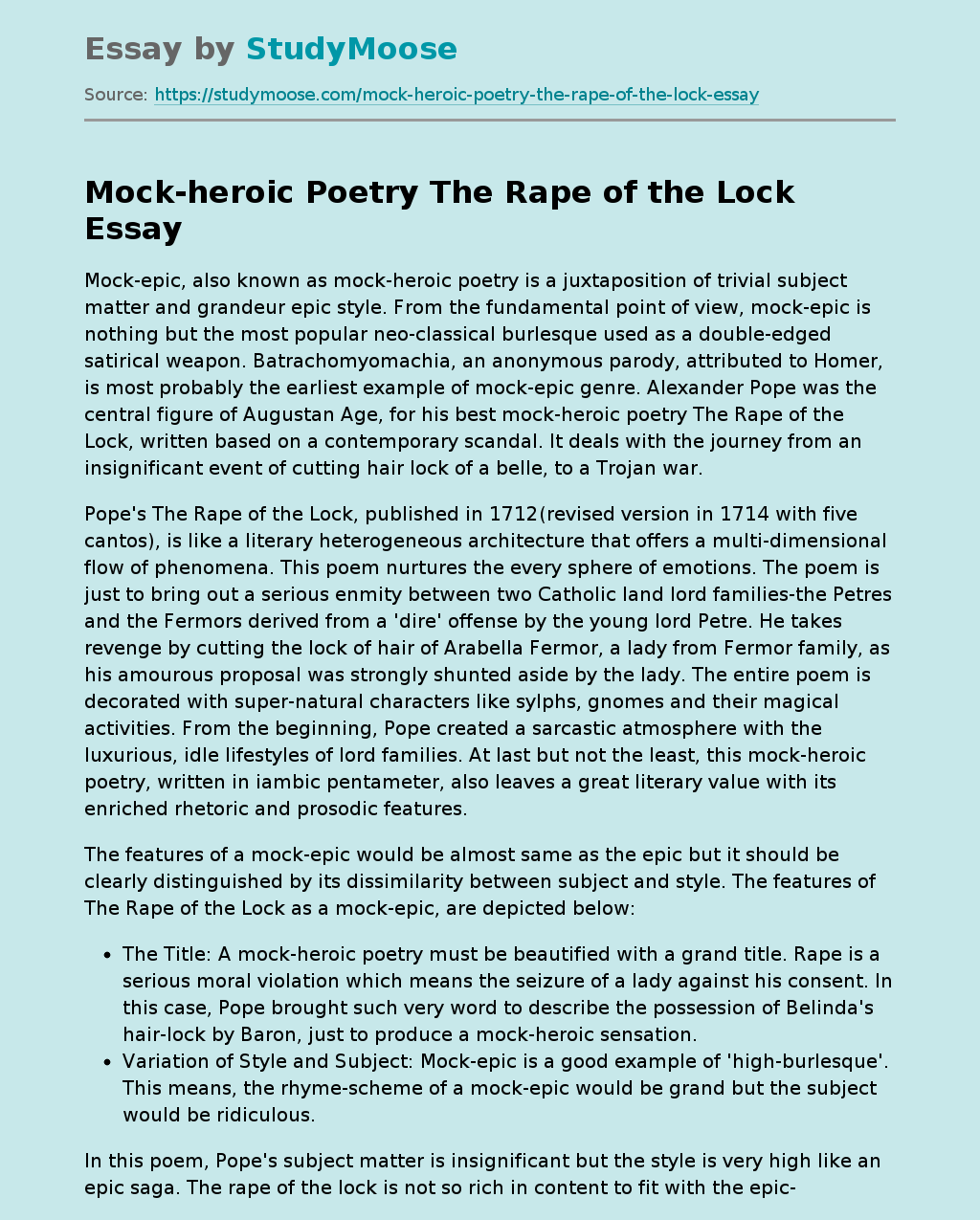