Memento (2001), a film that was written and directed by Christopher Nolan, has captivated the attention of movie and puzzle enthusiasts everywhere. Some may call it a Drama or Mystery, or even a Thriller or a Neo-Noir film, whatever the case is, this film fits most, if not all, of these categories. Memento is a film about a man, Leonard Shelby who lives his life with Anterograde Amnesia which leaves him incapable of making new memories. He spends the time in this film putting pieces of a puzzle together that will hopefully lead him to find the man who raped and killed his wife.

Don't use plagiarized sources.
Get Your Custom Essay on Memento Film Analysis Paper Just from $13,9/Page

Christopher Nolan takes us through a crazy journey that involves twists and turns, Fear and Anxiety and even a feeling of Paranoia that leaves us questioning who we should really trust in the film. This psychological mystery allows us to see the film as neo-noir because of the flawed protagonist which is reflected in the main character, Leonard.

With the disability our main character and narrator has, it might give some viewers a feeling of uneasiness and may even not trust him entirely which gives the feeling of paranoia in not knowing who in the film is telling us the truth and who is lying to us.

The story is told in a confusing way, if one were to not pay attention for a short period of time, it may be certain that you will be lost in the film. One has to truly pay up most attention in order to fully process everything that is going on, one viewing may not even be enough, a second viewing may help us catch things that were previously missed or even hidden in plain sight, but the film keeps us with the anxiety of wanting to know what happens next which allows this film to catch our attention even after one viewing. Memento is a film that can fall under many genres of film, I will however, be focusing on

the genres of Drama, Mystery and Thriller. The film includes many different elements which allow the film to fall under these three main genres. A drama is often described as a film “that relies on the emotional and relational development of realistic characters. ” Most of the emotional development could be seen through the characters of Leonard and Natalie, who seem to develop an intimate relationship. This is in a way hinted to us during a scene where we see Leonard waking up in bed next to Natalie. Drama is also seen when “dramatic themes play a huge role in the plot.

See more: how to write an analysis paper on an article examples

” Leonard is often questioning what the truth is and what isn’t, thanks to his rare case of amnesia he is often seen to be in conflict with himself and those around him. The purpose of a drama is to tell an honest story of human struggles; the struggles that Leonard goes through could be the same that one may go through when faced with the rare case of amnesia. The Mystery genre seems to be thrown at us with the many examples that we are given throughout the entire film. A mystery usually “centers on a person of authority, usually a detective that is trying to solve a mysterious crime.

” The crime that is trying to be solved is the murder of Leonard’s wife, the murder is shrouded with mystery not only because of Leonard’s inability to remember, but also because of the very limited clues that we’re given. This genre could also tie into other genres such as Crime Fiction, Revenge, and Crime Thriller. The biggest element that the mystery genre has is the feeling of “whodunit”. This “whodunit” is usually described as the story that gives the identity of the murderer at the end. Memento also fits under the genre of Thriller which usually revolves around the

anticipation and suspense in a film. They do this in their genres in order to keep the audience wanting more or for that edge of their seat excitement. Christopher Nolan does an excellent job with this genre; the way the film was presented helps this genre so much more. With the story being told to us backwards we want to know why things are happening, often times other films have us wondering what will happen next, but this film has us thinking, what happened before the event that we just saw.

With the many genres presented, it’s no surprise that Memento would have an element of confusion to it. The story itself may be confusing, but I rather want to talk about the characters within the film. Leonard Shelby suffers from a rare case of Anterograde Amnesia, according to the science section of the website HowStuffWorks. com anterograde amnesia means you have difficulty of making new memories and absorbing new information. Leonard Shelby being our main narrator throughout the film, we seem to trust and believe everything he tells us, this is due to the fact that we are so used to watching films that tell us that the narrator is a reliable subject.

Leonard Shelby having this handicap makes us feel some sort of sympathy for him which makes believe he is reliable, but having a condition where you cannot remember how a conversation began once it has ended, leaves us wondering how can we believe this man if he can’t even remember how he got to the point in which he is now.

We watch the film thinking of who is lying to us, who is telling us the truth, what’s going to happen, towards the end we seem to build a trust with our main narrator because we’ve seen the struggle he’s gone through and the situations he’s had to face in order to find the murder who killed his wife.

To our surprise, once we get reach the ending of the film, which in reality is the beginning, we see that Leonard has been lying to us the entire time. Character development in a film is crucial because it allows us to see who we can categorize to be the “good guy” or the “bad guy”, the non-linear narrative presented to us in Memento allowed Christopher Nolan to play with the way he presented his characters and make us believe the people who were truly lying to us. 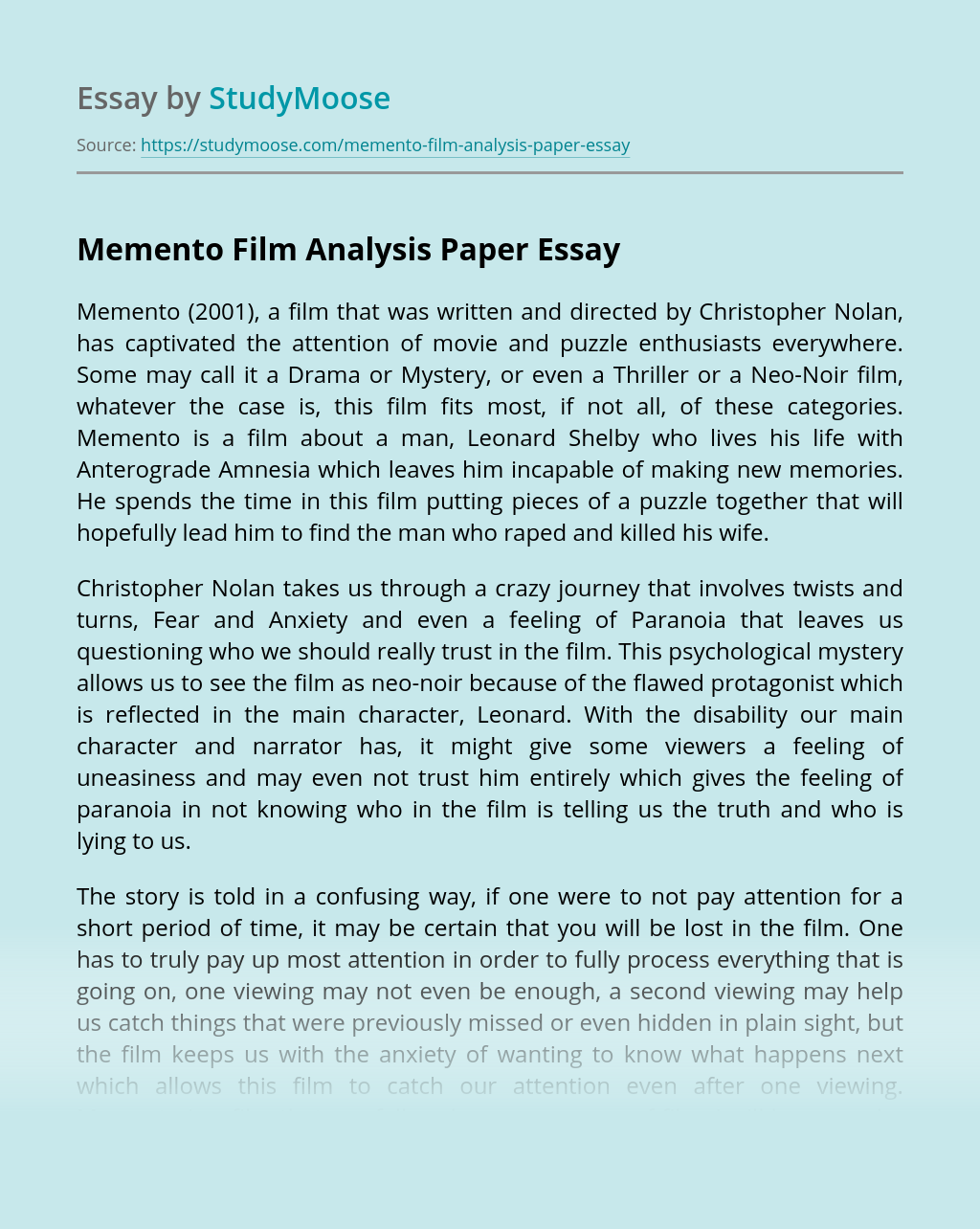