Literacy gives us minorities the ability to read and write. Today, we get most our information through an interwoven system of media technologies. The ability to read many types of media has become an essential skill in the 21st Century. Media literacy is the ability to access, analyze, evaluate, and create media. I came up with this topic because Media literate youth and adults all over America to better understand the complex messages we receive from television, radio, Internet, newspapers, magazines, books, billboards, video games, music, and all other forms of media.

Media can present content that seems and is more or less real, however, it is our duty as the viewers to be able to distinguish, and differentiate between “reflections of reality, and constructions of reality”. The prime targets of the media are young people because they so unwittingly believe everything the media tells them, from “how to talk, how to dress, and how to relate to others”. Media literacy skills are included in the educational standards of every state in language arts, social studies, health, science, and other subjects.

My potential strength is giving my audience various types of important effects of global media literacy such as education ,health related issues, drugs, alcohol, tobacco, body image, obesity, sex distractions , lack of knowledge and all types of sports that does and does not effects our globalization. I researched and found out many researchers have discovered that media literacy is an effective and engaging way to apply critical thinking skills to a wide range of issues.

My main Importance I want my audience to know about media literacy, according to Edward Donnerstein who is a major research interests in mass-media violence, as well as mass media policy. He has published over 240 scientific articles in these general areas and serves on the editorial boards of a number of academic journals in both psychology and communication.

Donnerstein States that in his book ” Media literacy skills can help youth and adults by developing critical thinking skills, Understanding how media messages shape our culture and society ,recognize, bias, spin ,misinformation, lies and also evaluate media messages based on our own experiences, skills, beliefs, and values. ” I learned from Donnerstein that this project with media literacy fit within the existing globalization because media literacy is a delicate issue that has some good and bad effects on everyone in today’s society. For example, Communication has become a major tool to connect if we want to travel to Africa or learn about Australia information is at our fingertips .We can text someone instantly and get a response back from Russia immediately. We can call someone over Skype in India and talk for free on our computer for as long as we want. Not to mention Facebook and Twitter which have become the most popular social networking tools on the world.

My study according to Cole VT 2006, an article on television and obesity talks about how the media has strong influence over public thought because of the universal demand of the media, because of the accessibility of media it becomes more influential to those who watch it and the viewers who believe the ideas and stereotypes portrayed through the media; nevertheless, they become the individuals who become influenced by the media. The media demonstrates the ability to create and influence those who watch television; however, one particular group that the media has targeted is children. Television and internet has allowed for the expansion of knowledge to expand globally, but also has the ability to corrupt the mind of the youth. Cole gives us audience a quote stating”The expansion of knowledge is spreading and so is the waist size of the American youth”.

It has been established that television, internet and social medial allows for children to become educated through these conventional outlets; however children should be limited to a minimal amount of television because there is correlation between excessive television, internet and an increase in BMI, which has been linked towards the causes of obesity in children. Obesity effect children’s who consume a significant am out of television such as erratic behavior, less active in physical activity, deprivation of sleep, mood swings, Increase in laziness, and increase in weight again which consents of obesity. According to Kong JP, in 2010 his Journal of Society for development in new net environment in B&H. “children who watch up to three hours of television on average, watching up to at least 40,000 TV commercial per year and developing a favorite television show or program that retains their attention. Based on the fact these impacts can lead to a significant decline in health and overall performance of children. If these bad habits remain continuance this could lead to an unhealthy life and unhealthy habits, which can ultimately be fatal”.

However, we parents need to set a good example, because they are role models for their child, and the behavior that children have is usually a replica of the parents. Some parents allow for children to be consumed by television, while they gallivant in their own activities instead of spending time with their child. By allowing a child to consistently watch television instead of being active in a physical activity can result in the child becoming lazy. It is important to encourage your child to do other activities outside of watching television, so it’s good not to invest all your time on television and find an outside source for entertainment. For instance, if a child asks to play with their mom or dad and the mom tell their child I do not have time, go watch television. Ultimately, the child will begin to rely on the television as there daily activity. It is imperative as a parent that you find quality time to spend with your child and that quality time should be spent away from the television.

My Methodology of data I collected throughout a quantitative and qualitative research study is that I gain from Elsevier Health Sciences that it is imperative to understand that childhood obesity is at all-time high, and as the years increase so does the sizes of the American children. If children are going to is watching a significant amount of television and internet daily there should be other alternatives and activities provided in place of the television. For instance, for every amount of television or technology being used will result in the same amount of time spent actively engaging in an activity that does not require you to sit in front of the television or , or iPad, Xbox 360 and etc. Also, it is recommended that a maximum of two hours should be spent watching these technologies.

According to the American Academy of Pediatrics (2001), it is recommended in order to help reduce the amount of television and internet being consumed is to not watch television or use technologies while eating meals, remove all televisions from blatant/obvious places in the houses, such as the living room. There should be no television located in the children’s room because children will stay up all night with their eyes fixated at the television or technologies. Also, it’s good to implement days without television and to plan family activities that allow to children engage actively. By limiting the amount of hours spent on television and internet can help reduce the risk of children becoming obese and allow for them to find other activities that can be beneficial to their growth and allow for them to live a healthy life. Children’s greatest exposure to violence comes from television.

TV shows, movies edited for television, and video games expose young children to a level of violence unimaginable just a few years ago. According to Salmon J, Campbell KJ, Crawford DA states in their Journal of Society for development in new net environment in B&H that majority of teenagers and children today know the underlying themes of the media, and know that it is all scripted even the violence, however, the matter of fact is that teenagers can relate so much to the themes in the media that they slowly begin to believe it. Once they get introduced to the characters, they gradually start to consider them real and starts to partipate in bad behavior Cambell states in his journal that “our community in today’s society face many obstacles with our youth and the media that is destroying the foundation of family’s and juvenile delinquency.

For example, social learning theory, strain theory and control theory, just to name a few, are typically postulated for being directly related our media juvenile delinquency. In dealing with all of these effects and how they play a role with delinquency the question still remains as to whether or not higher crime rates in juveniles are significantly increased when media plays a big factor”. The media has the ability to influence social constructed ideas and creating stratification amongst minorities and ethnic groups allowing for the uses of the television and social media outlets to become addicting. As a result of this addiction it enable individuals such as children to become or remain fixated on these primitive idea of life. And because of this strong addiction towards being entertained it is important to stay tuned to the media and the most up to date gossip or the newest television show.

Unfortunately, while the media are communicating a plethora of sexual messages, many of those messages would not be considered accurate or healthy. For example, while the amount of sexual content on TV has nearly doubled since 1997 very few teen television shows mention any of the responsibilities or risks (e.g., using contraception, pregnancy, STIs) associated with sex and almost none of the shows with sexual content include precaution, prevention, or negative outcomes as the primary theme”. 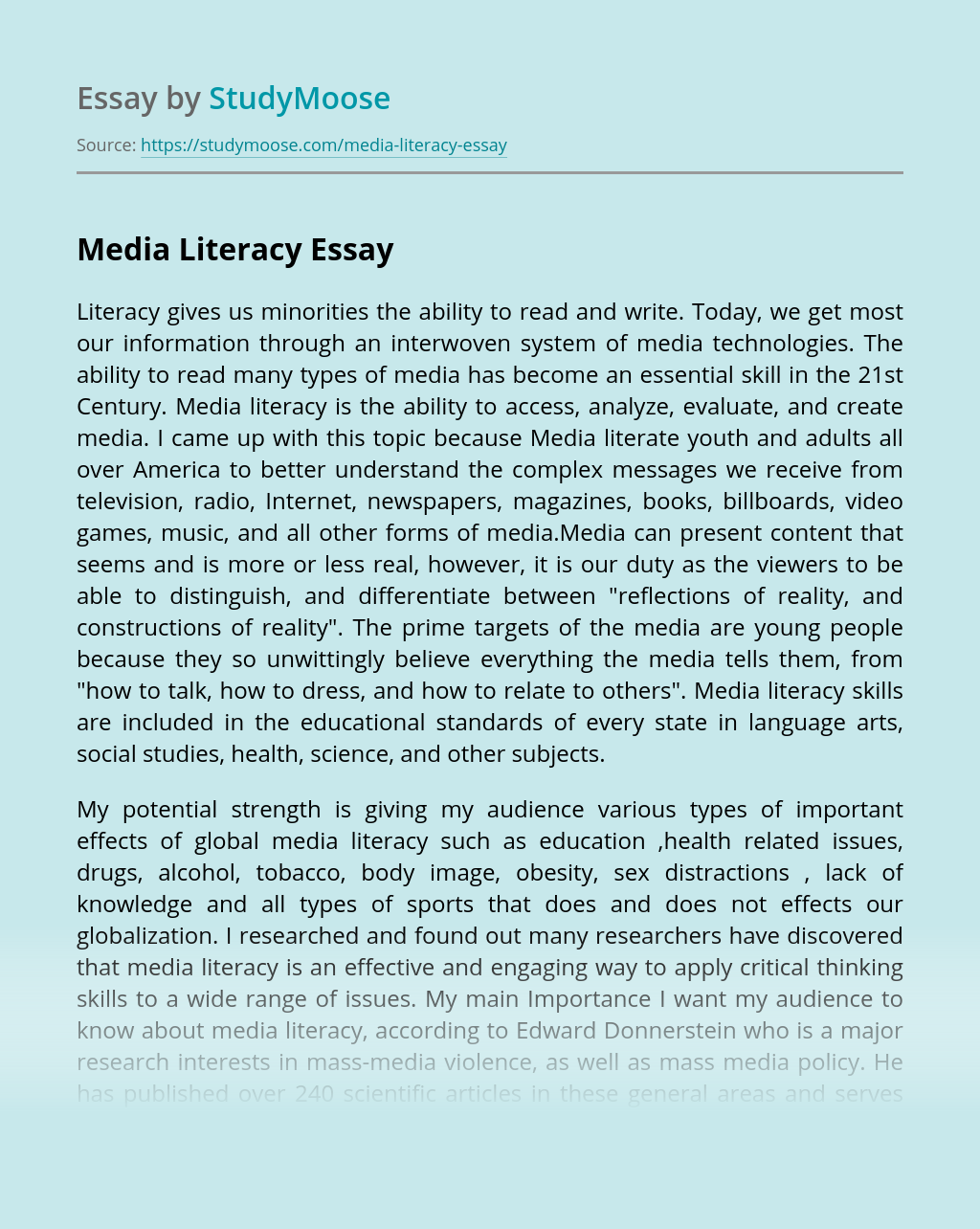