McDonald’s doing global business and their restaurants around the world. By 2003, the company had 30,000 restaurants in 121 countries.

In the late 1990s, McDonald’s entered in India. Although India is poor nation, there are 150 to 200 million prosperous middle class population was attracted McDonald’s. However, there are unique challenges for McDonald’s. For thousands of years, India’s Hindu culture has revered the cow and do not eat the meat of the scared cow, also there are some 140 million Muslims in India, and Muslims don’t eat pork.

Don't use plagiarized sources. Get your custom essay on
“ McDonald’s and Hindu Culture ”
Get custom paper
NEW! smart matching with writer

To respect and adapt Indian culture, McDonald’s created an Indian version of burgers which are made from mutton and chicken. All foods are segregated vegetarian and nonvegetarian, due to many Hindus are vegetarians.

In 2001, three Indian businessmen living in Seattle are all vegetarians and two who were Hindus, they sued McDonald’s for “fraudulently concealing the existence of beef in McDonald’s French fries! Through some argument between Mac and Indian people, finally Mac admitted that it used a “minuscule” amount of beef extract in the oil.

McDonald’s settled the suit for $10 million and issued an apology.

However, news blaze abroad, Hindu nationalists onto the streets in Delhi, where they vandalized one McDonald’s restaurant, causing $45,000 of damage; shouted slogans outside of another; picketed the company’s headquarters; and called on India’s prime minister to close McDonald’s 27 stores in the country.

* The main problem of the case is religion issue. Hindu culture has very strong belief because it has remained unbroken and largely unchanged for at least five thousand years. (http://www.atributetohinduism.com/Hindu_Culture.htm#Religion) Used the oil that contained beef extract is very serious matter for Hindus.

* The case also involves the Mores of norm. Mores are norms that are seen as central to the functioning of a society and to its social life. (Charles W.L. Hill, 2005) There are many differences between cultures as to what is perceived as mores. In America, eat beef is widely accepted, but for Hindus that violate Divine Mother.

* There is different culture between two countries. U.S is more individualism society against Hindu is more collectivism, so they walk together onto the street.

* McDonald’s should not give inconstant argument that oil contained beef extract. This will make people un-trust of the company.

With above problems analysis, the company should have some solution. Firstly the company must understand how differences in culture affect the practice of the business. McDonald’s knows Hindu do not eat beef and yet they still put beef extract in the oil, the reason may the company didn’t understand the Hindu culture clearly. Furthermore, the company can employ the local citizens to help them do business in particular culture. These factors also give other foreign fast food and retail stores a lesson when they first time entrance India.

Actually McDonald’s can avoid Hindu nationalists paraded onto street and damage of the restaurant by block the news, because the company has settled the suit for $10 million, they can asked the court to block the news.

For my opinion, McDonald’s not necessary go in very localizing taste. As McDonald’s say nowadays young generation enjoyed the “American” experience, so this is an advantage of McDonald’s doing American style but McDonald’s must be on continual guard against the particular culture. 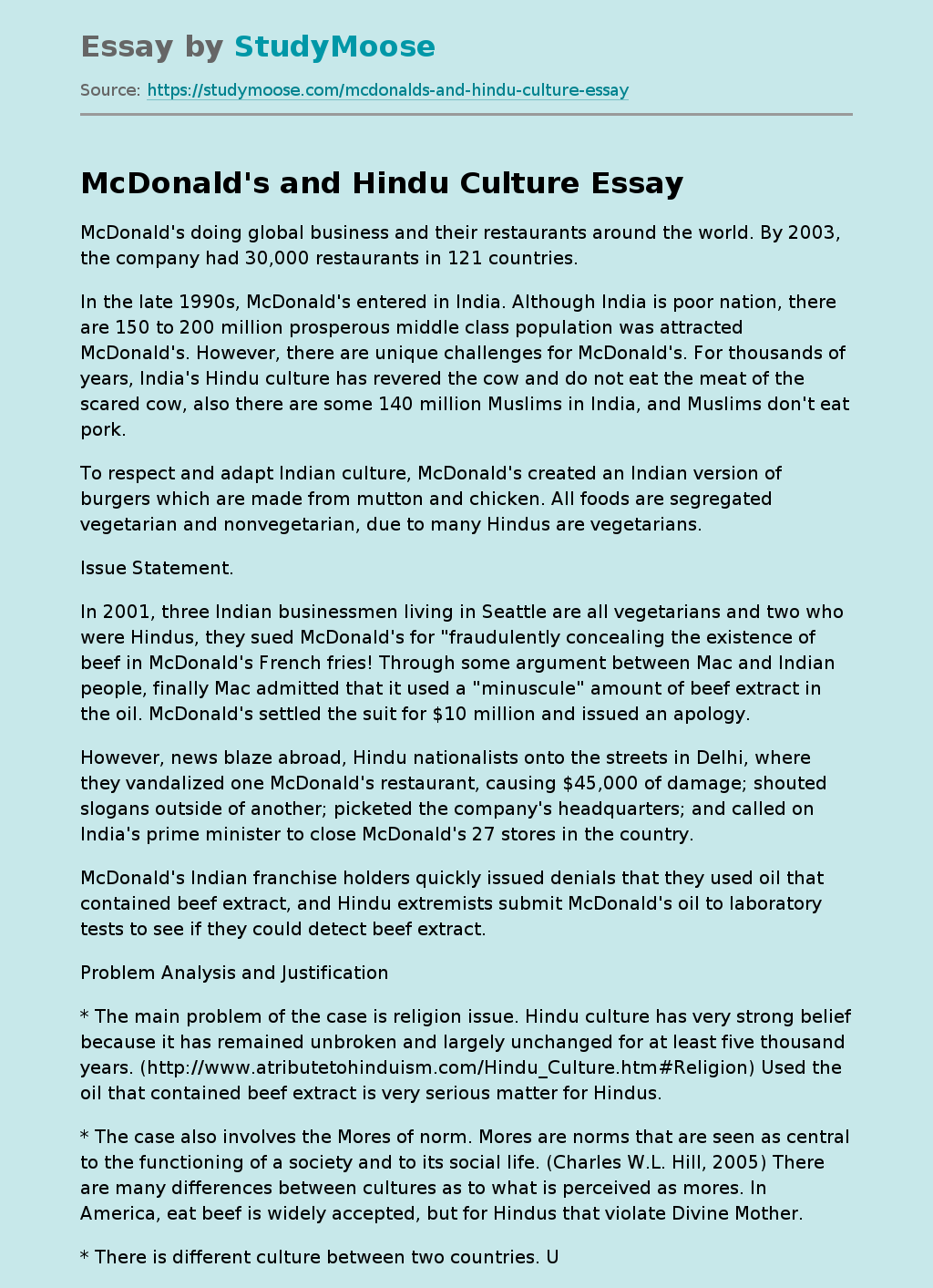