The Hindu month of Ashad (July-August)

The full moon day in the Hindu month of Ashad (July-August) is observed as the auspicious day of Guru Purnima, a day sacred to the memory of the great sage Vyasa. Guru Purnima (IAST: Guru Pur?ima, sanskrit: is a festival traditionally celebrated by Hindus and Buddhists. On this day, disciples offer puja (worship) or pay respect to their Guru (Spiritual Guide). It falls on the day of full moon, Purnima, in the month of Ashadh (June–July) of the Shaka Samvat, Indian national calendar and Hindu calendar.

Don't use plagiarized sources. Get your custom essay on
“ The Hindu month of Ashad (July-August) ”
Get custom paper
NEW! smart matching with writer

Traditionally the festival is celebrated by Buddhists in the honor the lord Buddha who gave His first sermon on this day at Sarnath, Uttar Pradesh, India. While Hindus celebrate it in the honour of the great sage Vyasa, who is seen one of the greatest gurus in ancient Hindu traditions, and a symbol of Guru-shishya parampara, the Guru disciple tradition. Vyasa was not only believed to be been born on this day, but that is not true and also started writing the Brahma Sutras on ashadha sudha padyami and ends on this day, hence their recitations as a dedication to him, are organised on this day, which is also known as Vyasa Purnima.

The festival is common to all spiritual traditions in Hinduism, where it is dedicated to the expression of gratitude towards the teacher by his/her disciple. Hindu ascetics and wandering monks (sanyasis), observe this day by offering puja to the Guru, during the Chaturmas , a four month period during the rainy season, when they choose seclusion, and halt at one selected place; some also give discourses to the local public.

Students of the Indian classical music, which also follows the Guru shishya parampara, celebrate this festival, around the world.

The Hindu month of Ashad (July-August). (2020, Jun 02). Retrieved from https://studymoose.com/hindu-month-ashad-july-august-new-essay 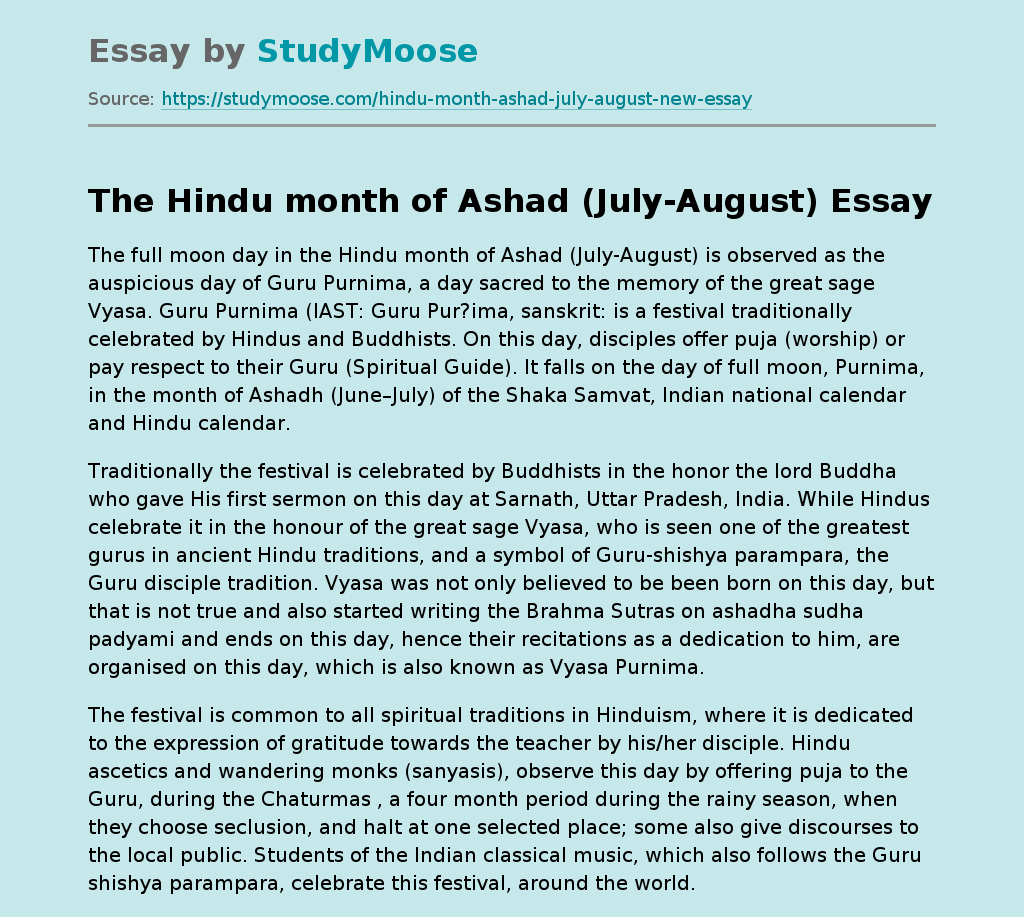