Illegal solid waste disposal on Willies Street in Bedford Town is being taking place. This garbage along the roadside is the root cause of creating several problems regarding people’s health and in maintaining the road for an undisturbed traffic. It’s been over a year that people commit the outrageous crime of throwing garbage along the road side of Willies Street and there is no action being taken against it by the local government which is affecting the smooth flow of traffic and people’s health.

Bedford being the rural area is being neglected by the government and local district to be the cause of such problems. People here have less awareness how this garbage can cause several health issues and pollution. May be they simply ignore the reality and adopt the shortcut of throwing the garbage on the road following others doing the same and making it a rotten heap or we could call their own made dump station instead of throwing it in the dump station which is far from their residence.

How outrageously ignorant one could be? There are no proper disposal methods introduced to the villagers neither any proper dump station, if there is any, they burn all the garbage and cause air pollution which is also dangerous and unhealthy for people.

Moreover, government have limited budget to spend over the cleanliness of the roads along with clearing off the garbage. The terrible affects of the above mentioned problem are not only visual irritation, unbearable stench and hindrance in traffic but also potential health threats, increase in population of pests and intensifying pollution.

The very presence of the garbage on Willies street encourages their continued use by the public. They throw the garbage bags right from their vehicles which lie there and have formed an ugly stinky heap which must be routinely cleaned up to keep the road open for traffic. But this extra work increases the costs of county road maintenance and thus ignored most of the time. Moreover, the dump causes a terrible nauseating stench when it rains. The rain water mixed with the filthy garbage is becoming contaminated by leachates from a large uncontrolled waste heap. This is further increasing population of pests such as rats and insects which has resulted into malaria, dengue and diarrhea in the village. A kid died a week ago from malaria that lived on the Willies road.

An alley or a street is not a place to dispose of human remains. Is this what education teaches us? This illegal disposal of waste on Willies street is causing serious public health and environmental threat. The City officials should immediately take the initiative in rectifying all these drawbacks so that the garbage disposal on Willies street and in Bedford could be operated smoothly and systematically. They should provide for the waste disposal; like an officially permitted site or huge bins on the roads. Moreover, there should be legislation on the enforcement of the prohibition of road side dumping and a law should be passed to the Board of County Commissioners to gather evidence and offer rewards for evidence leading to the capture of person illegally dumping trash. and the amount of reward should be taken from the violators in the form of fine. In addition, it would be a good step if solid waste management district could start a tax from public for the maintenance disposal of waste. On the contrary, local district has arranged a number of bins alongside the roads with a few miles distance for the convenience of public to dispose off their garbage bags which are removed by the solid waste management every day and successfully preventing to let it become a rotten stinky heap.

For that reason, I request the local government, environmental groups and public through this letter to acknowledge the depressing dilemma of Willies Street and take immediate initiative to overcome the harm of the above mentioned problem. The public should keep their city clean like they keep their homes tidy and use bins to dispose the waste instead of throwing it on the road and causing hindrance in the flow of traffic as well as health issues for the rest of the inhabitants just like you. The government should plan to arrange and implement the three-package-solid waste management system for Bedford, where the agency hired to undertake that system will collect waste from door-to-door, segregate it and haul it to the dumping yard on the outskirts of the Bedford.

They should also arrange banners or boards at places to alert people not to throw garbage here and fine the one who violates the rules. The environmental groups on the other hand, are requested to spread awareness about this garbage causing air and water pollution and endangering the health of the people of Bedford through different means like television radio or newspaper. They should further encourage the people not to throw the garbage on road to help prevent diseases neither burn it which is also dangerous and causes air pollution. Therefore, with just a little effort by all of us we can successfully overcome this illegal solid waste disposal on Willies Street in Bedford, the stench and ugliness of which is causing nuisance for the public passing from the road as well as the beauty of Bedford for the tourists. If some urgent steps are not taken, there is a fear of a disease epidemic breaking out in Bedford. 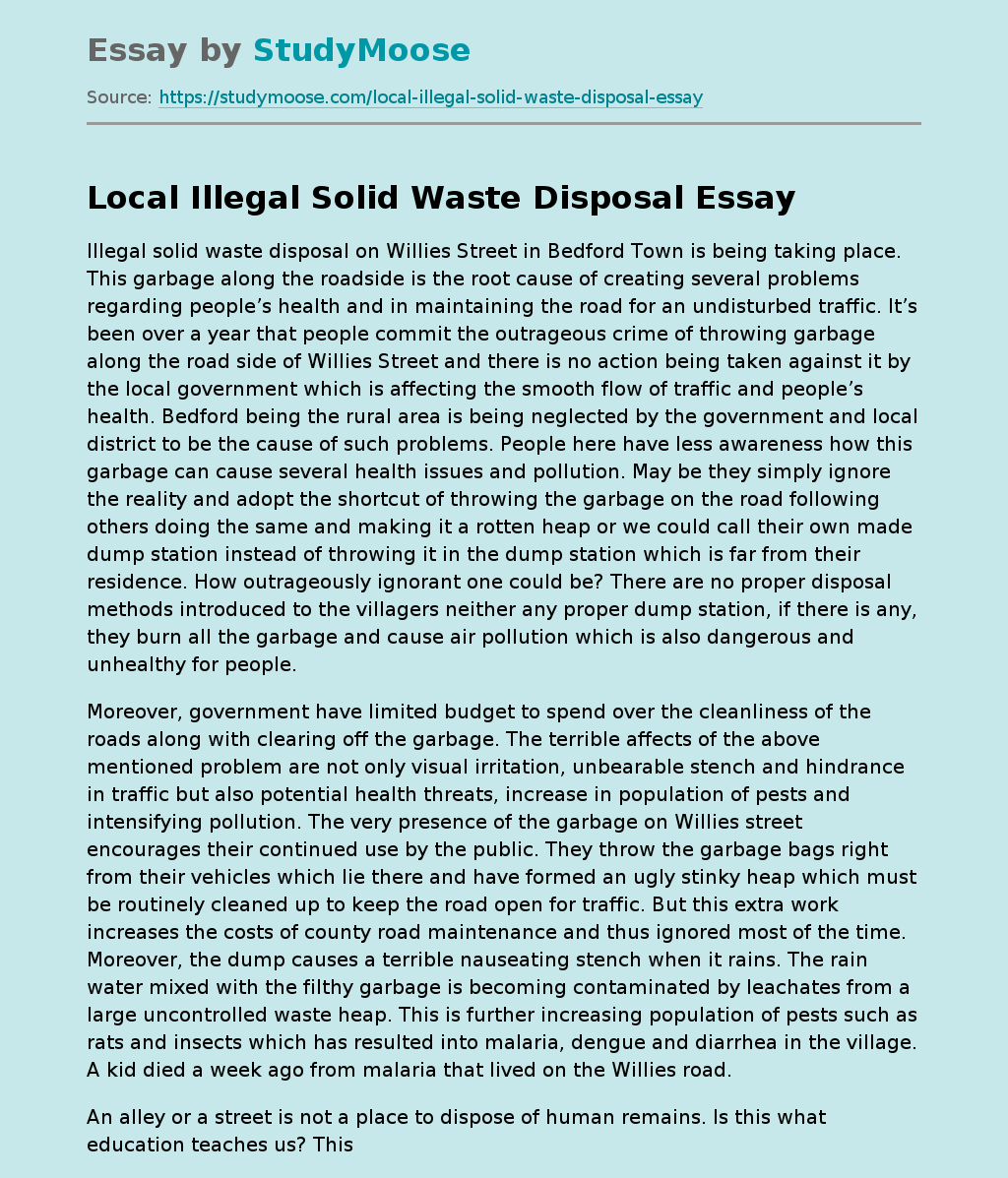