?Literary Analysis - A Raisin in the Sun

In the play, A Raisin in the Sun, by Lorraine Hansberry, the Younger’s are a poverty stricken, African American, extended family of five living in a small apartment in Chicago during the 1950’s. The mother, Lena receives a life insurance check for her deceased husband for ten thousand dollars and wants to use a portion of it to create a better life for her family and buy a home. The play covers the different ideas that each family member has in regards to how the money should be spent and the hardships that develop from those ideas.

The three Younger women, Lena a strong willed older woman with traditional values, Ruth a middle aged hard working woman, and Beneatha a young, egotistical college student, all have unique characteristics which have been formed by the different time periods which they have lived in. Lena Younger, (Mama) is a strong, religious woman whose generation “was worried about not getting lynched and getting to the north…and still having dignity too” (1177) has recently became the head of the Younger family due to the death of her husband.

Her dream is to purchase a home for her family with the $10,000 she is receiving from her husband’s life insurance. Mama “come from five generations of people who was slaves and share-croppers (1204) that taught her to take pride in herself and her family. She was raised in a generation where the men made the decisions for his family and the wife supported whatever that decision was.

Shasta Gaughen indicates that it wasn’t until the late 1950’s and early 1960’s that women started leaving the home and taking on roles other than just a homemaker. Mama grew up where religion was the backbone of the family, youth respected their elders and the power of the dollar did not consume your life, “Once upon a time freedom use to be life – now it’s money” (1177) She wants her son to step up and take over the head of household role, but his obsession with money and opening a liquor store gets in the way of him doing so. Mama feels the generation gap between herself and her children “don’t let us understand each other” (1168) and continues to cause conflict for the family throughout the play.

She struggles with her children’s obsession of money and questions the type of adults they are becoming. The one soft side of Mama is her grandson Travis. When Ruth is trying to punish Travis, Mama steps in and makes excuses for his actions which creates tension between Mama and Ruth. Ruth Younger, Mama’s daughter-in-law, is a hard working, tired woman who believes in traditional values that are similar to that of Mama’s. They both share the dream of purchasing a home and making a better life for the family. The stress of living in poverty has worn her down over the years and because of this she makes rash decisions that she otherwise would never do. This is made evident when she contemplates having an abortion rather than bringing another financial burden into their lives. Her husband’s obsession with monetary things is causing conflict in their marriage and she does her best to convey this to him “Remember how we used to talk…about the way we were going to live…well it’s all starting to slip away from us” (1183).

Beneatha Younger, Mama’s daughter, is a young egotistical college student who is youthful and determined to become a doctor so she can make a difference in the world. She is the most educated of the women and comes from a completely different generation than the other two women. With her generation we begin to see women fighting for equal rights. On December 1, 1955, Rosa Parks refuses to give up her seat to a white bus rider which was a custom in the south. When she is arrested the black community boycotts the buses for a year which inspires blacks and females elsewhere (A&E Networks). Beneatha is struggling to find her own identity in these changing times and is dating two men with different backgrounds hoping to find herself. The more education she receives, the harder it is for her to relate to her family and we begin to see the selfish and egotistical side to her. She puts herself first and spends money on careless items and thinks she is better that the other members of her family.

The main social aspect we see in this play is racial discrimination. The civil rights movement during the 1950s and 1960s resulted in new laws that reversed more than 100 years of racial segregation. These began to put an end to inferior education, better housing and public accommodations, equality for not only African Americans, but also women and other races that were discriminated against (Mikula and Mabunda). Mama purchases a home in an all-white neighborhood because it is cheaper and better quality then what she would receive an African American neighborhood. Mama is thinking of her families quality of life and not how her family is going to affect the neighborhood. They receive a visit from a representative of the neighborhood who offers to  buy them out because their family just won’t fit in well with the residents.

Walter refuses this offer, but after losing the money begins to re-think it and contacts Mr. Linder again. The family members believe that Walter is going to take the offer and that they will never be out of their poverty stricken surroundings, but in the end he does not accept it and proves “we come from people who had a lot of pride… we are very proud people (1206)” and that sticking by your family and not conforming to other’s beliefs make them stronger not only as individuals, but most importantly as a family. Upon reading this entire play, it was easy for me to compare the Younger’s situation to my own as a child. Growing up, I lived with my brother and my mother. My father had a son that died of Leukemia and after that lost all desire to live and became a severe alcoholic. My parents divorced when I was 5 and my father did not give us any support. The next time I was to see him, I would be in my late 20’s, making amends with him on his death bed.

My mom worked at a distribution warehouse for 20 years, which was very hard physical labor. We always had a roof over our heads and a hot meal, but I now know that had our Church not helped us there would have been times were we would not have had heat or electricity. In today’s society, people expect handouts from the government. I am proud to say my mom didn’t rely on monthly handouts and words cannot express how much respect I have for her. My mother worked for very little and towards the end of her employment people were starting out at what she was making after working there for 20 years. This situation taught me how important family is and also the value of a dollar.

I have three boys of my own and even though we are able to give them so much more than I had growing up, I am proud to say they have purchased their own vehicles and had steady jobs throughout school while playing sports and maintaining good grades. I feel the values our youth of today will gain from these experiences will only help their future endeavors and those that have everything given to them create problems in our society as adults. Just like the Younger’s, I learned that as family, you stick together and overcome what problems there may be. The value of the love of your family will always be worth more than anything of monetary value.

?Literary Analysis - A Raisin in the Sun. (2016, Sep 15). Retrieved from http://studymoose.com/literary-analysis-a-raisin-in-the-sun-essay 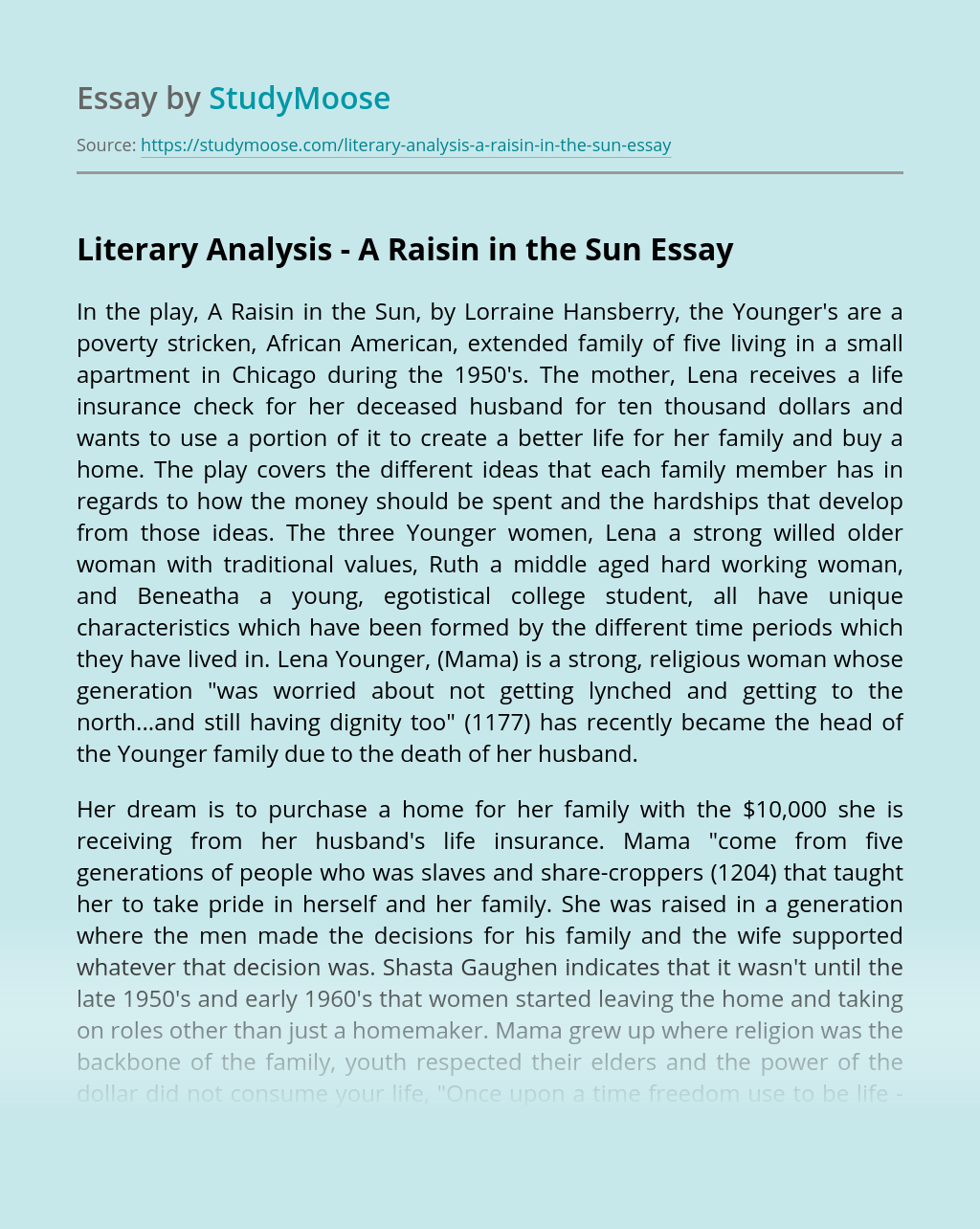 Don’t waste time
Get a verified expert to help you with ?Literary Analysis – A Raisin in the Sun
Hire verified expert
$35.80 for a 2-page paper
Stay Safe, Stay Original