Don't use plagiarized sources. Get your custom essay on
“ Life in Madinah of Prophet Muhammad (P.B.U.H) ”
Get custom paper
NEW! smart matching with writer

He life of the Holy Prophet, peace be on him, was a life of grand success.

In his high moral qualities, his spiritual power, his high resolve, the excellence and perfection of his teaching, his perfect example and the acceptance of his prayers, in short, in every aspect of his life, he exhibited such bright signs that even a person of low intelligence, provided he is not inspired by unreasonable rancour and enmity, is forced to confess that he was a perfect example of the manifestation of Divine qualities and was a perfect man.

. Prophet Mohammad PBUH was a great model for all the humanity.

The Mosque of the Prophet

The first significant event after the migration of Prophet Muhammad (P.B.U.H) was the construction of the mosque of the Prophet. It not only acted as a spiritual centre for worship, but also the political and military headquarters for the new state. It soon developed into an institute of learning where discussions and seminars were held.

A social institution where Muslims learnt and practiced discipline, unity and brotherhood.

The land on which the mosque was build was bought from two orphan brothers. The Holy Prophet (P.B.U.H) and many other prophets themselves worked hard to construct the mosque. This mosque was known as “Mosque of the Prophet” or Masjid-e-Nabawi. To this Quran says in Surah-At- Tawbah: “—, a mosque founded on righteousness from the first day is more worthy for you to stand in. Within it are men who love to purify themselves; and Allah loves those who purify themselves.” (9:108) Walls of the mosque were made of unbaked bricks.

The roof was of mud and date palm leaves and the trunks of date palm trees were used for pillars. A large platform with a thatched roof, was built in one of the corners of the mosque. This was known as Suffah.

In order to call believers of Islam to mosques, the system of calling Azan was introduced. Hazrat Bilal (R.A) was appointed as the Muezzin.

Arrangements for the Inhabitants of Madinah

People of Madinah belonged to two categories; Ansars (Madinites) and Muhajirin (Makkans). Even the richest emigrants were now poor as they had left their belongings in Makkah during the hijrat.

The people who belonged to Madinah promised to help Muhajirs. The Holy Prophet (PBUH) established brotherhood between these two groups of Muslims. The Ansars happily agreed to help the Muhajirs and they took them to their homes, took care of them and shared all of their possessions with them. The Holy Quran mentions this in these words: “Those who and adopted exile, and fought for the faith, with their property and their persons, in the cause of Allah, as well as those who gave (them) asylum and aid, these are (all) friends and protectors, one of another.” (8:72)

The emigrants and their hosts were united into a bond of brotherhood, which proved, in practice, to be stronger than real brotherhood. Even the enmity between two tribes of Madinah, Aus and Khazraj was forgotten, as mentioned in the Holy Quran: “… And remember with gratitude Allah’s favour on you; for ye were enemies and He joined your hearts in love, so that by His grace, ye became brethren…. (3:103) Treaty with the Jews: (Charter of Madinah)

There were three main tribes of Jews: Banu Qainuqa, Banu Nazi and Banu Quraiza, settled in the suburbs of Madinah in their own strong fortresses. The Holy Prophet (PBUH) realised that the foundation of Islam would be very weak unless it was based upon the support of all the people living in Madinah. The situation call for a strong measure of co-ordination and adjustment, particularly as the Muslims were seriously threatened by the Quraish. Therefore, as soon as the Holy Prophet (PBUH) was settled in Madinah, he called together the Muslims and the Jewish tribes for consultation.

Life in Madinah of Prophet Muhammad (P.B.U.H). (2016, May 31). Retrieved from https://studymoose.com/life-in-madinah-of-prophet-muhammad-p-b-u-h-essay 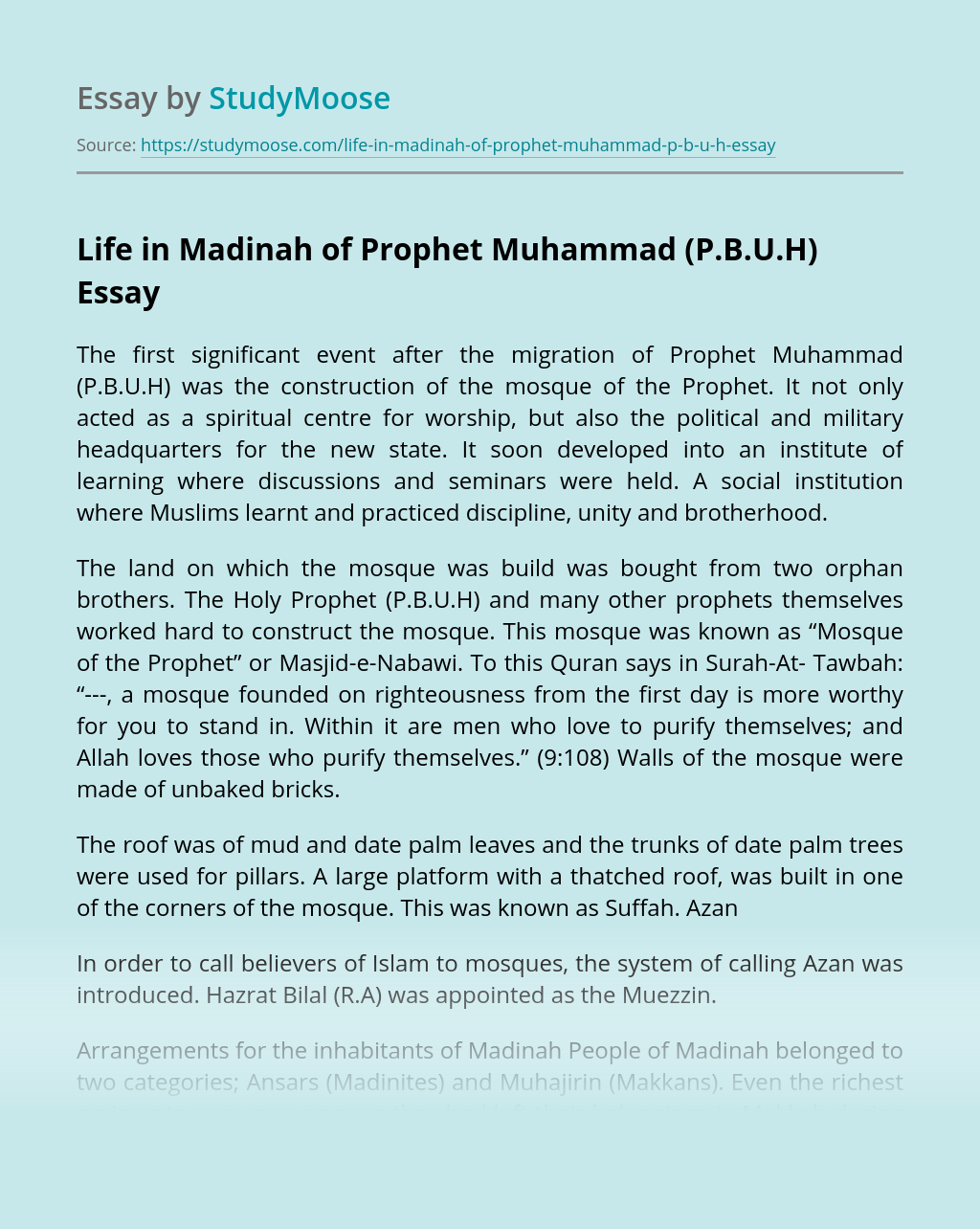