On Good Friday in 1963, 53 blacks, led by Reverend Martin Luther King, Jr., marched into downtown Birmingham, Alabama, to protest the existing segregation laws. All were arrested. This caused the clergymen of this Southern town to compose a letter appealing to the black population to stop their demonstrations. In response to their letter, King wrote back in what would be titled “Letter From A Birmingham Jail”. Especially prevalent in the letter are Aristotle’s appeals, which include logos, ethos and pathos. The concluding section of the document is a well rounded, and demonstrates all of the appeals.

Don't use plagiarized sources. Get your custom essay on
“ “Letter From A Birmingham Jail” – Passage Analysis ”
Get custom paper
NEW! smart matching with writer

Rhetorical techniques and literary devices serve to further strengthen King’s argument and create a convincing argument that he is right in both his mission and his methods.

King immediately appeals to logos, or logic, when he states, “It is true that the police have exercised a degree of discipline in handing the demonstrators. In this sense they have conducted themselves rather “nonviolently” in pubic.

But for what purpose? To preserve the evil system of segregation”. The answer he gives to his question is correct, and this is even clearer in retrospect. By exposing the logical fallacies of the opposing argument, he weakens the clergymen’s argument while at the same time strengthening his own.

In order to back up his point of view and turn himself into an authority for the audience, King uses ethos. Using repetition, he writes, “Before the pilgrims landed at Plymouth, we were here. Before the pen of Jefferson etched the majestic words of the Declaration of Independence across the pages of history, we were here”.

Here he identifies himself as part of a group of people who have been in America just as long, and at the same time stresses the repeated nature of the problem. His ancestors suffered low wages, injustice, humiliation, and countless atrocities under the rule of the white man.

By writing about such landmark events as the landing at Plymouth, or the signing of the Declaration of Independence, King reveals a new time perspective. He uses history, and the pillars set by the founding fathers of the United States as a means of validating his reputation. “We will win our freedom because the sacred heritage of our nation and the eternal will of God are embodied in our echoing demands,” he writes in an undeniably confident, yet at the same time impatient, tone. In alluding to God he is relating to the clergy people by showing that he is a pious person who is genuinely frustrated.

King also uses contrast (when the ideas in the second clause is the opposite of the first) as a rhetorical strategy. This creates a logical argument (an appeal to logos) that simplifies some of his main points. Chiasmus, a more specific kind of contrast, is when the sentence structure itself is different from the first clause to the second. On the topic of the “degree of discipline” the police used to handle the demonstrators, he writes, “I have tried to make clear that it is wrong to use immoral means to attain moral ends. But now I must affirm that it is just as wrong, or perhaps even more so, to use moral means to preserve immoral ends”. The use of logos in this instance goes even further to strengthen his argument because it is inherently true.

Perhaps the most obvious appeal in King’s letter is the appeal to pathos, or the appeal to emotions. Through personalizing his details, he brings the argument to a basic level in which he challenges the clergymen’s’ ideals. “I doubt that you would have so warmly commended the police force if you had seen its dogs sinking their teeth into unarmed, nonviolent Negroes,” he writes using imagery and graphic details to paint a sickening picture. “I doubt that you would so quickly commend the policemen if .you were to observe their ugly and inhumane treatment of Negroes here in the city jail; if you were to watch them push and curse old Negro women and young Negro girls; if you were to see them slap and kick old Negro men and young boys…”. By using pronouns he shows the perverting effect that it actually has. The use of children as an example always helps in the emotional aspect of the argument.

King utilizes the device known a rhetorical question (a question that has no answer) in order to challenge the emotional integrity of those who oppose him. “What can one do when he is alone in a narrow jail cell, other than write long letters, think long thoughts and pray long prayers?”. By explaining his own agony and impatience, he is at the same time giving a description of the frustration of black people in general, and with the repetition and emphasis of the word “long”, the duration of the suffering is pounded into the reader’s head.

“Letter From A Birmingham Jail” is a widely read text, but at the same time is a great example of major rhetorical elements. King’s masterful citations of famous historical figures create an outstanding appeal to ethos, and build up his authority. His emotional imagery brings out pathos and emotion. His legitimate, logical arguments buffer his argument even more. Through these appeals, and the literary devices used to demonstrate them, one cannot deny that the argument found in “Letter From a Birmingham Jail” does more than just refute what the clergymen wrote, in that it truly convinces almost every audience. 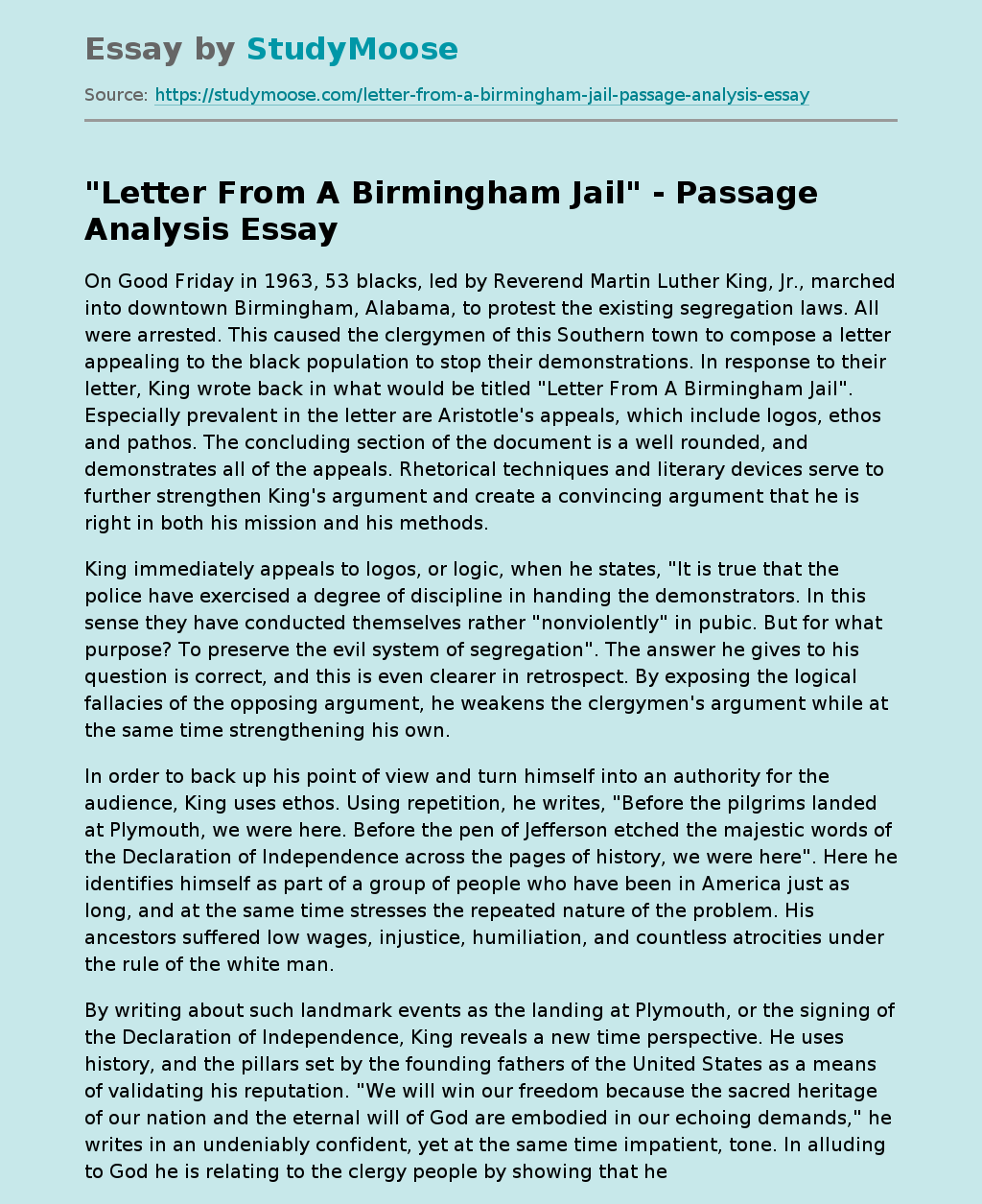