A tragic hero is a man of noble stature, not just any ordinary man, but a man with outstanding qualities and greatness about him. This nobleman will also have a serious tragic flaw which leads to his disastrous downfall. In Shakespeare’s play, Julius Caesar, two characters come to mind who may fit this definition – Julius Caesar and Marcus Brutus. Julius Caesar is a military leader, politician and the ruler of Rome. Many people love him for taking down Pompey, yet some people fear his power.

Brutus is a close friend of Caesar’s who also holds a high rank in office. While arguments for Julius Caesar or Marcus Brutus can be made as to which one may be the tragic hero, it is Caesar that is the real tragic hero in this story.

Without a doubt, Marcus Brutus is one of the main characters of the play. He is a highly ranked person in the government and a very good friend of Caesar’s.

Brutus is known for his reputation for leadership, honor and nobleness, but he is not always practical, and is often impulsive. Brutus has to make many difficult decisions throughout this play. However, these decisions frequently backfire. For example, on the Ides of March, Brutus says to himself, “ It must be by his death; and for my part. I know no personal cause to spurn at him, but for the general” (740.) This is when Brutus finally decides to join the conspiracy to kill Caesar. Later at the Senate House, the conspirators eventually kill Caesar.

Unfortunately for Brutus, he consistently misjudges the citizens of Rome and in the end, commits suicide. Without making these decisions, Brutus would not have reached his downfall.

However, Julius Caesar is the tragic hero. While on his way back from defeating Pompey, Caesar is met by a cheering crowd, filled with many people who adore him. Caesar was supposed to be the next great leader of Rome. Antony says, “I thrice presented him a kingly crown, which he did thrice refuse” (775.) He had refused the crown, offered to him by Marc Antony, three times. Caesar finally agrees to take the crown, and was planning to accept it on the Ides of March. As he arrives at the Senate house, the conspirators meet with him and kill him. It was not until Caesar’s funeral service that the citizens knew he had refused the crown three times before accepting, showing lack of ambition. However, refusing the crown may have
just been an act to get more people to like him.

Caesar, however, was ambitious. Casca tells us at the beginning of the play, “ Murellus and Flavius, for pulling scarves off Caesar’s images, are put to silence” (731.) Caesar had Murellus and Flavius killed for speaking out against him. This shows that he does not like when people do not agree with him and wants all people on his side. Brutus also says that Caesar is power hungry and wanted the crown. Caesar believes that he is above everyone else, which causes Brutus, Cassius and many others to fear his rule over Rome.

Both Brutus and Caesar can be considered tragic heroes because they’re both “larger than life” characters who have a tragic flaw that brings their downfall. But, without Caesar there would be no play. Caesar was going to be the ruler, but was murdered before he had the chance because of his ambition. Brutus made bad decisions and killed himself. So, Brutus may have the qualities of a tragic hero but in the end, it is Julius Caesar because it was his ambition that lead to his death. 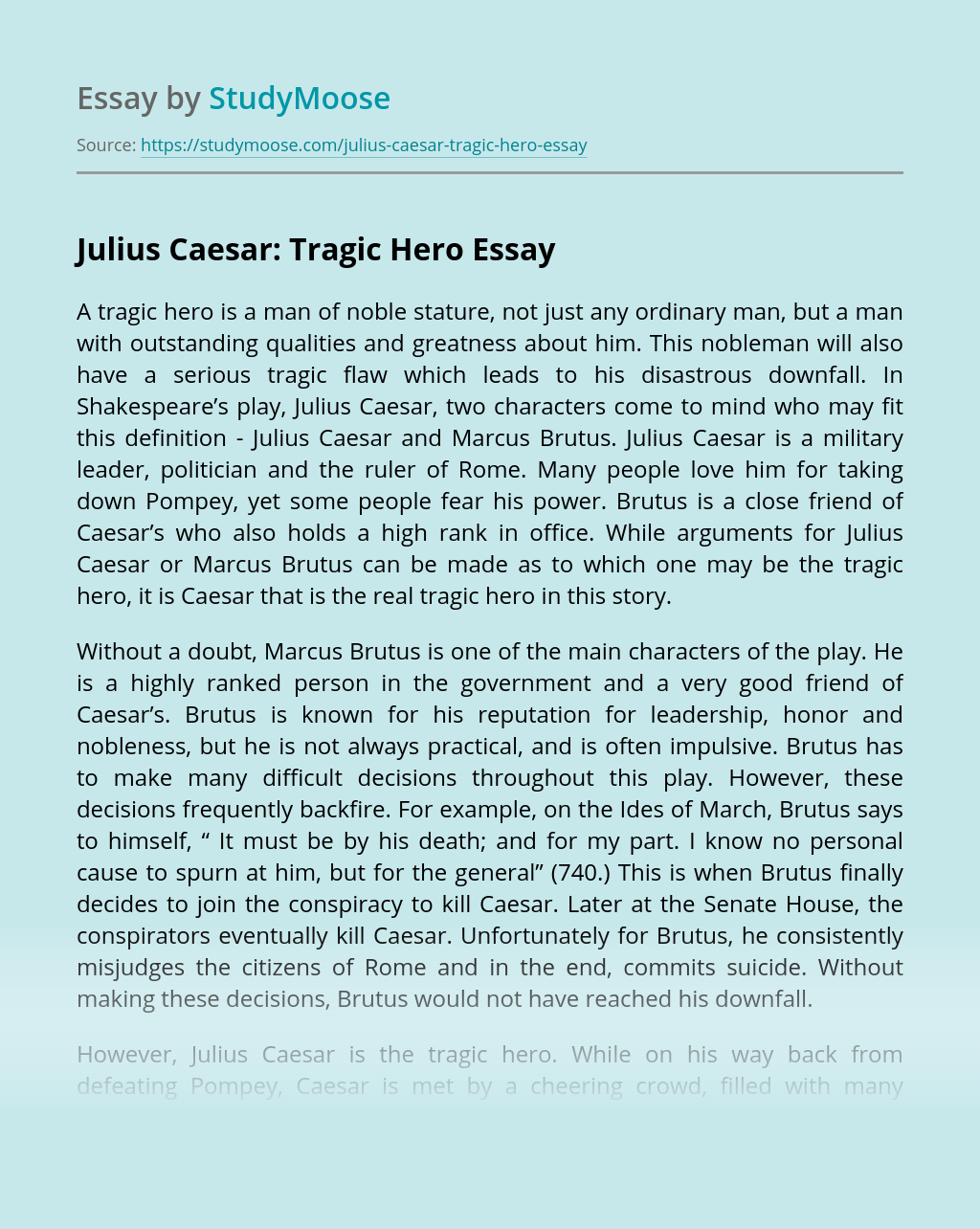