Japan is one of the most influential country in the world and has been making a footprint in many things. They have advanced in multiple regions of technology to help humanity move forward. Their culture is on a different level when we compare Japan to other countries. Manga and Anime are the center of significant Innovations and cultural debates in Japan. while anime and manga are very similar to each other in fields, manga is seen as Japanese comic books, while anime is basically Japanese animation.

Don't use plagiarized sources. Get your custom essay on
“ Japan is one of the most influential country in the world and ”
Get custom paper
NEW! smart matching with writer

when people think of anything to do with Japanese visual Art’s they tend to think of manga and anime. Anime by itself is extremely popular, we can use an example of this by exploring Hayao Miyazaki’s Spirited Away. Nowadays we may notice that Hollywood directors have made movies based off of books. that is similar to what some Manga and Anime is.

There are three main genres towards manga and they appealed towards very different types of audience.

Shounen is more towards boys with broad variety of genres commonly associated with action base plots with male protagonist. Shounen manga became more dominant in the nineteen sixties and we’re more for boys under eighteen.Shoujo mangas cover all of genres but are commonly associated with slender elegant males and romantic fantasy based plots. Jojo mangos started its only boom in the nineteen seventies for girls under eighteen. Gekiga manga Are more mature, serious drama, depicted in the more realistic and graphic style. The principal graphic difference towards the cuteness of children’s manga.

This type of mangoes emerge from the nineteen fifties and peaked around the sixties and seventies at work more for the working class youth, later high schoolers, and university students.

Starting with the history of manga it can be traced as far as the seventeen hundreds primitive versions can be used to describe wooden block prints. however back then it wasn’t as popular as it is now because of two reasons. Popularity and national circulation of newspapers remodeled on Western layouts bringing serialized comics into homes and workplaces throughout Japan. Second, the job market for manga authors was not that good so there were very little make authors. Before the war there was already a widespread acceptance of manga but it wasn’t in the form we know today. they were usually in the form of comic strips for children kind of like the ones they see in the western newspaper or short political cartoon strips for adult readers. This would stay until after the war Because of the changing political environment with the increased media regulation and censorship. with this huge change the content has been narrowed down to adapt towards national political objectives.

Manga also succeeded as a form of cheap entertainment for Japan since they were still worn down from the war. Manga in the post-war. Appeared in three main forms: picture card shows, rental mangas, and manga booklets. picture card show would use cheaply produce picture cards that a storyteller would I be accompanied with. Basically it’s a picture book that comes with its own narrator. second one was the growth of book rental shops. many artists would write books and magazines Atwood rented out about ten yen a day. Book rental shops where did Pierre everywhere from train stations the street corners and fill up meny spots throughout the city. the third form of mango in post-war Japan was published in small booklets directly to public. these manga books were very cheap and typically sold in discount book shops or tor shops with other high-end mangas ten times the price

While manga established the roots during the post-war period. It was through anime that broader Global audience became aware of the unique Japanese visual culture. Japan’s anime industry is very large and it still grows to this day. Revenue earned from film, Game, and Merchandising agreements alone has been estimated at more than twenty billion per year. The score anime consists of three major forms : feature-length films, TV shows, and video and DVD versions of anime shown on film on TV, and produced only for video and DVD formats. the significance of Manga and Anime so Japanese visual country is much more than economic. It has been increasingly related to Japan’s culture and national image.

Many people regard Spirited Away as one of the most iconic anime films. it was an extremely popular movie that pretty much everyone would have watched. It was a movie that some would say ss the face anime itself. Its foundation is the traditional Bedrock of Animation, which is the frame by frame drawing. The director Miyazaki began his career the style and only use computer when it helps speeds up some grunt work. The studio in charge of this movie dropped thousands of frames by hand. Throughout the movie we notice lots of symbolism through the different actions. for example one of the main themes of the movie is food and as we go along the movie you notice there are both rewards and consequences that comes with the food we eat.One very good example is in the beginning when Chihiro’s parents weight eat and eats non-stop until they turned into pigs & later on in the story we see Haku eats a magic medicine ball from the gods that ends up saving his life. This movie’s work was more colorful compared to Disney movies because they have such a black-and-white storytelling that creep eight adults with a dangerous simplistic sense of morality. compared to most anime this one had heart and were more based on real people.

Japan is one of the most influential country in the world and. (2019, Nov 20). Retrieved from http://studymoose.com/japan-is-one-of-the-most-influential-country-in-the-world-and-example-essay 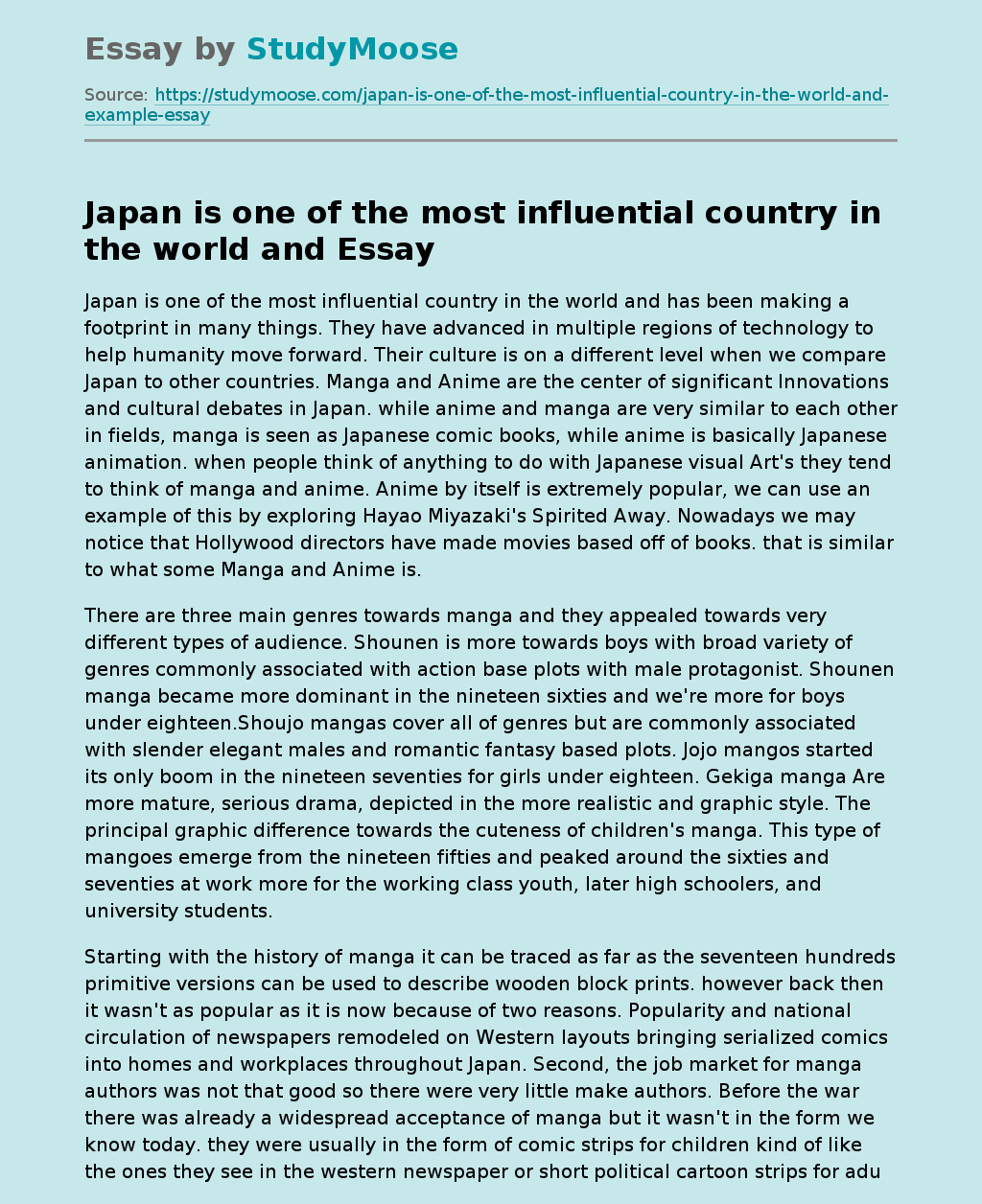