Jane Eyre /???r/ (originally published as Jane Eyre: An Autobiography) is a novel by English writer Charlotte Bronte. It was published on 16 October 1847 by Smith, Elder & Co. of London, England, under the pen name “Currer Bell. ” The first American edition was released the following year by Harper & Brothers of New York. Primarily of the bildungsroman genre, Jane Eyre follows the emotions and experiences of its eponymous character, including her growth to adulthood, and her love for Mr. Rochester, the byronic[1] master of fictitious Thornfield Hall.

In its internalization of the action — the focus is on the gradual unfolding of Jane’s moral and spiritual sensibility and all the events are colored by a heightened intensity that was previously the domain of poetry — the novel revolutionized the art of fiction. Charlotte Bronte has been called the ‘first historian of the private consciousness’ and the literary ancestor of writers like Joyce and Proust. 2] The novel contains elements of social criticism, with a strong sense of morality at its core, but is nonetheless a novel many consider ahead of its time given the individualistic character of Jane and the novel’s exploration of classism, sexuality, religion, and proto-feminism.

[3] Plot Introduction Jane Eyre is a first-person narrative of the title character.

The novel goes through five distinct stages: Jane’s childhood at Gateshead, where she is emotionally and physically abused by her aunt and cousins; her education at Lowood School, where she acquires friends and role models but also suffers privations and oppression; her time as the governess of Thornfield Hall, where she falls in love with her Byronic employer, Edward Rochester; her time with the Rivers family, during which her earnest but cold clergyman cousin, St John Rivers, proposes to her; and the finale with her reunion with, and marriage to, her beloved Rochester.

During these sections the novel provides perspectives on a number of important social issues and ideas, many of which are critical of the status quo (see the Themes section below). Literary critic Jerome Beaty notes that the close first person perspective leaves the reader “too uncritically accepting of her worldview” and often leads reading and conversation about the novel towards supporting Jane, regardless of how irregular her ideas or perspectives. [4] Jane Eyre is divided into 38 chapters and most editions are at least 400 pages long.

The original publication was in three volumes, comprising chapters 1 to 15, 16 to 26, and 27 to 38; this was a common publishing format during the 19th century (see three-volume novel). Bronte dedicated the novel’s second edition to William Makepeace Thackeray. Jane’s Childhood Young Jane argues with her guardian Mrs. Reed of Gateshead. Illustration by F. H. Townsend. The novel begins with the titular character Jane Eyre living with her maternal uncle’s family, the Reeds, as her uncle’s dying wish. The novel starts when Jane is ten years old and several years after her parents died of typhus.

Mr. Reed was the only one in the Reed family to be kind to Jane. Jane’s aunt Sarah Reed does not like her, treats her worse than a servant and discourages and, at times, forbids her children from associating with Jane. Mrs. Reed and her three children are abusive to Jane, both physically and emotionally. The servant Bessie proves to be Jane’s only ally in the household even though Bessie sometimes harshly scolds Jane. Excluded from the family activities, Jane is incredibly unhappy with only a doll and occasionally books in which to find solace.

One day, Jane is locked in the red room, where her uncle died, and panics after seeing visions of him. She is finally rescued when she is allowed to attend Lowood School for Girls, after the physician Mr. Lloyd convinces Mrs. Reed to send Jane away. Before Jane leaves, she confronts Mrs. Reed and declares that she’ll never call her “aunt” again, that Mrs. Reed and her daughters, Georgiana, and Eliza are deceitful and that she’d tell everyone at Lowood how cruelly Mrs. Reed treated her. 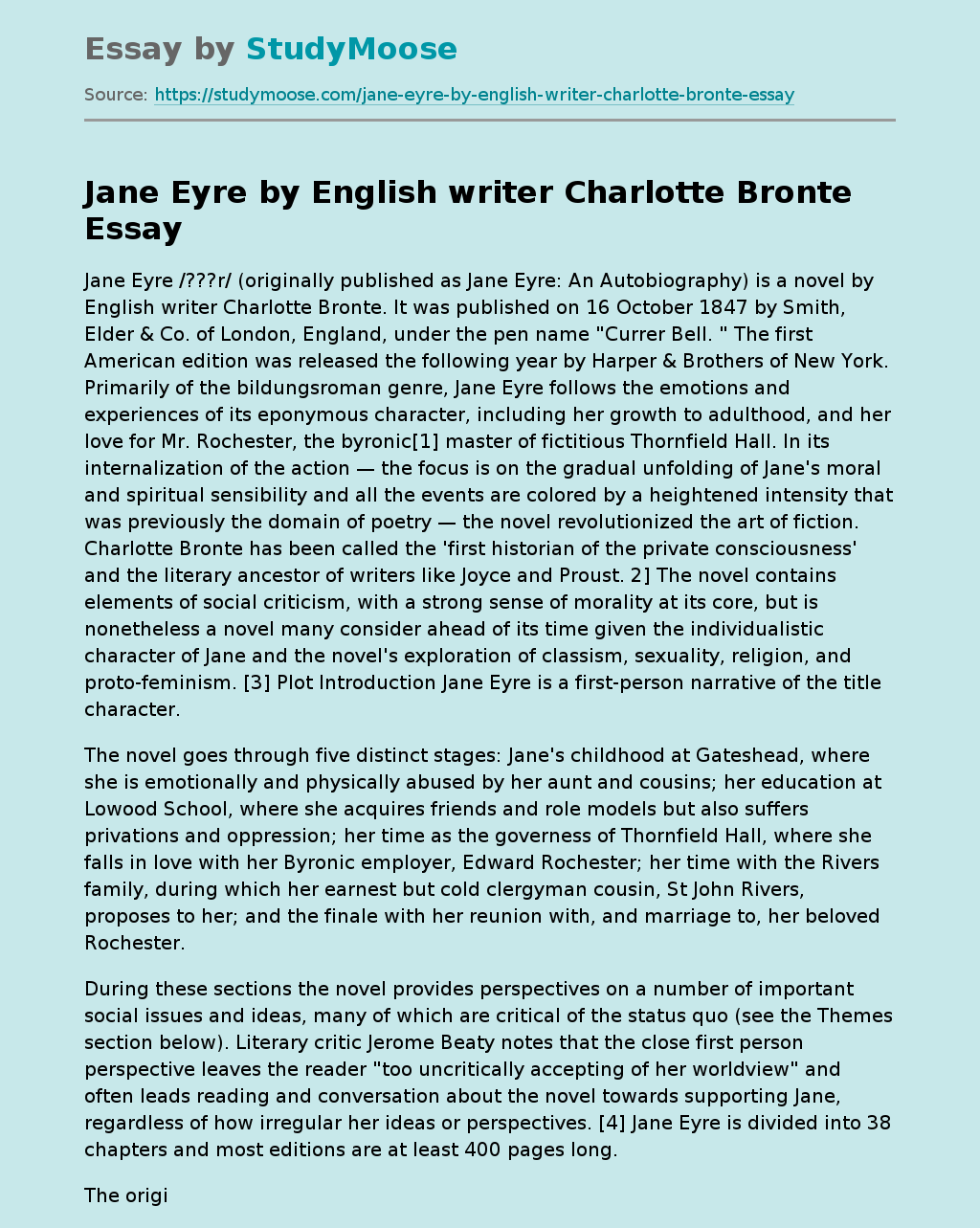