The author of Jane Eyre, Charlotte Bronte is the eldest of the three sisters ( Charlotte Bronte, Emily Bronte, Anne Bronte) known for her works that have become one of the classics of English Literature. During the Victorian era, women had occupations that were limited, there was more babysitting. At those times, the characters would always be men in the books describing a life that could overcome various obstacles since childhood. Because only men were thought to have internal features. But that was until Charlotte Bronte’s Jane Eyre was published.

Because Bronte lived a time when women writers were considered a sophomore, the book was published under the pseudonym Currel Bell to conceal her name. We see traces of her life in her book Jane Eyre, because of the effects of perspective on women in Bronte’s sociological position during her time.

Jane is a little girl whose mother and father are dead. At the age of ten, she is placed under the take care of her uncle.

When he dies, her sister-in-law takes care of her. Jane is constantly humiliated and insulted at every opportunity by cynical, disrespectful, mean-hearted Mrs.Reed and her children, Eliza, John, and Georgina. She is wronged and beaten by her male cousin, John, who is four years older than her. However, who is severely punished is always Jane Eyre. Then, she is sent to boarding school. She has bad days at the boarding school where she was sent. She stayes there for ten years and graduates as a teacher.

After that, she begins to work as a governess at Rochester’s house. It begins the intimacy between Jane and Rochester who is the owner of the mansion. This intimacy eventually leaves its place love. Edward Rochester touches Jane Eyre with his hands. Even though for the firs time, Jane recognizes that she has a body and catches herself uncertainty, she is not crushed, disrespectful against Rochester, but she doesn’t stop speaking. She always implies that she may have her own personal thought. They decide to get married. Mansion’s butler, Mrs. Fairfax says Jane ‘It is not appropriate for a governess to marry with the master.’

Although, this a word that suits the patterns of the Victorian era, Mr. Rochester who doesn’t care about a pile of noble and beautiful young girls around him, chooses Jane because of her personality. But everything is not as simple as it seems. Mr. Rochester is already married. His wife stays in the attic because she is mentally disturbed. Jane doesn’t know that. On the wedding day, the truth comes out. Jane Eyre, who fears that she will lose her self-esteem, escapes from the mansion regardless of how much they love each other. The fact that she is lied and deceived influences Jane’s decision to escape. Jane leaves the mansion with a few things in the morning. After a long walk, she gets into the first car she meets; the Couchman takes her where her money is. As she walks along the road, she realizes that she forgets her belongings in the car. She has no money, no belongings. She comes across home and the people accept her.

Apart from the servant Hannah, the three siblings- a man of religion, St. John, and his sisters Mary and Diana live in the house. She starts to work as a teacher in the village in order to contribute to his new family. Jane uses the name Jane Eliot with thinking that Mr.Rochester doesn’t stop following her. Coincidentally, St. John learns Jane’s real last name. Jane’s uncle in Madeira dies and all his wealth remains to Jane. Jane is rich no longer. St. John wants to marry Jane Eyre but she doesn’t want to. Jane decides to return to Mr.Rochester by listening to the voice inside her. She returns, the landscape she saw destroys her dreams. Thornfield is burnt. She finds out that his mad wife started the fire, died in the fire, that Mr. Rochester is alive, blind, and with one hand cut off. She researches him with the great power of love and learns that he lives in a wooded place. Jane says she wants to marry in spite of everything and after a while, they get married. One of Mr. Rochester’s eyes starts to see after treatment. They have children and they never leave again.

George Eliot’s The Mill on the Floss

George Eliot, her pseudonym is Mary Anne Evans, is one of the most highly praised novelists in the literary world in the 19th century because of her unique position in English literature. She wrote a large quantity of works of the highest merit and of far-reaching influence. Her attitude towards feminism has aroused wide attention and has been discussed hotly among feminist critics in different countries. The Mill on the Floss, which first appeared in1860, is regarded as the most excellent autobiographical novel of Eliot. The Mill on the Floss is one of the most powerful novels inspired by her own life. 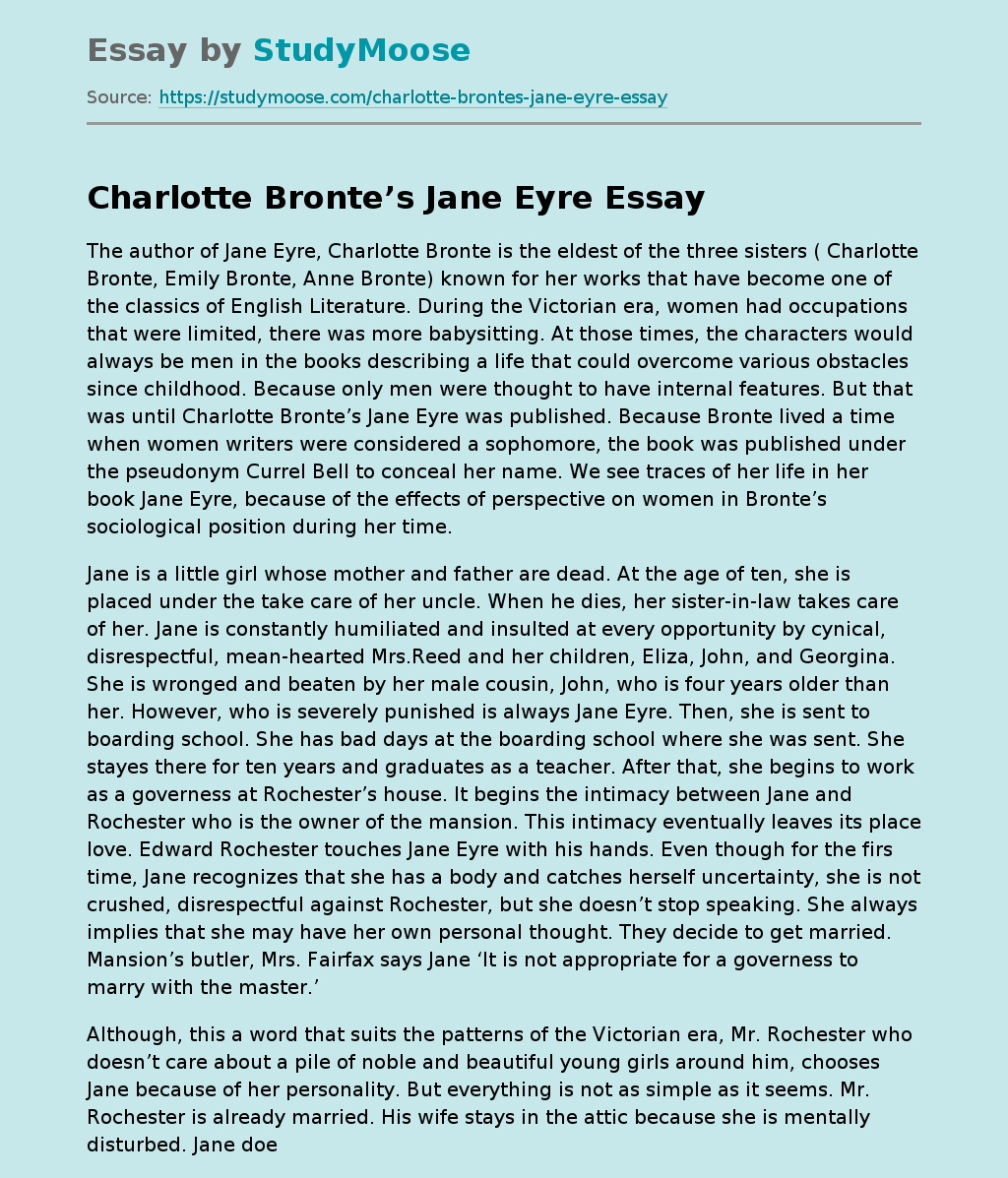