It Was A Usual Summer Morning In Story Brook

It was a usual summer morning in story brook; the birds were chirping children were playing on the streets. Henry who was only eleven woke up to the sweet smell of his mother Emma’s homemade waffles. Emma is very generous when it comes to her children especially with Henry because he is the youngest out of three. The eldest is Simon he is 17 tall and behaves, the middle child is Steven. Steven is 15 years old does not behave at all and loves to annoy Henry.

Don't use plagiarized sources. Get your custom essay on
“ It Was A Usual Summer Morning In Story Brook ”
Get custom paper
NEW! smart matching with writer

Emma told the children that school was starting in a few days and they all yelled with anger so she tried to cheer them up and said we’ll go buy the school supplies and stop for ice-cream on the way back “And whoever finishes first she said will get a double scooped ice-cream with any toppings so they all rushed to get ready. On there ay back they past by an abandoned home, henry looked up with a smile for winning the double scooped ice-cream asked his mom with curiosity “what is that place, can we go in” his mother stopped the car with all her force and looked at him and said: “don’t you ever go in that place don’t even look at it and that goes for you two too” pointing at all three children.

School stared and Simon is driving Steve and Henry to school when they passed the abandoned house, Steve dared henry to go in to the house alone on Friday night and when Simon heard there conversation he speeded up the car and stopped at the next paring spot and turned to them while scolding and said: NEVER GO IN THAT HOUSE DON’T EVEN WALK BY THAT HOUSE”.

Later that night henry was thinking about the dare.

The next morning henry walked to school because Simon and Steve were sick, and on his way to school where he passed the abandoned house and as he was walking past it his stood there for a second and stared at it for a second, he was about to open the front gate where he was grabbed by the shoulder by an odd old lady with light blue eyes thick grey hair tied up in a bun and knitting glasses and her name was Mrs. Potter. She scolded at him and said: “why young henry don’t you know better than to go in to this house and especially today?” henry looked at her with a puzzled face and he said, “ Why what’s today?” That night Henry ignored Mrs. Potter and gathered some of his friends and planned to go in that house the next day.

The next night was a Saturday, when Henry and all of his friends woke up they went over the plan again, that night they all rode on their bikes and when to that house as they parked right out of that house Jack, Henry’s best friend heard laughter and screaming so he ran behind the tallest one Zack.. As the kids opened the house door they herd a glass fall but no one could see anything because there was no lights. Jack remembered he had a flash light, when he turned it on the first thing the kids saw was a skeleton they all screamed and ran up the stairs wear they heard someone yell “die die die ”. As the kids turned around they found something standing behind them and when he turned on the lights they saw that it was a man.

When they apologized and explained and the man kindly called their parents to pick them up. When henry’s mom came to pick him up she told henry that, that man was his father and the reason she didn’t want him to go is that she didn’t want him to know. Henry asked what are the skeletons and he answered, “ I am science teacher” and the screaming “that’s my five year old son”, then why did Mrs. Potter say “especially not tonight” she replied, “It is her birthday” Henry found out that he had a dad and a new baby brother and henry learnt that he would never dis-obey his mother again.

It Was A Usual Summer Morning In Story Brook. (2016, Sep 02). Retrieved from https://studymoose.com/it-was-a-usual-summer-morning-in-story-brook-essay 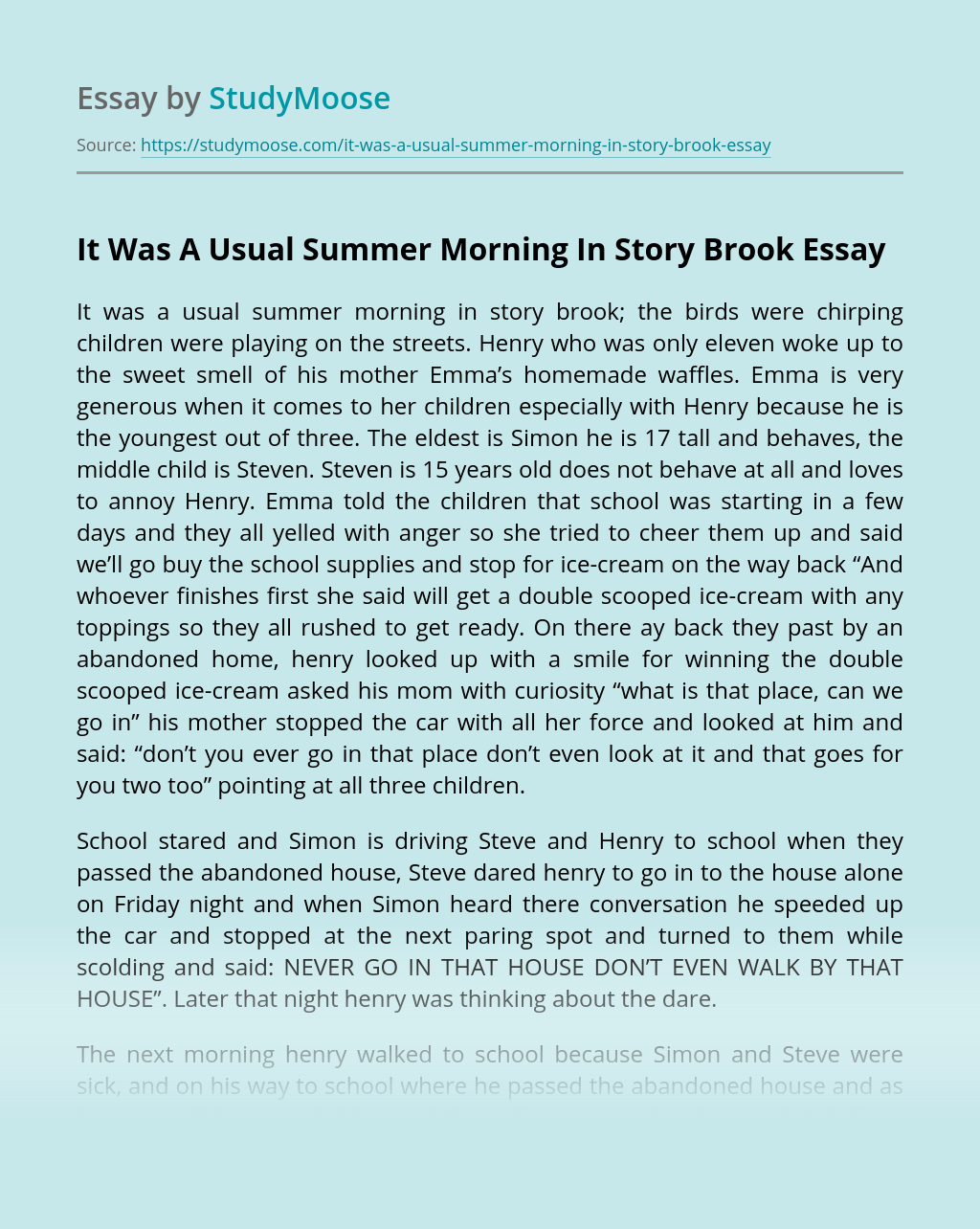