A group of eight Japanese gentlemen: Most of them wore glasses and most of the time they were smiling. They talked in a not very understandable language.

A beautiful young lady: Blonde hair and pretty girl. She had thin features and a gorgeous face. She looked very sophisticated.

And her fiancé: He looked very handsome too. He was very similar to her fiancé, he looked from the high socialite. – The Narrator: Physically he is in the setting of the story. The author of this short story made a wonderful description of each of the characters.

Turn in your highest-quality paper
Get a qualified writer to help you with
“ Invisible Japanese Gentlemen ”
Get high-quality paper
NEW! AI matching with writer

Physically he is in the setting of the story, sitting in a different table, worried about this particular couple which called him attention. He is looking both tables but he really got interested with the one where the couple was sitting. The observations that are made by the author of the story makes us, as readers more conscious about what is going on with the couple.

We can identify their worries, especially the ones of the girl, about her future as a writer and also her concerns about the wedding and their future as a couple. The narrator is sitting at a table, alone, and observes a group of eight Japanese gentlemen having dinner together, and beyond them a young British couple. The Japanese speak quietly and politely to each other, always smiling and bowing, toasting each other and making speeches in Japanese which the narrator doesn’t understand and describes in patronizing, derogatory terms.

They eat fish and later a fruit salad for dessert. The Japanese Gentlemen are in the beginning a distractor but then we can realized that are fundamental in this short story. They try to show us an important characteristic of the girl´s personality. Even though at the beginning of the story she seemed intelligent and a good writer, afterwards we can say that she is not a good writer because she is not a good observer. She is just a girl who is worried about her future and her career but she does not seem like a real writer because she does not have
the power to look beyond things. That is why the story is called “The invisible Japanese Gentlemen” because through her eyes Japanese Gentlemen were nobody they were almost invisible. She was so concerned about her own superficial worries that she left the restaurant and she did not have a look at them. Although they sit farthest away, the narrator catches their conversation.

The pretty young woman is a writer The female protagonist is a young woman who has just written her first novel. She is very ambitious and is always trying to please her publisher called Mr. Dwight. In order to be successful she changes the title of her book in accordance to her publisher`s wishes. She probably belongs to the upper classes which becomes obvious in the way she speaks. She is very self- centered, talking all the time about her problems without listening to her fiancée. She is oblivious to his feelings. She has no doubts about her success in the future. Her fiancé is a wine-merchant who has been offered a well- paid job by his uncle. He only listens to his fiancée and doesn`t mention his own plans and wishes. It becomes obvious that he isn`t sure about marrying her. He is dissatisfied with his situation. He is more cautious about the future. He is a realist maybe, but his fiancé is not. Writer is both jealous of the girl, because she is at the beginning of something and still has the ability to dream her future, and sympathetic, because she’s young enough to be his daughter and he would like to communicate his experience to her so as to preserve her from disappointments . 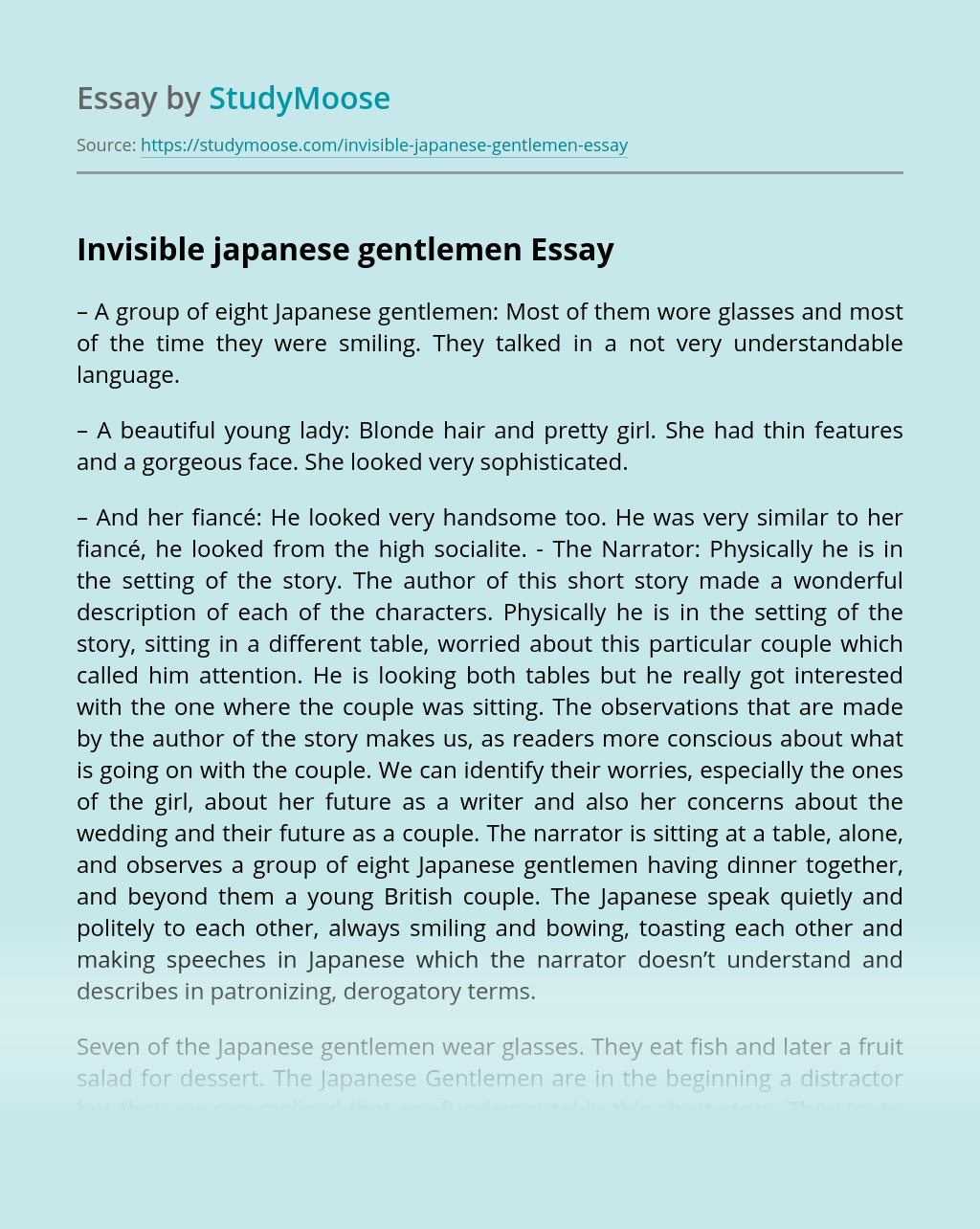 Turn in your highest-quality paper
Get a qualified writer to help you with
“ Invisible Japanese Gentlemen ”
Get high-quality paper
Helping students since 2015
Stay Safe, Stay Original