The three websites I have chosen is twitch, steam, and twitter. All three of them have different purposes.

Twitch is a website for people to stream many games such as Fortnite, Warframe and Overwatch

This is because on twitch some viewers will like to donate some money to them so that they money for entertaining them. Another way they make money is by them having subscribers to support them. This is often a monthly payment and it also gives the some special perks for them. For example, if they chat in the chat section they get a ranking when they speak. Another purpose of twitch is to advertise. This is because sometimes some streamers are sponsored by famous brands so they the brands get noticed.

Or sometimes at the start of the stream or when the streamer takes a break an ad comes up which is sort of relevant to the stream. For example if there is a stream about a game the ad will most likely be about a game of some sort. Same with sponsoring it will make the product more known.

Steam is a place where game developers go and sell their games so other people can play it.it is used as a review website because people when they play a game and enjoy the game they put a rating on the website.

One purpose of steam is to entertain. This is because there are hundreds of games for you to choose from so you can pick what is to your liking so there is a wide variety to choose from. This is because different people have different tastes. Also it is for the ease of life because you can have all your games on one place. Another purpose of steam is to make money. This is because people upload their games onto steam and whenever someone buys their game they can make money of it. Not only that, they have downloadable content for them to buy if they want for example, if you finished a game you can buy the extension of the game. Another purpose of steam is that to communicate. This is because underneath every game there is a comment section for everybody to rate the game and how they like and what they think of the game. You can also rate the game so that they can see it and improve.

The purpose of Hegarty maths is to let people revise for the exams on the internet. Many schools use it so that their pupils can use as an advantage when it comes to test so that the teachers can see who is not performing as well as other students, how long they spent on the task if they and watched the video at all. This website is an educational website for students and for teachers to help their students. The purpose of the website is to educate and inform because you can learn maths on the website

Desktop is a device that millions of in the world use for many reasons one of them being to connect to the internet. A desktop is referred to a desktop computer e.g. Dell, ASUS, Acer.

A desktop has a few components. One of being the most important of them all is the main computer. In the picture above the big black box have many components such as a disk player a headphone jack and USB ports. Inside the computer there are some components which are very important such as the CPU (central processing unit) which carry out instructions. The RAM (random access memory) is memory that can be accessed randomly. It also has a monitor which allows you to see what you want on the screen .The type of internet it will probably use is Ethernet or Wi-Fi connection as you don’t really move it around the place or the house. People would typically use it for gaming or work as you don’t move it around.

A laptop is basically a computer however it is much more portable than a desktop. They have everything that a desktop has, a mouse (touchpad), keyboard, RAM and storage. However because their usage is to be on the go, they have battery power. All laptops include a power adaptor so you can plug it in mains and connect it to the laptop and it will charge.

The picture above has picture of a laptop. It has 2 or 3 USB ports so you can plug in memory sticks and external memory ports. It also has touchpad that works as a mouse. It has a right click and left click button. It also has a keyboard for typing things in. the monitor it attached to the keyboard by a hinge so it can lift up and down. Since it is very similar to a desktop it will use Wi-Fi and Ethernet to connect to the internet. It will be used to be on the go. This is because it is small and light to carry so it is easily be put away into a bag. It could be used for teachers especially in a school

A tablet is a wireless portable personal computer. Typically it is larger than a laptop and bigger than a phone. It is touchscreen so the screen is interactive so any app you touch the tablet opens it. Since tablets are similar to phones some tablets have Android OS (operating system) or IOS OS so they do different things. For instance, android has the google play store however IOS has the apple app store.

The tablet has a camera on the back for taking pictures. Not only has that it had a head phone jack so you can listen to music. The type of network it will connect to Wi-Fi because if you’re in your home you can connect to your router. Also if you’re out and about you can connect to wireless broadband if you have 4g.

A game consoles purpose is to allow a person to play games on it. For example a ps4 lets you play many games on it such as call of duty overwatch and many others. However it has a limited space which means you can’t download many games unless you get them on the disk for instance most ps4 has 500GB but some has 1TB.

A smart TV is generally used to watch shows. Many TV require a box set to watch them without it you cannot watch any shows with it. It has a wide screen and a TV controller so you can type the show number in and pause it if it is not live. You can also attach it to the wall if you don’t have a TV stand. It will mostly use Wi-Fi as it needs to connect to the internet for the channels.

A smartphone is a very popular device. It has a touchscreen so you can use your fingers to interact with the screen. The also it typically has up to 8GB storage so you can download a lot of apps on it. Some phones have pre-installed apps on it such as for apple it has the app store and for android it has google play. Also they have different operating systems. It has two cameras, one at the front of the phone for selfies and the other at the back of the phone. Some phones have amazing graphics when you take a picture. The type of internet connection it will use is either Wi-Fi or wireless broadband as you will be outside and you still can listen to music.

Wireless broadband is the complete opposite of wired broadband instead of wires or cables it uses radio waves instead. This is very good when you’re outside so you can connect to the internet without the need for a router. This method of internet includes 4G and 3G.An advantage of wireless broadband is that you can connect to the internet without the need of an Ethernet cable or a router. A disadvantage is that it is more expensive than wired broadband as you use data which costs money. Also other people can connect to making your phone a hotspot. Not only that, when your data runs out you have to buy more data or you can go without data. The device that most commonly uses wireless connections is smartphones as they are design to be out and about

Wi-Fi is similar to wireless broadband. However Wi-Fi is in the home or at work so you cannot use it anywhere you want to go and connect to the internet. Wi-Fi is different from wireless broadband as wireless broadband doesn’t use something called a router. A router is a device used to allow someone to connect to the internet without the usage of wires. This works by sending radio waves and the devices picks the signals it connects to the internet. The disadvantages of this type of internet connection is that other people can connect to your internet and see what you are doing and possibly gain the access of your accounts if you do not have a strong password. An advantage of this type of internet connection is that you can use it anywhere in your house however some parts of the house such as the attic may not this internet connection as the range of the Wi-Fi is not strong enough. The devices that will typically use this kind of internet connection are things like phones, computers, consoles, phones and many more. 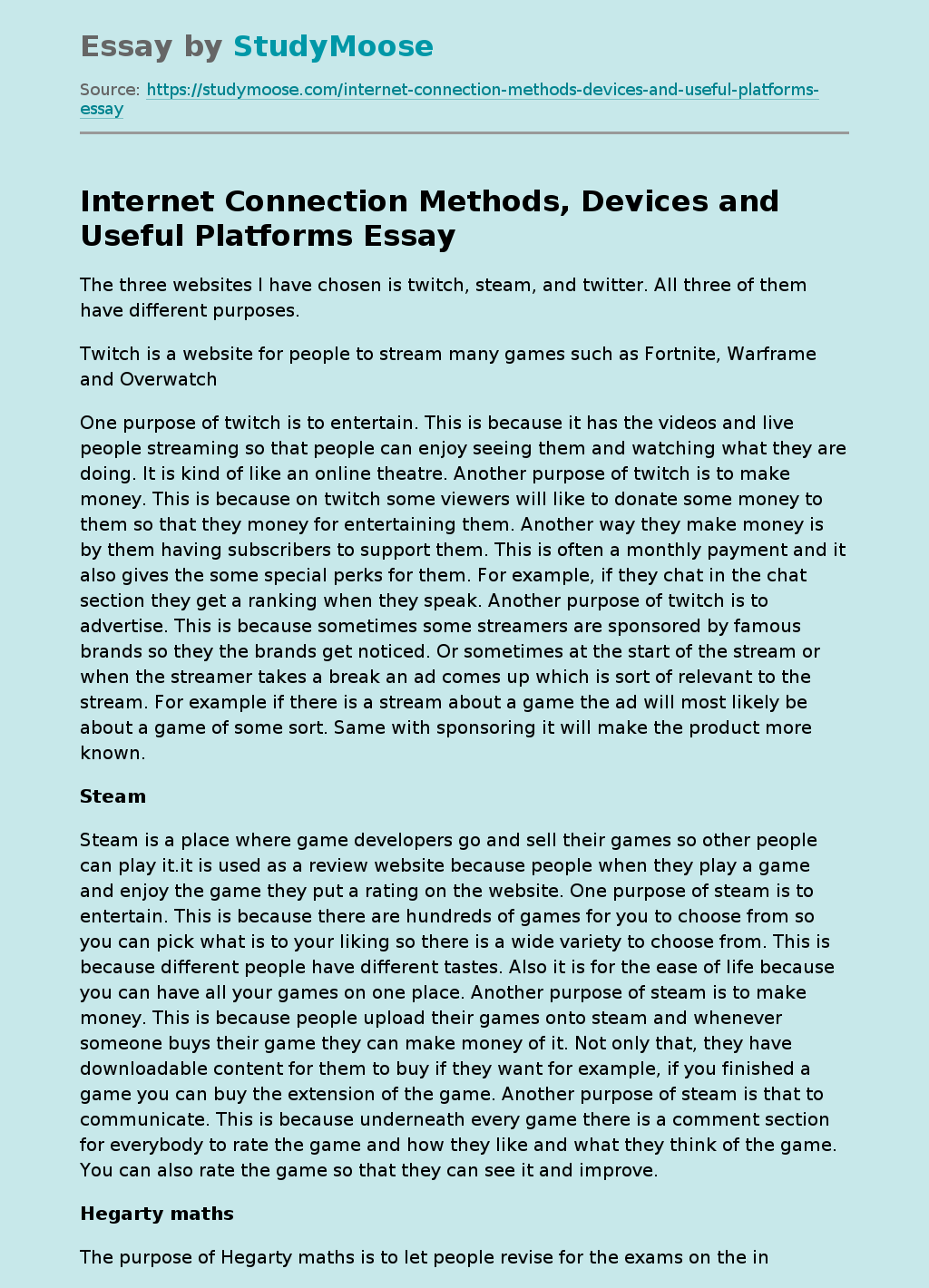