IBM is a multinational corporation that deals with communication technology, designing and selling of networking services. The company employees over sixty six thousand employees, its annual revenue as per 2008 was over thirty nine billion US dollars. It has its headquarters in New Orchard Road Armonk, New York. IBM is one of the top ten companies in the world that has been the most successful in acquiring other companies. Some of the best companies it has acquired have made it expand its operations as it integrates new skills and technology.

The company has won a good number of awards as it continues to receive recognition as the best in computer networking services. A part from networking business, the company is also involved in training programs to ensure empowerment of employees in the area of modern technology, Pugh (pp 20-26, 1995). It is also involved in environmental sustainability to maximize energy use. Despite the company being founded many years ago when technology was not at its peak, it has continued to make adjustments that has made its products to stand the taste of time.

The company is sensitive to technological innovations and is therefore quick to make the necessary adjustments to its product. Being a networking industry, it believes in working with other companies to enhance sharing of ideas. Its consumer oriented focus has made it to diversify its productions. The company has always responded to the needs of consumers by reaching them despite their geographical locations. The company has several branches in other nations making their products even more accessible.

IBM has had visionary leaders who have always strived to produce quality services.

The current CEO, Samuel J. Palmisano is credited for his quality leadership that has made him work with reputable organisations. He is a focused leader who clearly understands his role as a CEO of IBM system. The company continues to grow strategically as its employees enjoy a good remuneration. Background of the company Harlow Bundy who was a manufacturer of time records founded IBM which was previously referred to as ITR in 1906. He moved his time recording company from Binghamton to Endicott in 1911. ITR merged with two other companies to form IBM.

In the early years of its inception, the company employed three hundred workers bit by 1924 the employees had tripled to over nine hundred. The company had five buildings but by the end of ten years, the buildings had increased to twenty-five. Currently the company has numerous branches with thousands of employees. Currently IBM deals in products such as, IBM 650 RAMAC, the IBM 709 electronic data processing machine, the IBM 1401 data processing system and some of the System/370. The company was listed on the NASDAQ stock exchange. To enhance its operations, IBM liaised with other companies that would merge their products and talents.

The biggest deal of the company was with star wind software. The company acquired Bundy manufacturing corp. , computing Scale Company, dey patent company, productivity solutions, green pasture software, trigo technologies and many more Thompson (pp 15-21, 1999). IBM has made several acquisitions, even though some have not been successful; it remains to be a leader in comparison to other companies in similar operations. During the dot com boom of 2000, IBM was the best in the world with a capitalization of over five hundred billion US dollars.

By April 2009, the company had a capitalization of one hundred and four US dollars and still being ranked among the top companies. It was voted stock of the decade on NASDAQ. In 1990-2000, its7500 serious router was ranked third as the product of the decade. Apart from routing systems, IBM also deals in branch office routers, Ethernet switching, ATM networking, IP telephony, remote access and security. In 2002-2003, the company has received several awards namely; disaster relief and social responsibility in 2008, accessibility and kid smart in 2007, web adaptation in 2006 and reinvention education in 2005. 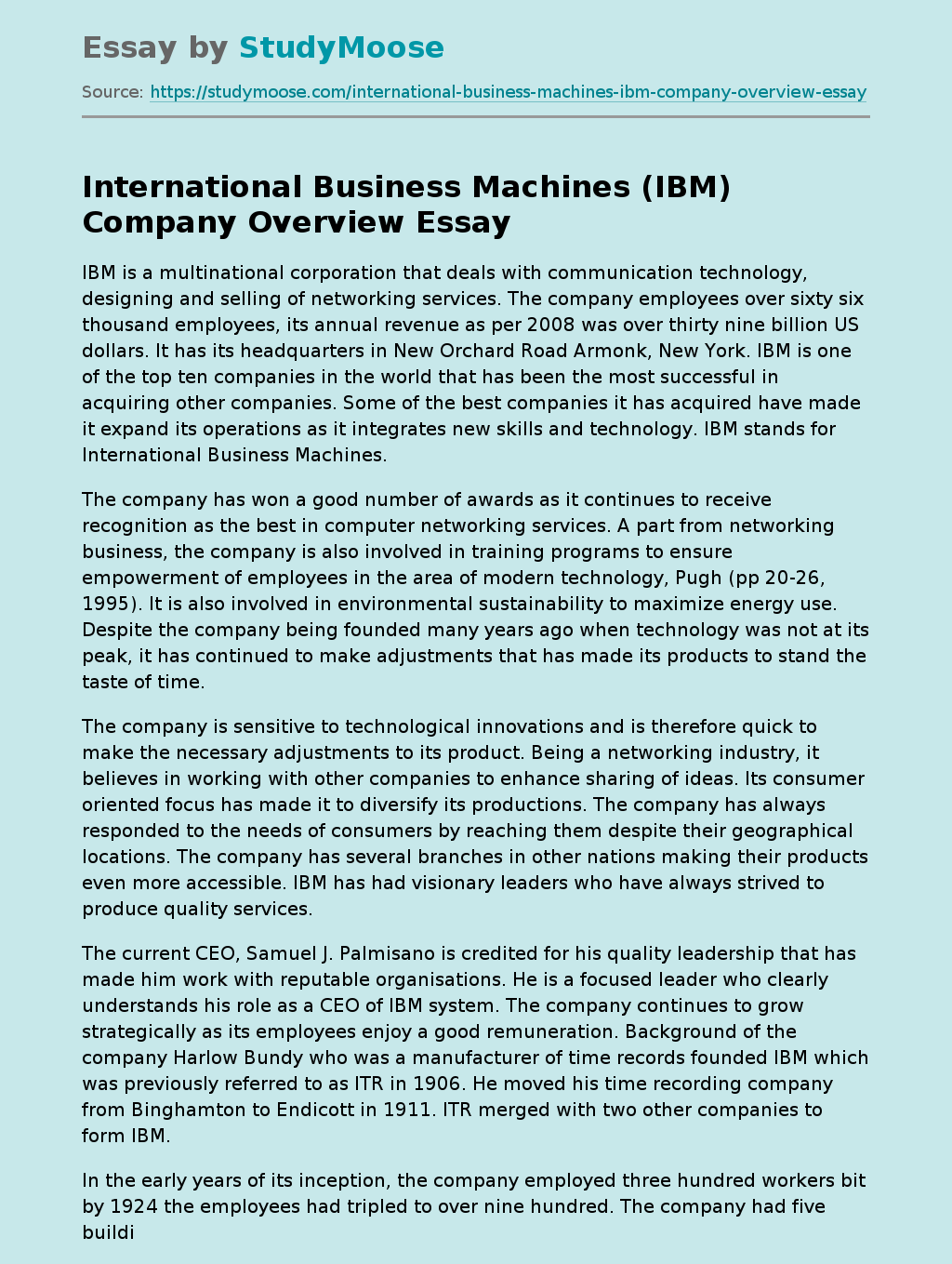