Analyse the theme of identity (e.g. national, gender) in two films that you have studied on the module. Trainspotting follows the lives of groups of friends in Edinburgh. This film has been known as an example of a ‘ new Scottish cinema,’ which leaves the stereotypes of tartanry and kailyadism which is imposed by filmmakers from outside Scotland, embraces urban and contemporary Scotland, and is the product of a Scottish film industry. Trainspotting “not only breaks with many traits typical of earlier cinematic representation of Scotland, but also demonstrates the difficulties of constructing a discourse conveying a new Scottish identity, which is meant to replace the old Tartan and Kailyard stereotypes”.

The regional identity of Trainspotting is Scottishness. This is established through the accent of the characters in the film and also the mise-en-scene. The Scottish slang is another identity of Scottishness, and the night club scene, Sput and Tommy’s conversation is subtitles, this distinctivness to the non-Scottish audiences have in the understanding of Scottish accents.

In the five-a-side game at the beginning of the film, Renton and Begbie are both wearing green and white shirts as one of the Edingburgh teams. This gives the characters their part of Edinburgh and that they are part of the Catholic community. The dirty kit they are wearing gives the presence of economic marginalisation and low lifestyle.

The idea of Scottish national identity is seen throughout the film. The tourist ideal of Scotland is taken away from the everyday experiences of the characters, and Renton expresses the rejection of “official” Scotland in the film’s most famous scene when the boys visits the highlands.

In Trainspotting the Scottish dialect in the film shows the Scottish heritage, giving a continual reminder to the viewers of the nationalistic differences between the English and Scottish. The film is made comical by the dialect, which opens a new angle from which to approach the audience.

In Trainspotting there the female, she is shown as a Heroin addict, compared to the other five males. This goes with the traditional way to understand the drug subculture as male dominated. The reasons are linked to gendered ideas about women, even the connotations of heroin addictions are criminality, filthiness. These things are generally understood to apply to male members of the low social class. The other female character, Diane, she is seen as strong articulate confident young girl, very mature for her young age. She blackmails me to see Renton again and if he doesn’t she’ll tell the police.

Nudity is outnumbered in more with boys than girls. Renton and Diane in full frontal nudity, Spud however is undressed by his girlfriend as he lies on the bed, we see Mother Superior backside as Alison injects Heroin into the veins of his penis. The camera does not move in the nude shots, and there are no close-ups on the private parts and nor does the camera cover the naked bodies shot; this objectifies the nakedness of the characters in the film. There is no female or male gaze, and the way which nudity is shown in the film, Trainspotting is gender-neutral.

This film is known to be for “one for the boys”, it deals with gender issues such as the questioning of both the male and female dichotomy and the hegemony of heterosexuality.

By exaggerating the gender stereotypes are one of the main means that are used to film to appeal to the audience is humorous ways. One example is Begbie. He is seen depicted as being finding difficulties to solve conflicts with help of anything but violence. He is seen sitting around in Renton’s flat wearing his underwear, and spitting beer on the floor, he is seen being represented as a completely devoid of emotions that he does not even see his friends dislike him and all this strikes is to being over the top but we just laugh at it.

Jamon Jamon is a Spanish film, filmed in Spain. In this film there are many elements to the Spanish nationalism that keeps the film in tradition with Spain. First image that is usually seen throughout the movie is the black Bull billboard. You see the Bull bumper stickers are seen throughout Spain, and the connotation is linked with Spanish culturalisim, including Bullfighting. In the place Catalunya you would see donkey bumper stickers, as meaning of Catalan identity, the humble donkey being the symbol of that region. The Bull is the official emblem of Spain, linking it to bull fighting.

In the conclusion of the credits, in Jamon Jamon, the black background is shown to be a gigantic billboard advertising brandy and representing a bull. As the field of vision open to reveal the space of narrative action, (desert scarred by a busy motorway) a final circular patch of blackness (the testicles of the bull) remains dominant in frame and provides the backdrop for the director’s name. The most obvious, way the film defines the perspective and interest to be the relationship between the story the actions the place and various (symbolic and iconic) representation of masculinity.

Another example of muscularity and identity in national culture is the scene where Raul is practicing bullfighting using a wheel-barrow. Raul shots of him wearing a tight blue shorts, and grey sleeveless t-shirt, and close up shots are being used to show his muscularity and close up of his big penis bulging through the shorts.

The identity of male is often played with connotation of meat. Hence the translation of the film name Jamon Jamon, as Ham Ham. Throughout the film, there are a lot of shots of male genital areas. The scene where they are looking for their next underwear model, there is a line of well built muscular men standing, just wearing underpants. This gives the connotation of the male’s meat, shown with close up shots of each man’s underpants.

Female identity is shown both dominant, but also stereotyped. Jose’s mother, Conchita plays the role of a high class business woman. She is seen looking glamorous, clean, expensive white clothes, and seen driving a Mercedes. She stands out from the other characters, as even the car, is much more expensive than other vehicles around in the film. Lorries and broken motorbikes are seen. She seems to have power with money, bribing Raul with money to try and seduce Silvia to break marriage with her son.

Silvia however is like the opposite; she is seemed to be the working class girl of Spain. She has no power, but her sexuality and innocence and good looks bring her own kind of power. The stereotyped is shown, as she is seen working in a factory, primarily female workers, who all are sewing underwear for men.

The male identity starts off with being masculine. Many scenes of the male, especially Rauls, are shown to look tough, strong and sexy looking man. Audience for the female gaze. But then again, there is slight connotation to represent him with ham. Him being treated like a piece of meat, he is bribed with money and gifts to do things for Conchita. She offers him money to sleep with Silvia, and offers him a motor bike and Mercedes if he continues to sleep with her. It shows that he has nothing, and will be willing to to do anything at a price.

The line of meat in the factory all lined up, on ropes, are seen again in connotation going back to the scene where they are selecting an underwear model. They are all lined up similar to the ham that is tied up in Rauls home.

McArthur C 1982 Scotland and cinema: the iniquity of the fathers, in C McArthur (ed.) Scotch Reels: Scotland in Cinema and Television. London: BFI: 40-69. 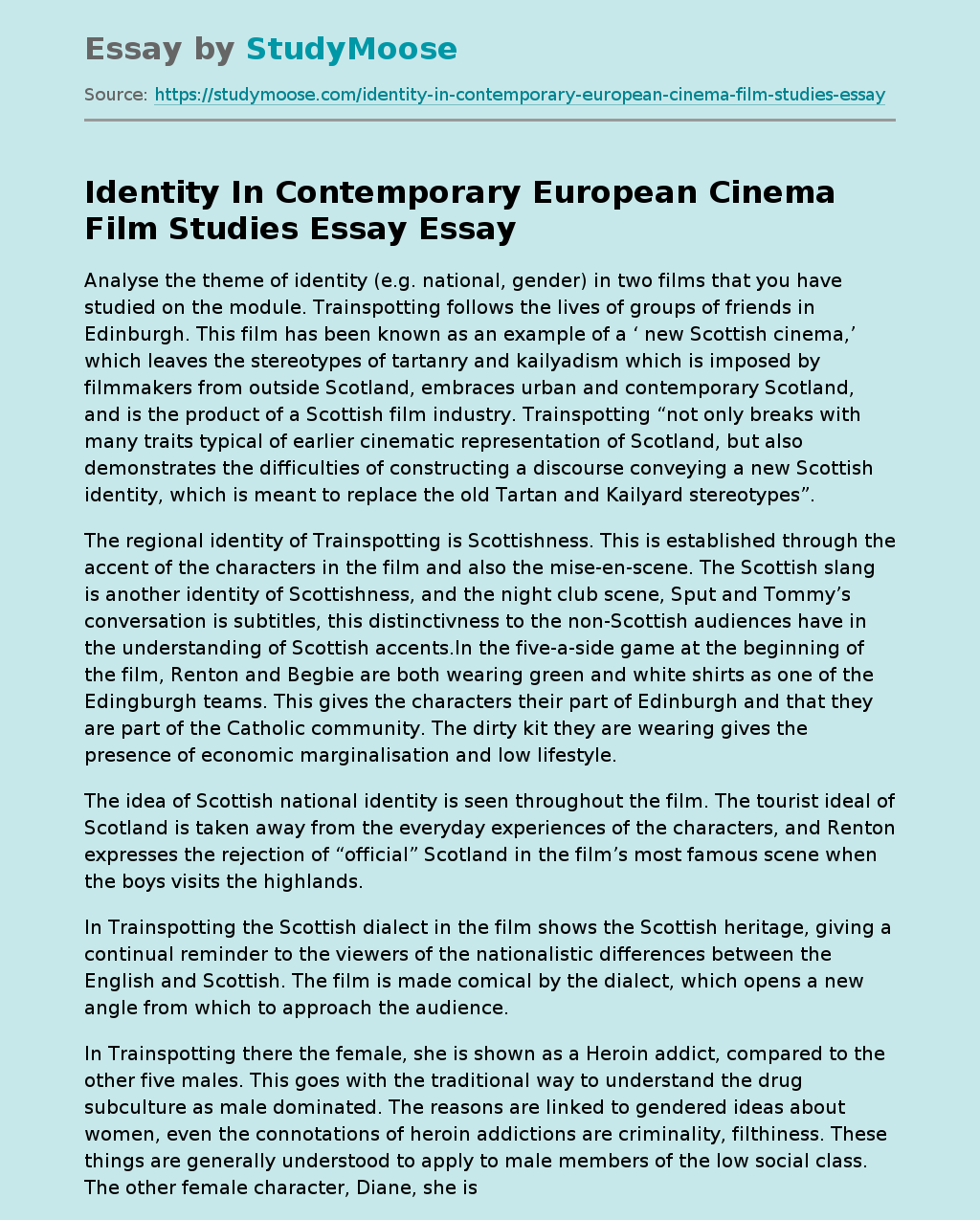