Identify the strengths and weaknesses of Tokai UK’s international strategy.

The Tokai Company was founded in 1947 in Hamamatsu, Japan and produced all forms of musical instruments,including a large range of pianos. Tokai instruments first appeared in the UK in the early 1980s when they were imported by a company called Bluesuede Music. At that time the two biggest names in electric guitars were those produced by the American companies Fender and Gibson, who both produced high quality electric guitars but at a price that was prohibitive for the average amateur guitarist.

Don't use plagiarized sources. Get your custom essay on
“ Identify the strengths and weaknesses of Tokai UK’s international strategy. ”
Get custom paper
NEW! smart matching with writer

Tokai competed against Fender, with products that replicated the Fender quality and also closely esembled their guitars but for half the price. Not surprisingly the Tokai product stood alone in the marketplace and competed with Fender by making quality instruments available to customers who couldn’t afford a genuine Fender or Gibson guitar. Tokai’s biggest seller at the time was the ST50 which resembled the famous Fender Stratocaster. However, Fender issued writs against Tokai which forced them to change the designs so as to not infringe Fender’s copyright.

Imports continued on for a further three years and Bluesuede Music did remarkably well with the product, using sales agents out on the road selling guitars to retailers. Unfortunately, in the mid-eighties one of the partners left Bluesuede owing the company and Tokai a lot of money. At that point Bluesuede had to stop the import of Tokai guitars.

At the beginning of 2002 Nick Crane, a British entrepreneur, went to Japan to see Mr Shohei Adachi, the managing director of Tokai, and agreed a deal to import the company’s guitars once more into the UK.

This started as a small operation and the products began to trickle into the UK. Shortly afterwards Nick Crane approached Bob Murdoch, who had 25 years’ experience in the music wholesale and retail business. Bob Murdoch saw the potential of these instruments on the European market and became a partner in Tokai UK in early 2002.

The company began by working from a small garage, but over the subsequent 18 months turnover increased by 200 per cent and they are now selling into Ireland, Italy and Spain. They had a huge market in Germany but, as we will see later, have now pulled out of the market. Tokai UK now operates from premises on an industrial estate at Dinnington, South Yorkshire. Nick Crane left the company to follow other interests in Spain; Bob Murdoch bought out his partner and now has overall control of Tokai UK and plans to launch Tokai across the pan-European market.

Identify the strengths and weaknesses of Tokai UK’s international strategy.. (2016, May 09). Retrieved from http://studymoose.com/identify-the-strengths-and-weaknesses-of-tokai-uks-international-strategy-essay 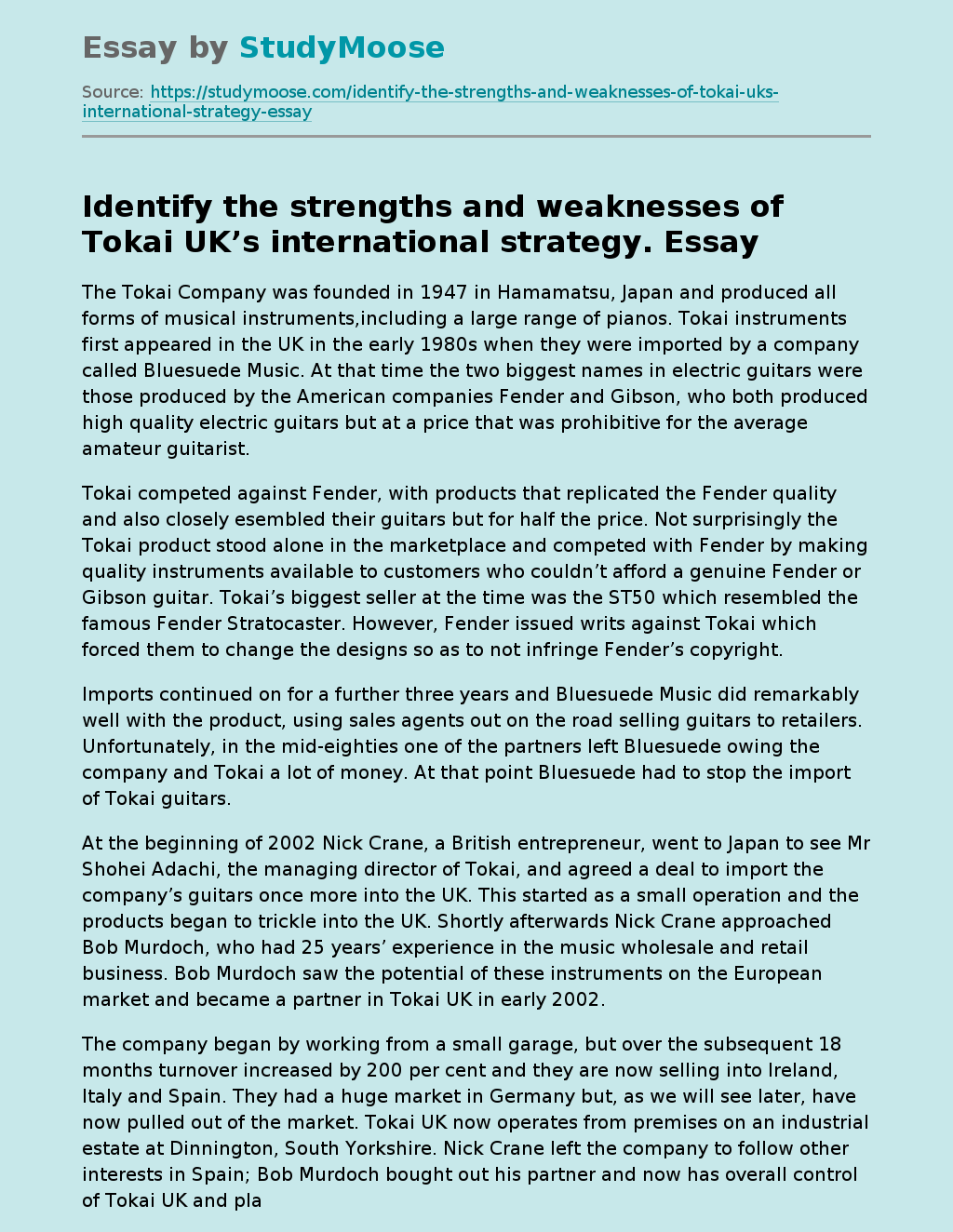