How are women portrayed in The Millers Tale?

The Miller’s Tale was written and is set in medieval England, a time when women had much fewer rights than men, and were more or less just owned by their fathers, and then by their husbands when they got married. 17th century United States in The Crucible has a slightly different society but also has the similar male dominance. The Handmaid’s Tale is set in a dystopian future where women are also heavily dominated by men, but in a completely different way.

Don't use plagiarized sources. Get your custom essay on
“ How are women portrayed in The Millers Tale? ”
Get custom paper
NEW! smart matching with writer

This essay is about the ways that women in general are portrayed and perceived in these three stories, as well as touching on the characters of the individual women in these tales. The Miller’s Tale is one of the stories from the Canterbury Tales series, all written in poetic form, by Geoffrey Chaucer. These tales in the series are all told by different pilgrims, who are also fictional, so this uses a story-within-a-story literary device. Their tales are part of a contest to entertain each other on their pilgrimage from Southwark to Canterbury Cathedral.

In The Miller’s Tale, it is the miller’s turn to tell a tale, and he tells the story of a devious young student called Nicholas, who is attracted to the much younger wife of a carpenter, his neighbour, and plots a cunning plan to sleep with her. He does this by telling the dim and simple carpenter that a flood is coming, and that he must tie some tubs to the ceiling of his home for the three of them in order to keep them safe.

Whilst the carpenter is away at work on these orders, Nicholas takes the carpenter’s wife Alison downstairs and manages to seduce her until she very willingly has sex with him.

Alison from The Miller’s Tale is eighteen years old, and described as passionate and highly attractive. Her faithfulness in marriage to her husband is very questionable when she allows herself to be easily taken in by this other man, her neighbour, and commits adultery with him without much care for her own husband. Near the beginning of the Miller’s Tale, there is a clear, physical description of Alison, being a lively woman who might want to have an affair.

For she is “wilde and yonge”, meaning that her behaviour is rather uncontrolled, and her older husband is jealous and possessive of her. The miller describes her as having a “body gent and smal” as a weasel’s, meaning that she has an attractive slim figure, and that suggests that she is also a very sly character just like a weasel. Alison is also vain and very concerned about her appearance. She is selfish and cares more about herself than of other people, and she does not even think much of all the men that take a strong liking to her.

She has established herself as a not at all a likeable character in this story. The fact that she sleeps with Nicholas right in her very own marital home, whilst her own husband is just upstairs at work at the very same time, must show how very daring she is, because he could have easily come downstairs and catch them in the act. But it could also mean that she does not actually really mind or care much about the carpenter’s feelings or whether he knows that she is being unfaithful to him or not.

They are similar ages, and are both selfish and sexually immoral women who both have illicit sexual affairs and go against societal and moral rules that are expected of them for their own personal gain and pleasure. Also, neither Alison nor Abigail show any shred of remorse for their sinful actions. Where Alison goes behind her albeit dim husband’s back to sleep with her neighbour Nicholas, she is in turn fulfilling his desiring lustful plan. Sex outside of marriage was very wrong in her time, let alone committing adultery.

Alison might have just married the carpenter for the sake of security, since he is described in the story as a “rich gnof”, but obviously cannot control her extramarital sexual urges and is very open to acting on them whenever the chance arises. Seventeen year old Abigail betrays her position as a house servant in the Proctor’s home by having an affair with John Proctor whilst he is still married to his kind wife Elizabeth, who happens to be ill at the time the affair occurs.

However, there is much more to Abigail than involvements in adultery, as this leads to her seemingly falling in love and becoming obsessed with John Proctor. She says to him in Act One before the trials: “I know how you clutched my back behind your house and sweated like a stallion whenever I come near… It’s she put me out, you cannot pretend it were you. I saw your face when she put me out, and you loved me then and you do now”.

Abigail has seriously formed an impression that John is just as infatuated with her and she is with him, even though he constantly denies it and tells her she is speaking a “wild thing”. So at the very start of the play, she is casting a spell to kill Elizabeth so that she can be out of the way for herself and John to be together, as she believes that Elizabeth is the only person in her way of having John. We can sympathise a little with Abigail, as we know she has had a very troubled past. She is an orphan, who had watched both her parents being viciously murdered by Indians one night a long time ago.

She reveals this in Act One, after ordering the girls to lie about their activities in the woods, she viciously threatens to get them in the night, and in her own words says “you know I can do it: I saw Indians smash my dear parents’ heads on the pillow next to mine, and I have seen some reddish work done at night, and I can make you wish you had never seen the sun go down! “. This traumatic event that was imposed upon her at such a young age does provide some explanation and understanding as to why her personality seems rather unstable, and why she acts so brutally towards other people.

On the other hand, we don’t really know anything about Alison’s past, so we assume she is just a nasty sly character and though her crimes are not as dire as Abigail’s, we do not really have the evidence to feel as much sympathy for her behaviour. Though I think we can like Alison to some extent, as even though we condemn her behaviour, the men in her story are not as admirable as John Proctor so maybe her behaviour does not seem so bad.

She even has the advantage of being secure in a marriage, unlike Abigail who is an unmarried orphan living with her uncle. The presentation of Abigail in The Crucible is rather dark and frightening, a good example of this being at the court scene, where she is deliberately causing hysteria by throwing around accusations of witchcraft, and even going as far as pretending to be bewitched by Mary, and getting all the other girls to make believe the very same thing and repeat Abigail’s exact chants and actions.

How are women portrayed in The Millers Tale?. (2017, Jul 04). Retrieved from https://studymoose.com/how-are-women-portrayed-in-the-millers-tale-essay 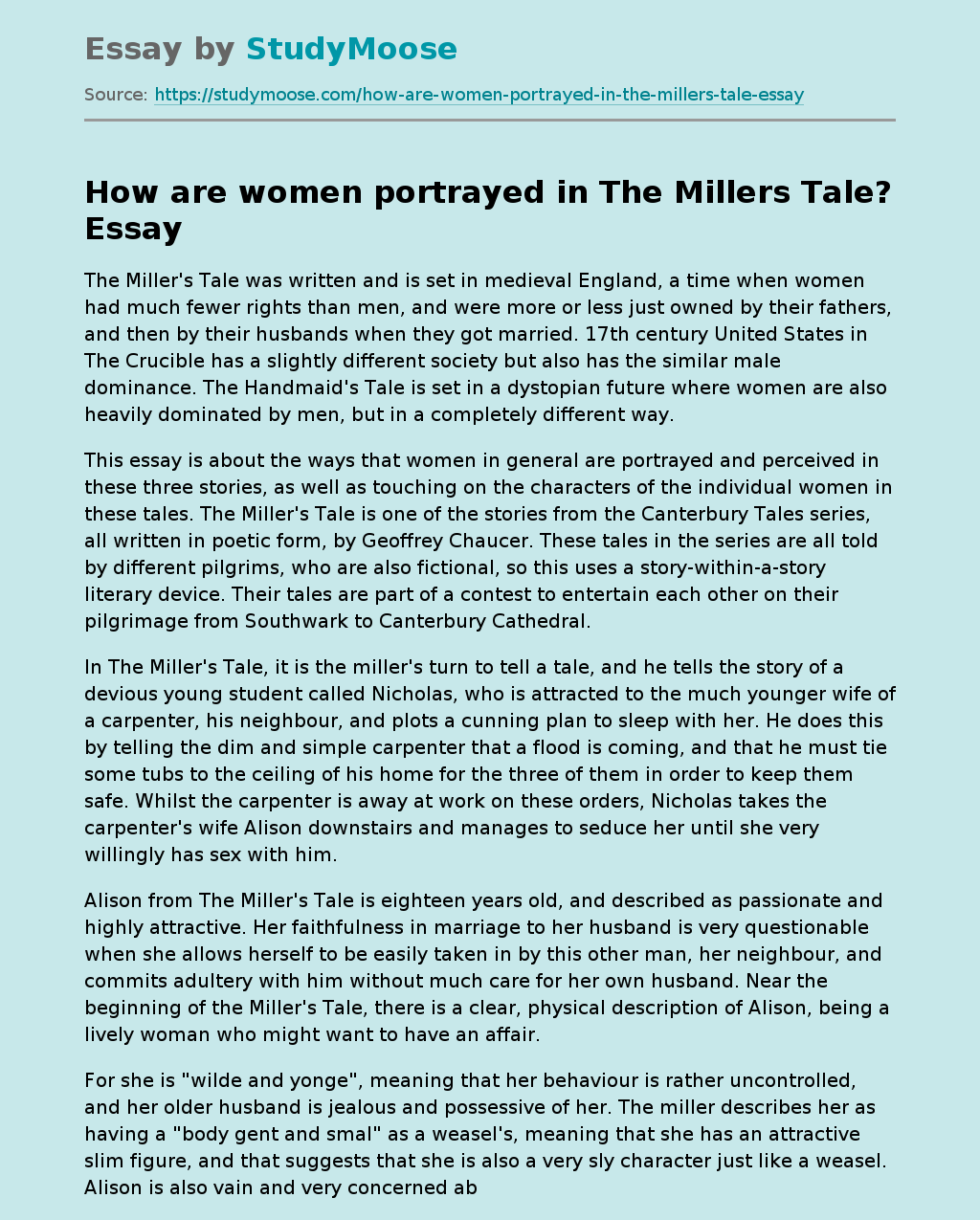