Holden Caulfield in "Catcher in the Rye"

Holden Caulfield, in The Catcher in the Rye, is much like the typical teenager of today. Throughout the novel, Holden goes through problems that many modern teenagers can relate to. Holden is a lonely teenager who struggles to find direction in life. His actions are very similar to those of teenagers today. Some important characteristics Holden shares with modern teenagers are his longing to be free and independent, his struggle between childhood and adulthood, and the fact that he is lost and does not know what he wants to do in life.

Don't use plagiarized sources. Get your custom essay on
“ Holden Caulfield in “Catcher in the Rye” ”
Get custom paper
NEW! smart matching with writer

Also, like many teenagers today, he has to deal with things such as sex, violence, and alcohol.

A big problem Holden goes through is his struggle between childhood and adulthood. He is sixteen years old, which is the age when a person is almost an adult, yet still a child. A child who is innocent, supported by his parents, and is not yet ready or possesses the maturity to go out into the world and fend for himself.

This struggle is symbolized by Holden’s gray hair. This is something many teenagers face today.

Like many modern teenagers, Holden wants to be independent. He wants to make his own decisions and live on his own. He has lived in schools most of his life, away from his parents. When Holden gets kicked out of Pencey, and he knows that his parents will find out, he decided to go back home after they do, in order for his parents to have dealt with the news.

This shows how Holden does not look for help from his parents. He wants to deal with the problem himself by applying himself his next year in school. Another example of Holden’s need to be independent is when he suggests to Sally that they go away somewhere and live together.

On page 132, Holden says “How would you like to get the hell out of here? Here’s my idea. I know this guy down in Greenwich Village that we can borrow his car for a couple of weeks. He used to go to the same school I did and he still owes me ten bucks. What we could do is, tomorrow morning we could drive up to Massachusetts and Vermont, and all around there, see. It’s beautiful as hell up there. It really is.”…”We’ll stay in these cabin camps and stuff like that till the dough runs out. Then, when the dough runs out, I could get a job somewhere and we could live somewhere with a brook and all and, later on, we could get married or something. I could chop all our own wood in the wintertime and all.” Holden longs to go away and be independent.

Like teenagers today, Holder had to deal with alcohol, sex, and violence. Like any male teenager today, Holden thinks about sex. He wants to experience it and says that he had had many opportunities to do so, although he never had sex. Holden, wanting comfort and affection, invites a prostitute to his room, but never has sex with her.

A big problem among teenagers nowadays is violence. This is a problem that is very difficult to solve and sometimes cannot be avoided. There are times in the novel when Holden faces violence, like when he gets in a fight with Stradlater.

Throughout the novel, Holden turns to alcohol when he gets depressed. He obtains it very easily, and gets drunk at one point. This occurs frequently among teenagers today. They feel that alcohol will make them older and give them maturity.

These are the ways in which Holden is very similar to the typical teenager of today. His characteristics, feelings, and actions are those that many teenagers can relate to. Problems that Holden deals with throughout the novel are problems that many teenagers face in their everyday lives. Feelings that Holden has are like those of modern teenagers, who are in many ways, just like Holden.

Holden Caulfield in "Catcher in the Rye". (2016, Jul 15). Retrieved from http://studymoose.com/holden-caulfield-in-catcher-in-the-rye-essay 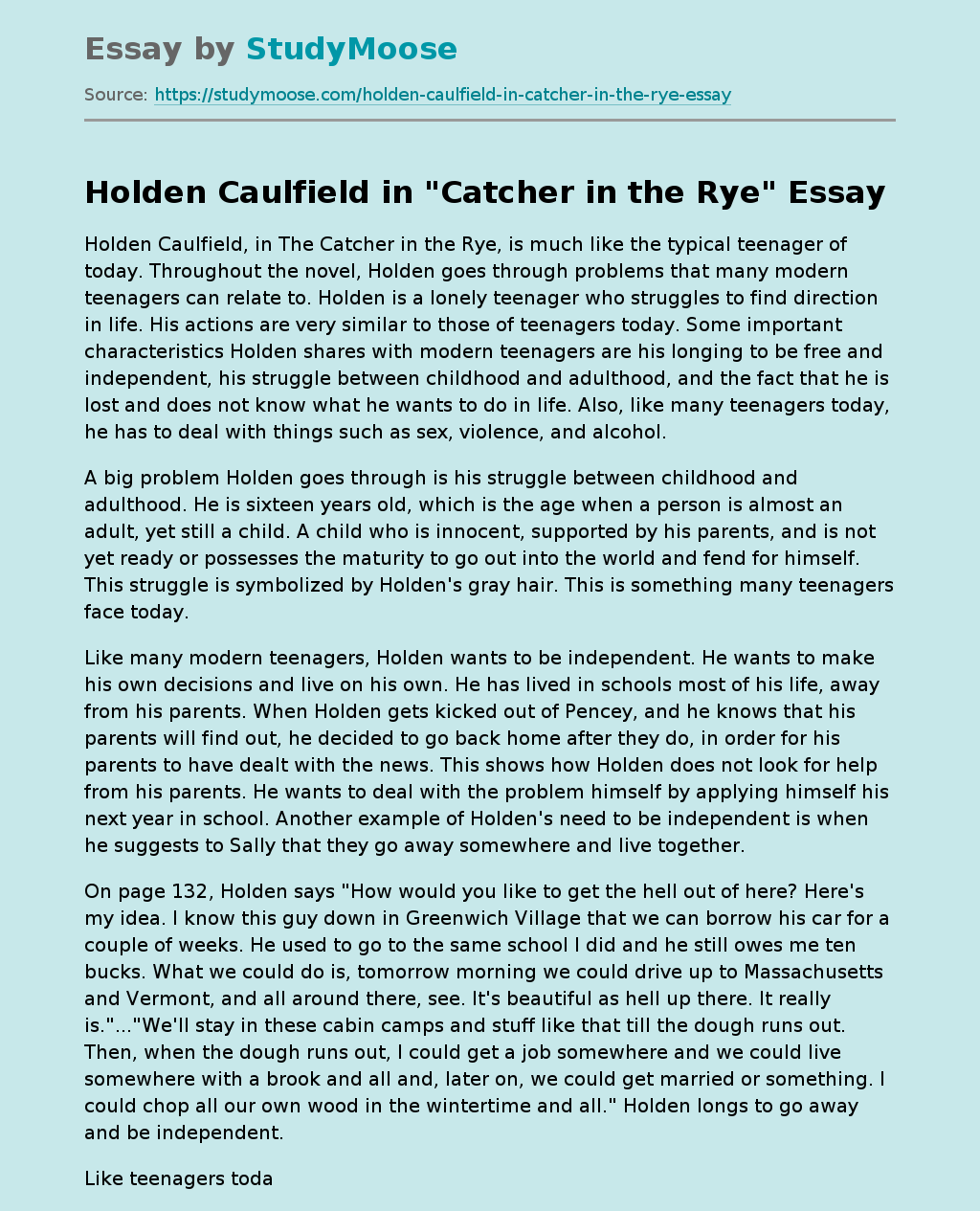