There are many similarities between Kurt Vonnegut’s short story “Harrison Bergeron” and Chandler Tuttle’s short film adaptation “2081”. Obviously the same basic idea and theme are prevalent throughout both the stories. They are both set in the future where everyone is made equal by being forced to wear handicaps where they might show strength. Both of the stories involve the same characters in the same settings under mostly the same circumstances. The short film adaptation may vary a little bit in some of the details but for the most part both of the stories are exactly the same.

Don't use plagiarized sources. Get your custom essay on
“ “Harrison Bergeron” Versus “2081” ”
Get custom paper
NEW! smart matching with writer

There are many differences between “Harrison Bergeron” and “2081” but they are mostly small details and do not change the story much. The first difference that I noticed when I watched “2081” was that instead of wearing bags filled with lead balls around their necks, the characters wore futuristic computer devices with a flashing display on them.

The next subtle detail that I noticed was when George, one of the main characters, heard a loud noise coming through his earpiece in the beginning, it was Hazel who had suggested that it had sounded like a milk bottle being stuck by a ball peen hammer instead of George. One of the bigger differences between the two stories is the conversation between George and Hazel in the beginning of the story.

In “Harrison Bergeron” when Hazel suggests to George that he rest his handicap weights on the pillows for a while, George responds by saying that he doesn’t mind them because he has worn them for so long that he’s become accustomed to them. He then proceeds to explain to Hazel that if he tried to get away with it then other people would try to get away with it as well, and that would lead to everyone being against each other again and eventually to the dark ages. Hazel resounds that she would hate it if that were the case.

However in the short film “2081” when Hazel suggests that George rest his weights for a while, George responds only implying that he himself would not be equal to Hazel to which she responds she would hate that. Also in the short story Harrison is arrested at age fourteen and escapes at age fourteen but in the short film the story takes place six years after Harrison was arrested. The final main difference between “Harrison Bergeron” and “2081” is the “bomb”. In the short film adaptation when Harrison escapes from jail and bursts into the ballet he claims that he has a bomb stored under the theater and the detonator in hand. When the H-G men cut off the broadcast to the incident, Harrison presses the detonator button, revealing to the audience that the bomb was in fact a device that sent out the television broadcast once again. In the short story there is never any mention of any such device.

There are many differences and many similarities between the short story “Harrison Bergeron” and the short film “2081”. However, throughout both stories the same theme remains prevalent throughout the entire stories conveying to the audience the same message, showing the beauty and necessity of diversity. 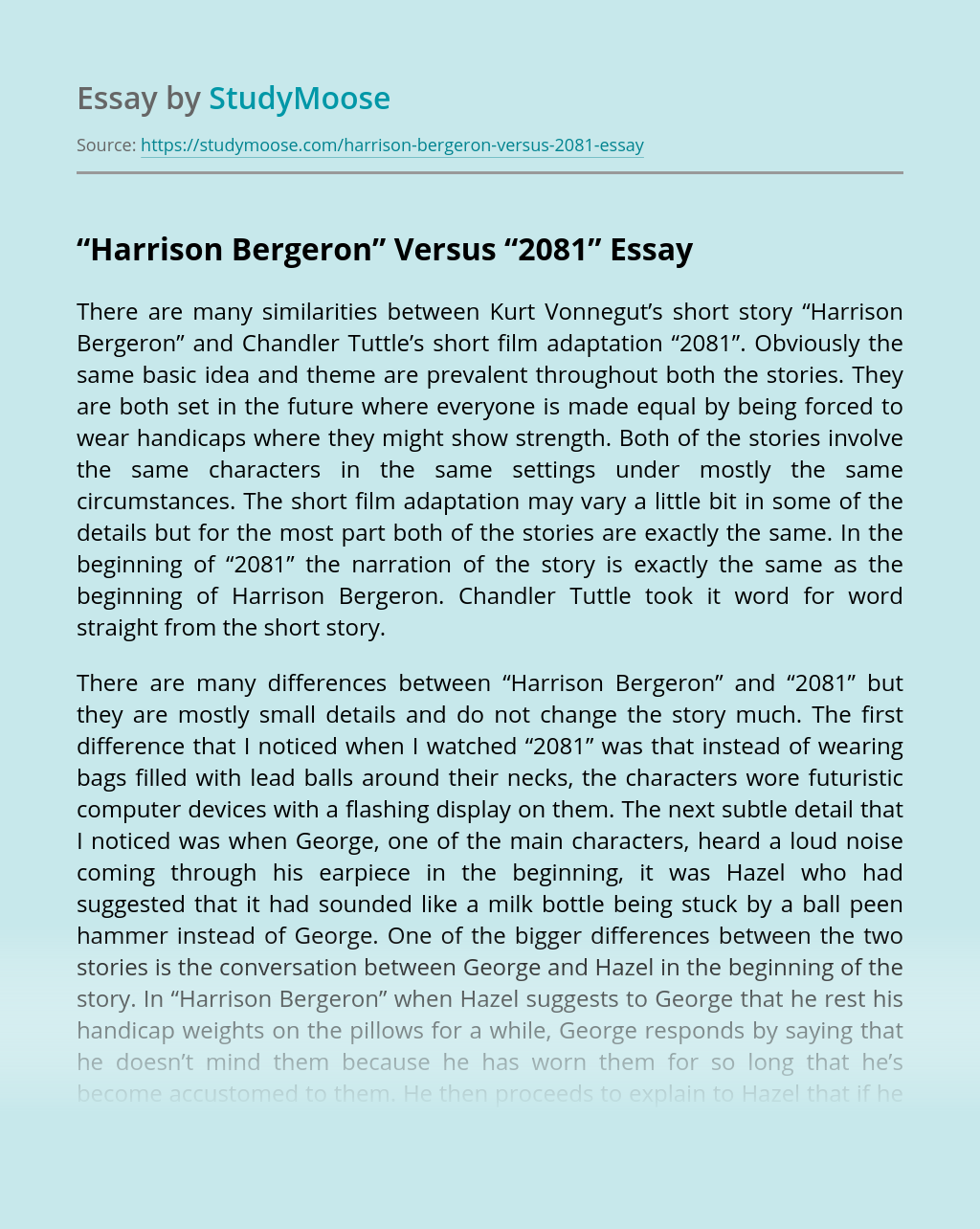