Hades in Media and Pop Culture in Modern Society

Hades can be found across multiple forms of media and pop culture in modern society. One popular form when the god is seen is in film. Some relatively recent and popular films where the god makes an appearance are Clash of the Titans (2010) and Percy Jackson and the Olympians: The Lightning Theif (2010). For me, my interest and love for Greek and Roman mythology started with the Percy Jackson books and movies. The series was the first ever series of book that I read while growing up and my favorite movies to watch.

Don't use plagiarized sources. Get your custom essay on
“ Hades in Media and Pop Culture in Modern Society ”
Get custom paper
NEW! smart matching with writer

That is why I have chosen to look at the Percy Jackson movie for this section. Hades plays a huge role in this movie as Percy Jackson much make the quest to find the lightning bolt in order to save his mother who was taken by Hades.

The first time that Hades makes an appearance in the movie is as a huge monster that comes from a fire. The whole camp of half-bloods is terrified.

Some run and hide while others are ready to fight. This can be easily explained by modern society because Hades is most often associated with or as the place that the dead go to. Most humans have a fear of death and in turn, fear Hades. However, in ancient times even with these possibly deadly associations, Hades was never feared as satanic or evil because death was believed to be a part of life. Unlike the ancient depictions of Hades, modern depictions show Hades as an evil and demonic figure.

There is no doubt that this is a way that Hollywood plays off of modern perspectives in order to as more drama and flair to their movies.

Unlike some movies, such as Disney’s Hercules who has Hades looking like a Satan-like creature, Percy Jackson also presents Hades as more of a complex human. In the movie, Hades is fairly hot-headed and had a punk-rock look to him. He has long messy hair, a beard, and wears black and leather clothes with jewelry. He plays his cards in order to get what he wants and does have an aspect of trickery to him. He is clearly meant to be someone the audience is either scared or intimidated by. In the end, however, he does let Percy Jackson and his friends go with the lightning bolt. Something that was seen in the myth of Hercules’ and his 12 trials when Hades allows him to take Cerberus and return him.

One thing that does match up with the orginoal myths in the movie, is that Hades is clearly in love with Persephone when the two are seen together when Percy is in the underworld.

The modern Hollywood interpertation of Hades is mosy likely one that the ancient Greeks would not agree with soley on the fact that his attribution are mainly focused around death and evil which is not what they believed.

Hades in Media and Pop Culture in Modern Society. (2019, Nov 25). Retrieved from http://studymoose.com/hades-can-be-found-across-multiple-forms-of-media-and-pop-culture-example-essay 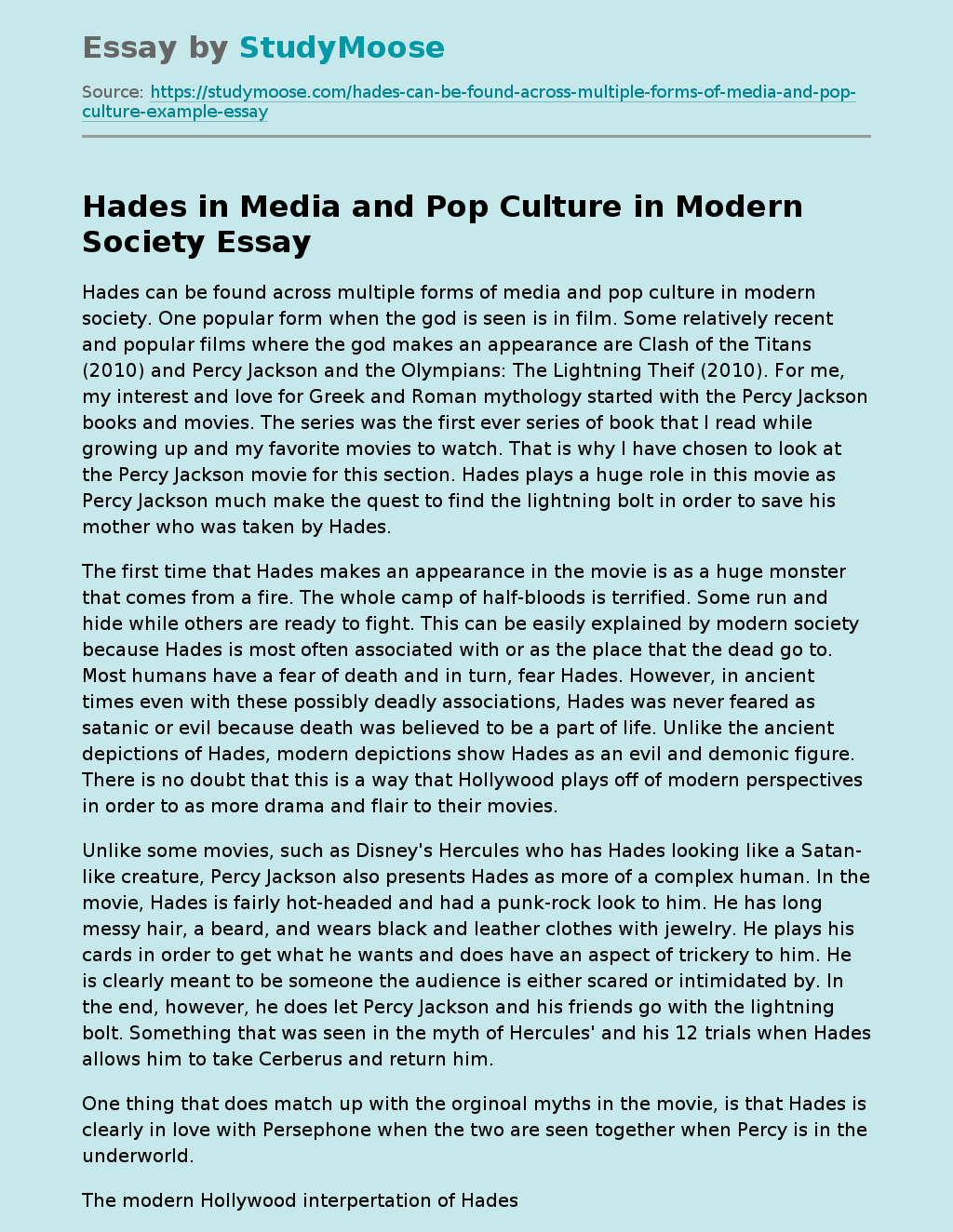