Gender in Their Eyes Were Watching God

Gender is the wide set of characteristics that distinguish between male and female entities, extending from one’s biological sex to, in humans, one’s social role or gender identity. Politics is a process by which groups of people make collective decisions. Sexual politics is the principles governing relationships between the sexes; also, such relationships seen in terms of power. Ideas and activities that are concerned with how power is shared between men and women, and how this affects their relationships

Don't use plagiarized sources. Get your custom essay on
“ Gender in Their Eyes Were Watching God ”
Get custom paper
NEW! smart matching with writer

) between respectability and desire, middle- and working-class discourses, and club and blues women. Their Eyes alludes to the politics of rape and lynching, by first charging Janie with sexual misconduct and then by acquitting her, primarily in the trial scene.

However, Their Eyes does not reject charges of African American women’s libidinousness (driven by lust) at the expense of sexual expression, as literary critics have argued of other texts from this period. J ANIE CRAWFORD, an attractive, confident, middle-aged black woman, returns to Eatonville, Florida, after a long absence. The black townspeople gossip about her and -speculate about where she has been and what has happened to her young husband, Tea Cake.

They take her confidence as aloofness, but Janie’s friend Pheoby Watson sticks up for her. Pheoby visits her to find out what has happened.

Their conversation frames the story that Janie relates. Janie explains that her grandmother raised her after her mother ran off. Nanny loves her granddaughter and is dedicated to her, but her life as a slave and experience with her own daughter, Janie’s mother, has warped her worldview. Her primary desire is to marry Janie as soon as possible to a husband who can provide security and social status for her. She finds a much older farmer named Logan Killicks and insists that Janie marry him. After moving in with Logan, Janie is miserable. Logan is pragmatic and unromantic and, in general, treats her like a pack mule.

One day, Joe Starks, a smooth-tongued and ambitious man, ambles down the road in front of the farm. He and Janie flirt in secret for a couple weeks before she runs off and marries him. Janie and Jody, as she calls him, travel to all-black Eatonville, where Jody hopes to have a “big voice. ” A consummate politician, Jody soon succeeds in becoming the mayor, postmaster, storekeeper, and the biggest landlord in town. But Janie seeks something more than a man with a big voice. She soon becomes disenchanted with the monotonous, stifling life that she shares with Jody.

She wishes that she could be a part of the rich social life in town, but Jody doesn’t allow her to interact with “common” people. Jody sees Janie as the fitting ornament to his wealth and power, and he tries to shape her into his vision of what a mayor’s wife should be. On the surface, Janie silently submits to Jody; inside, however, she remains passionate and full of dreams. After almost two decades of marriage, Janie finally asserts herself. When Jody insults her appearance, Janie rips him to shreds in front of the townspeople, telling them all how ugly and impotent he is.

In retaliation, he savagely beats her. Their marriage breaks down, and Jody becomes quite ill. After months without interacting, Janie visits him on his deathbed. Refusing to be silenced, she once again chastises him for the way that he treated her. As she berates him, he dies. After Jody’s funeral, Janie feels free for the first time in years. She rebuffs various suitors who come to court her because she loves her newfound independence. But when Tea Cake, a man twelve years her junior, enters her life, Janie immediately senses a spark of mutual attraction.

She begins dating Tea Cake despite critical gossip within the town. To everyone’s shock, Janie then marries Tea Cake nine months after Jody’s death, sells Jody’s store, and leaves town to go with Tea Cake to Jacksonville. During the first week of their marriage, Tea Cake and Janie encounter difficulties. He steals her money and leaves her alone one night, making her think that he married her only for her money. But he returns, explaining that he never meant to leave her and that his theft occurred in a moment of weakness. Afterward, they promise to share all their experiences and opinions with each other.

They move to the Everglades, where they work during the harvest season and socialize during the summer off-season. Tea Cake’s quick wit and friendliness make their shack the center of entertainment and social life. A terrible hurricane bursts into the Everglades two years after Janie and Tea Cake’s marriage. As they desperately flee the rising waters, a rabid dog bites Tea Cake. At the time, Tea Cake doesn’t realize the dog’s condition; three weeks later, however, he falls ill. During a rabies–induced bout of madness, Tea Cake becomes convinced that Janie is cheating on him.

He starts firing a pistol at her and Janie is forced to kill him to save her life. She is immediately put on trial for murder, but the all-white, all-male jury finds her not guilty. She returns to Eatonville where her former neighbors are ready to spin malicious gossip about her circumstances, assuming that Tea Cake has left her and taken her money. Janie wraps up her recounting to Pheoby, who is greatly impressed by Janie’s experiences. Back in her room that night, Janie feels at one with Tea Cake and at peace with herself.

Gender in Their Eyes Were Watching God. (2020, Jun 02). Retrieved from https://studymoose.com/gender-eyes-watching-god-new-essay 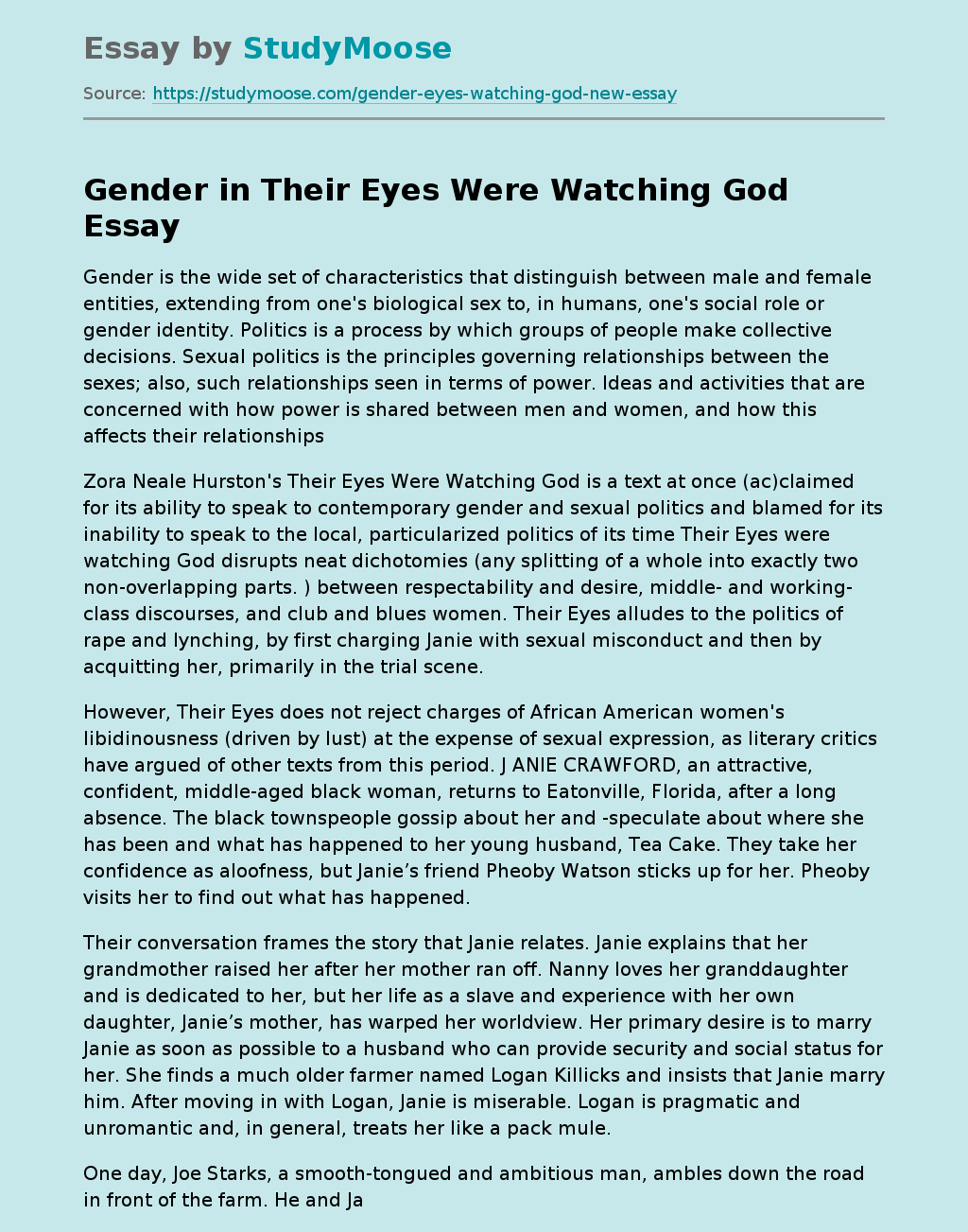