This is a strategic marketing plan for Gardenia Bakeries (KL) Sdn Bhd to sell their product “Auntie Rosie’s Natural Pandan Kaya” to the country “Australia” in the state of “Sydney”. 2.0 Overview of Gardenia Bakeries Sdn Bhd

In 1969, an American named Horatio Sye Slocumm was sent by International Executive Service Corporation (IESC) to East Malaysia to start a bakery. Gardenia was then born. Gardenia Bakeries (KL) Sdn Bhd rolled the first loaf of bread off its line in 1986.

Within four short years, it became the bread market leader with an astounding 99 percent brand recall rate and 80 percent top-of-mind recall. Gardenia’s range of products grew and evolved through the years, becoming better and better with each step. Leveraging on its brand strength, Gardenia now produces a variety of baked products to satisfy consumers’ demands. 2.2 Products of Gardenia Bakeries (KL) Sdn Bhd

There are 11 types of product that Gardenia Bakeries produce, 10 types of it are all breads and the specific one is the coconut jam called “Auntie Rosie’s Natural Pandan Kaya”.

This means that marketers will set prices depending on the results from the research. The price that Gardenia set for “Auntie Rosie’s Natural Pandan Kaya” is RM2.50, but there is also competitive rival that throw prices such is RM1.80 and
RM2.00. Gardenia would stay firm with this price due to its quality and well known brand over all these years. 2.4 Place/Distribution

Gardenia Bakeries (KL) Sdn Bhd doesn’t have its own outlets but it depend on grocery stall, hypermarket and mini markets to distribute its products. Gardenia Bakeries (KL) Sdn Bhd provides their product to places like big hypermarkets and mini markets along the street. As long there is stalls or outlet selling Gardenia bread products, there are sure “Auntie Rosie’s Natural Pandan Kaya” for sale. 2.5 Promotion

Gardenia Bakeries (KL) Sdn Bhd does not do any promotions.

3.0 Overview of Sydney, Australia
3.1 General Information about Sydney, Australia
Sydney is the state capital of New South Wales and the most populous city in Australia. It is on Australia’s south-east coast, on the Tasman Sea. In June 2010 the greater metropolitan area had an approximate population of 4.6 million people. Inhabitants of Sydney are called Sydneysiders, comprising a cosmopolitan and international population. 3.2 State of the economy

The economy of Australia is one of the largest capitalist economies in the world with a GDP of US$1.57 trillion. Australia’s total wealth is 6.4 trillion dollars. In 2011, it was the 13th largest national economy by nominal GDP and the 17th-largest measured by “PPP adjusted GDP”, about 1.7% of the world economy. Australia is the 19th-largest importer and 19th-largest exporter. Economy of Australia is quarterly forecasted by the Reserve Bank of Australia. Australian National University in Canberra also supplements Probabilistic interest rate setting project for the Australian Economy, which is compiled by Shadow board members from the ANU academic staff. 3.3 Reasons for selection

Australia is one of the richest countries to fulfill purchasing needs. I would target Sydney is because it is one of the largest city in Australia. In Sydney, there is a big population of people there and it includes a lot of overseas student from Malaysia too. The main reason I target Sydney
Australia is because the coconut jam would be easier to spread and sell for a head start because there is a lot of Malaysian and Singapore students studying there.

Australia is a political stable country. Legally is not a problem to sell “Auntie Rosie’s Natural Pandan Kaya” there.

Selling “Auntie Rosie’s Natural Pandan Kaya” is not a problem. However Gardenia Bakeries (KL) Sdn Bhd must expect competition in this industry Economic

Australia’s economy is doing very well. GDP growth is 3.4% and the per capital income is one of the highest in the world. The economy is generating opportunity for Gardenia Bakeries (KL) Sdn Bhd to sell “Auntie Rosie’s Natural Pandan Kaya” Social & Culture

New Entrants/ Potential Competitors:
It is predicted to have more competitions entering into the market 5
Consumer Bargaining Power

The price strategy would be using the Market Penetration Strategy which is to
sell it cheaper in the first three to five months and then raise the price to the normal price. I would suggest that the price that we should allocate in Australia is $2.0 Aussie Dollars for each coconut jam and after that it should be raised back to $2.5 Aussie Dollars. 7.3 Place/Distribution

We would be having a distributor as middle men to sell to all the hypermarkets, mini markets and even groceries store. We are targeting Sydney as our targeted location to start with first. 7.4 Promotion

I would want to sell it with a promotion just for the first month. By purchasing one “Gardenia’s Coconut Jam” we would free one more for the consumers. So it is a buy one free one promotion. This promotion will only valid for one month.

8.0 Conclusion
We look forward to help you implement the plan. 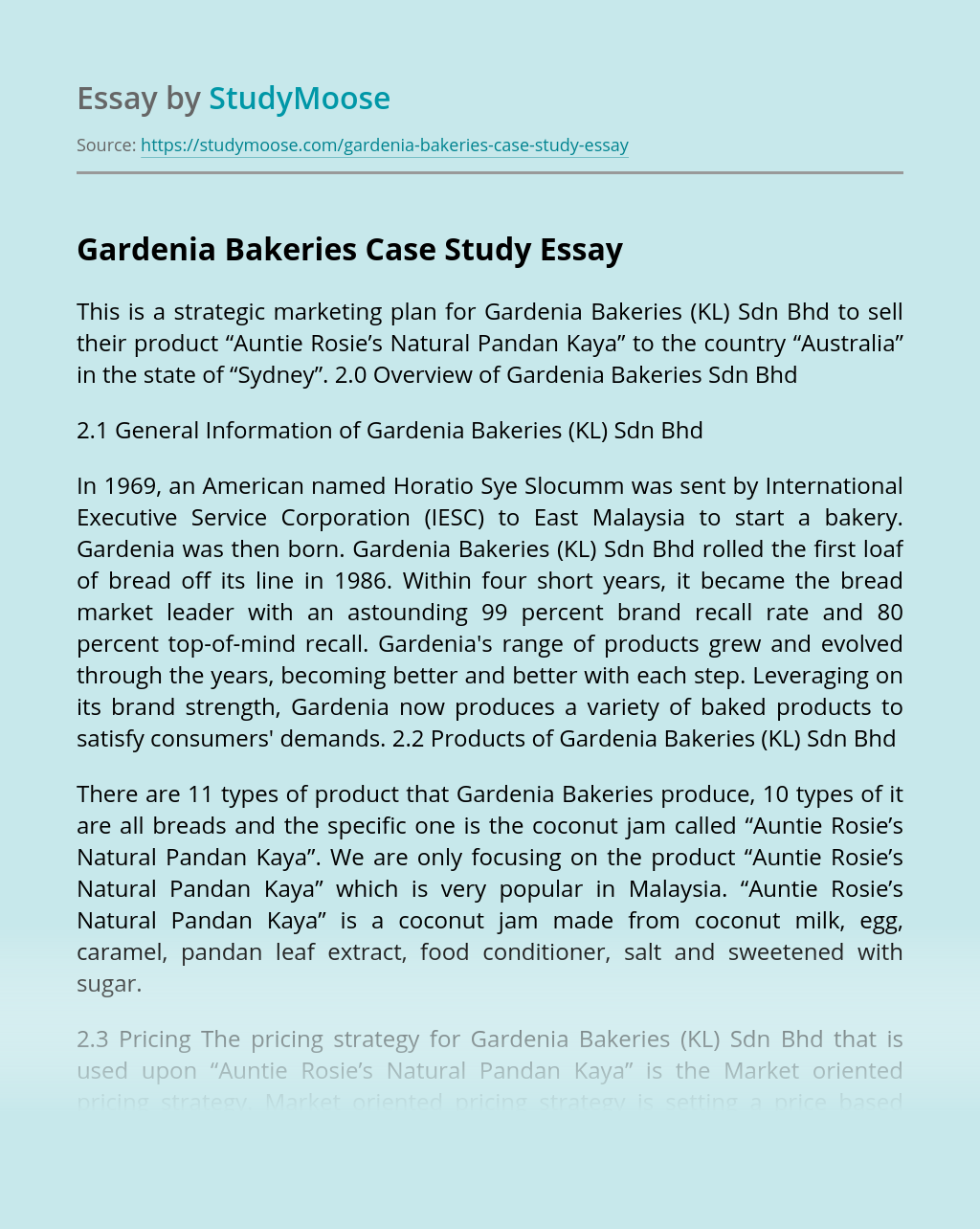