Facebook started out as a simple social networking site, and has now grown to be one of the biggest companies in the world. One would typically join the site to be social with others, but it seems like it is almost distancing people from one another. Facebook users tend to have hundreds of friends, but how many of those can actually be considered real friends? The meaning of friendship seems to be forgotten when it comes to Facebook. Facebook is affecting friendship in society today because people use it too much, have too many “friends”, and do not put as much effort in to their “real life” friends.

Turn in your highest-quality paper
Get a qualified writer to help you with
“ Friendship and Facebook ”
Get high-quality paper
NEW! AI matching with writers

The idea of Facebook seems like it would be a great way to maintain social relationships, but because people are using it so much it is actually isolating them more than anything. If Facebook was used in moderation, it would probably bring people a lot closer than it does now. Many of the millions of people that have a Facebook tend to check their page multiple times a day.

It has become a new addiction for people, and for some, a very serious addiction. Many people today can spend countless hours accessing the site, even when they are out in public! When out in a social situation, take a look around the room and notice how many people are glued to their phones.

It’s absolutely absurd. Before the use of smartphones and Facebook, people actually socialized with one another when they were together.

Now it seems like people are letting it take over their lives, and not looking around to see what’s going on right in front of them in the real world. Friends don’t spend as much time together because they are too busy tagging each other, or looking at the other’s comments or pictures. If people used Facebook less, it would have a more positive effect on friendship.

Most people in the world do not have hundreds or even thousands of friends, but on Facebook that is the norm. It has almost become like a popularity contest to see how many friends one can acquire. The more people one becomes friends with the harder it is to stay in touch with all of them. By having all of these “friends”, it seems like people aren’t focusing on what it means to really be a true friend. Junghyun Kim and Jong-Eun Roselyn Lee did a study on the effects of the number of Facebook friends one has: Having too many Facebook friends, on the other hand, will not necessarily increase social support one can receive, for most of the ‘friendships’ may be superficial at best.

It takes much time and effort to build and maintain mutual companionship with friends. Given the average number of close offline friends is only nine, it is not surprising that Facebook users maintain close connections with less than 3% of their Facebook friends. It is likely that the larger one’s Facebook network becomes, the less time and effort can be invested in each individual (Kim and Lee).

People shouldn’t refer to Facebook friends as “friends”, because most of the time those people aren’t true friends. A friend is someone who is always there, and is an important person in life that is trustworthy. It seems like people today are more focused on commenting on someone’s post, rather than actually taking the time to spend time with them. People need to take the time to realize who their true friends are, and try to make sure they stay close with them. Facebook actually has a maximum number of friends one can have at a time. Amy Dempsey stated “Holding on to old friendships via Facebook may prevent us from forming new connections in the real world” (Dempsey).

Amy later goes on to quote Oxford University professor Robin Dunbar, “According to Facebook, the reason for the 5,000-friend cap is that anything beyond that can make it too difficult to maintain an environment where you can stay engaged with your friends in a meaningful way”(Dunbar). It seems like the quality of friendship is diminishing in this society. People do not have the time to keep in touch with hundreds of people and actually have a close relationship with all of them. It shouldn’t matter how many friends one has, the quality of the friendship is much more important. Since people are using this site so much, their important relationships are suffering.

Facebook may seem like it is bringing friends closer together, but it is actually just doing the opposite of that. Facebook is becoming detrimental to friendships because people are using it too much, are acquiring too many friends, and therefore are letting it affect their meaningful friendships. Life is so short, and people should take the time to appreciate their true friends who are right in front of them, rather than to try to keep in touch with people that they may barely even know. If Facebook keeps on growing and continuing the way that it is, it does not look too good for meaningful friendships. It really is simple, spend more time with friends and less time on Facebook. 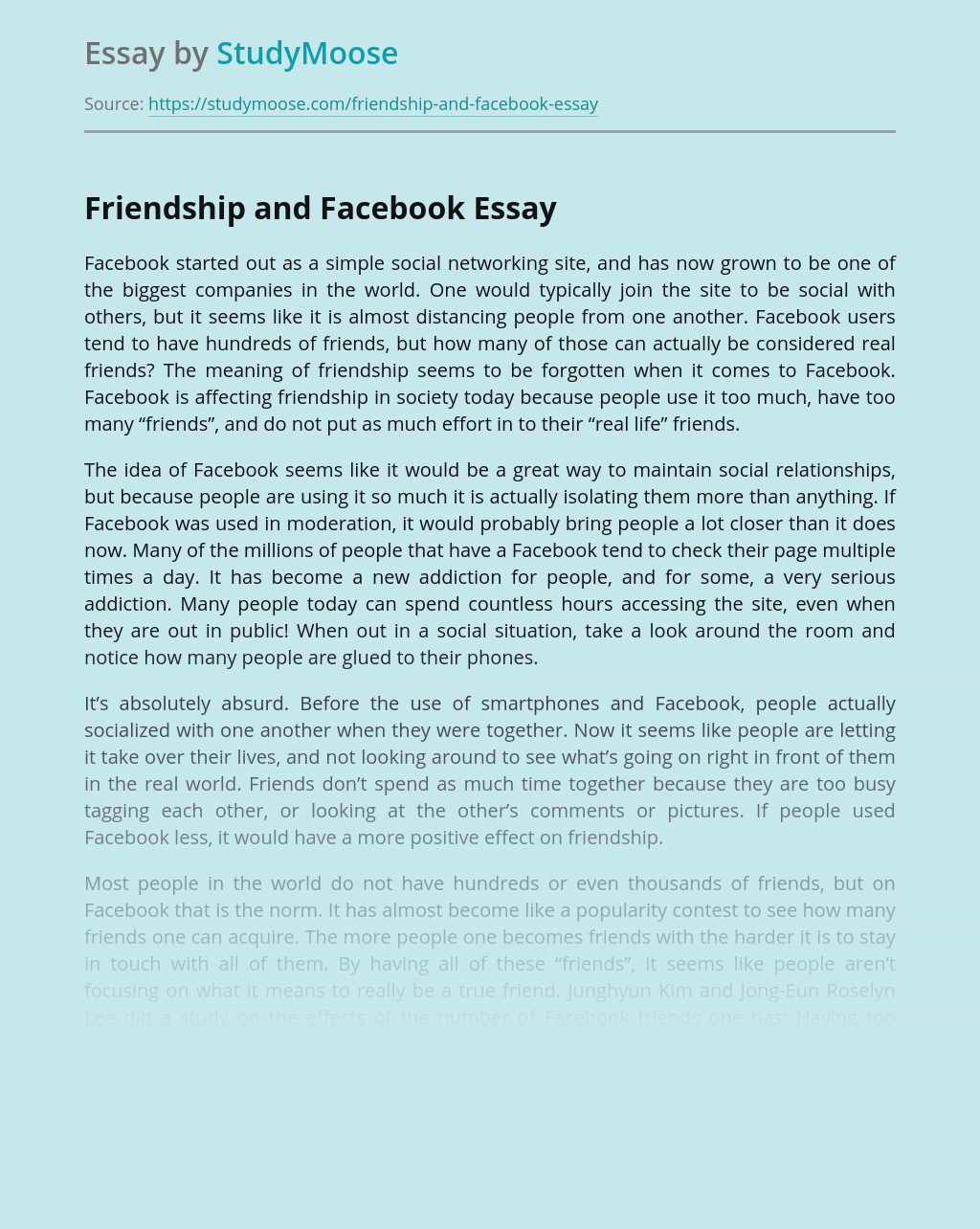 Turn in your highest-quality paper
Get a qualified writer to help you with
“ Friendship and Facebook ”
Get high-quality paper
Helping students since 2015
Stay Safe, Stay Original