Frederick Douglass And His Path Towards Learning To Read And Write

In the journal “Learning to Read and Write” Frederick Douglass explains the different challenges it was for a slave that wanted to learn in what way to read and write.

Don't use plagiarized sources. Get your custom essay on
“ Frederick Douglass And His Path Towards Learning To Read And Write ”
Get custom paper
NEW! smart matching with writer

He describes the environment in which he lived, and how it was like for a slave to learn how to read and write. His masters did not like for Douglass to get an education, because then he would become educated and he would not be of worth to them. In spite of all his challenges, Frederick Douglas was determined to read and write. In his journal, Douglas describes how illiteracy is one of the reasons for slavery, how knowledge is the tool to freedom, and how slaves feel about being property to their masters.

Slaveholders were against slaves learning to read and write because slaveholders wanted their slaves to remain uninformed. During this time, everybody assumed that slavery was a normal thing, and slaves didn’t learn how Europeans took enslaved people who were being captured in Africa and brought back to be slaves.

Slaves were thought only to work and be someone’s property; they were told that they were not skillful enough to be part of the civil society and should be workers for white people. Douglas made friends with white boys who he met in the streets, and he was envious of them because they were growing up to become free men. Douglas mentions to the boys, “You will be free as soon as you are twenty-one, but I am a slave for life!” (2).

Since birth Douglas was thought that he was going to be a slave for the rest of his life; he was too ignorant to know that his human rights had been taken away from him.

Slaves did not know, but learning to read and write was important to get their freedom. Douglas found out that education would help him to free. One day Douglas was on the wharf and met two Irishmen who asked him, “Are ye a slave for life?” (Douglass 3). Douglass was encouraged by the Irishmen to run away to the North, but Douglass was the spectacle of the men. Because he had heard stories of slaves running away and being captured by white people for a reward. He did not trust the Irishmen; besides, he wanted to learn how to read and write to write his own path.

Frederick Douglass describes how slaves are human beings and how slave owners treat them like property. The slave-owners did not want the slaves to be educated and told them what to do or what not to do. His masters would get mad at Douglass whenever they saw him with a newspaper. Douglass would not be allowed to be in a room alone, because his masters would suspect him of reading.

Frederick Douglass wanted to learn to read and write but did not have the opportunity because he was a slave. He eventually thought himself how to read and write. It was through his will and determination that he thought himself how to read and write. Through his journal, Douglass learned about the ignorance slaves encountered, the importance of knowledge, and the damages slavery had on individuals. In some way slavery still exists today; people of color do not face the same challenges, but still, deal with racism.

Frederick Douglass And His Path Towards Learning To Read And Write. (2020, Oct 14). Retrieved from https://studymoose.com/frederick-douglass-and-his-path-towards-learning-to-read-and-write-essay 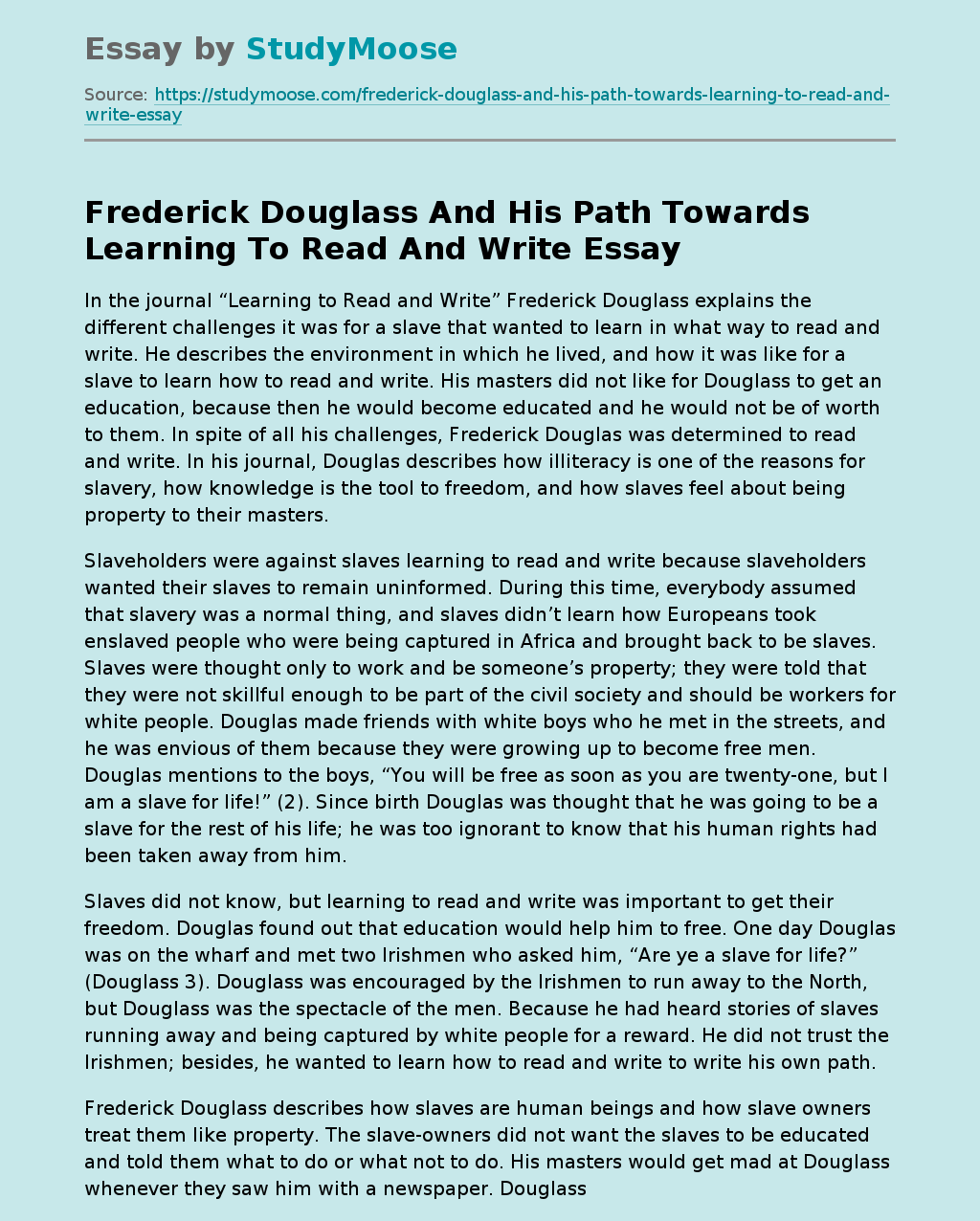