What is the typical order in which insects begin to arrive on human remains?

The typical order in which insects begin to arrive on human remains is blowflies, beetles, maggots, wasps, ants, and then spiders. 2. Describe the case that was one of the first recorded times of forensic entomology being used in a criminal case.

What role did forensic entomology play in the case?

The first case that forensic entomology was used involved a couple that was under investigation for the murder of a newborn baby.

Don't use plagiarized sources. Get your custom essay on
“ Florensic Entomology ”
Get custom paper
NEW! smart matching with writer

The baby was found in the couples fireplace mummified. This made it difficult to determine the time of death. So, Dr. Marcel Bergeret collected eggs and insects from the body and used them to determine that the baby had been murdered 2 years before then. Which meant that the previous owners killed the baby. What is forensic entomology? What are the different areas of forensic entomology?

Forensic entomology is the study of insects and eggs involved in criminal cases.

The different areas of Entomology include medicolegal, urban, and stored product. Who was Jean Pierre Megnin? What did he add to the study of forensic science? * Jean Pierre Megnin was a French army veterinarian and entomologist. Megnin was the first to catalog the different types of infesting human remains and insect succession. What are two methods used to help identify the species of insect from the eggs on human remains? Describe the methods.

*The two different methods to help identify the species of insects from the eggs on human remains are by using a small paint brush dipped in water and the other way is by using forceps.

What are some of the challenges in determining the time of death using insects? There are many challenges some of them would be if the body was buried or placed in a cool or cold environment which would slow down or completely stop decomposition. Another challenge would be if the body was burned or soaked in a flammable liquid, this would damage the body. Why is entomology an important area of forensic science? How can this area help criminal investigations?

Entomology is an important area in forensic science because it can prove when and where something happened, it could help them catch the killer. 8. What is the process of collecting insect samples? What challenges are there in collecting samples of insects from human remains?

The process for collecting insect samples starts with observing and recording any information that can be found. Then they collect the adult insects because they tend to leave once the body is disturbed. After that they collect all of the eggs which could easily be overlooked due to their size. The third thing they do is collect larvae, or maggot masses. 9. Why is the study of insects and their life cycles important for forensic entomologists? How is this information helpful to criminal investigations?

The reason the study of insects and their life cycles are important for forensic entomologist is because it could set a timeline on when the crime happened. This is helpful because it allows the police to catch the culprit and not charge the wrong person. 10. Describe the life cycle of the blowfly. Why is this information helpful to forensic scientists?

The life cycle of a blowfly starts as an egg, and then goes to be maggots, then the maggots goes to a pupa, and then the fly goes to the adult form. This could be helpful for forensic entomologist because it gives a round about time that the victim was killed. 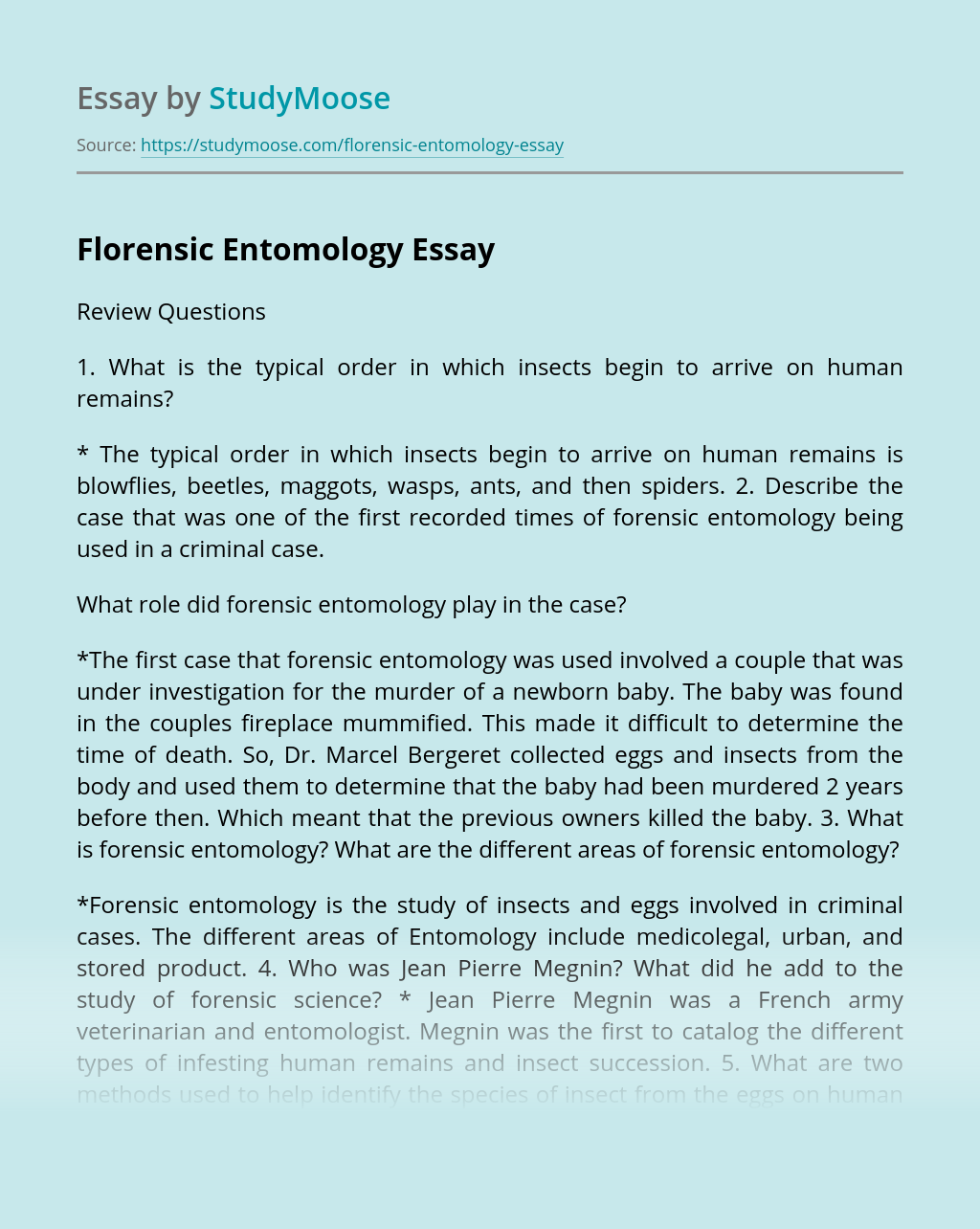