In this experiment milk was fermented into Kefir, then a series of tests were used to verify that fermentation in fact happened. The tests used to validate the fermentation were a gas production test, pH test, Gram stain, and turbidity test. The results showed throughout the conversion of milk to Kefir there was gas produced, a reduction in pH, more bacteria present, and an increase in absorbency. The outcomes showed that fermentation accompanied 3 positive confirmatory results from the gas production, pH, and turbidity tests, while the Gram stain test functioned as an unfavorable confirmatory test.

Don't use plagiarized sources.
Get Your Custom Essay on Fermentation Lab Report Just from $13,9/Page

The main goal of this experiment was to successfully ferment milk into a yogurt-like product called Kefir. The fermentation is achieved with a symbiotic combination of various bacteria and yeasts. The main type of germs found in the fermentation of milk to Kefir is Lactobacillus. Lactobacilli ferment the lactose discovered in milk and produces lactic acid, contributing to the sour taste, quality of Kefir. The fermented product, Kefir, is not know just for its taste, however more so for the numerous health advantages if can have for the body.

The initial step in this experiment was to make the fermented kefir product as well as a control. Two bottles were filled with milk; kefir grains were included to the first bottle to act as the experimental sample, and the 2nd bottle, which contained just milk, was used as the control sample. A rubber glove was placed on the top of each bottle to act as a gas collector, and both bottle were permitted to sit for twenty-four hours.

Discussion:
The gas production test showed the Kefir sample produced gas while the milk sample did not. This was interpreted as an indication of fermentation, because carbon dioxide is a direct product of fermentation.

The pH test showed that the kefir sample was more acidic than the milk sample, which is exactly what was expected. This confirms the presence of fermentation due to the bacteria producing several different acids when fermenting the carbohydrates in milk. The pH of the milk was neutral as expected.

The turbidity test showed the Kefir sample to have a higher absorbance than the milk sample. This went exactly how we expected, and is used as confirmation of fermentation since the fermented product would have more bacteria present.

The Gram stain test showed that there were bacteria present in both the Kefir and milk samples, which was not an expected result. Before conducting the experiment, milk was believed to contain no bacteria due to the pasteurization process. Upon further investigation the group came to the realization that bacteria was present in milk due to the ubiquitous nature of bacteria. This is the test that is considered the negative confirmatory test.

This experiment was funded by the selfless donations of Nick Fiore and Michael Ahrens, with additional funding from the University of Kansas. M.A., N.F., G.H., and M.C. designed and performed the experiment. M.A. wrote the report. No conflicts of interest were reported. 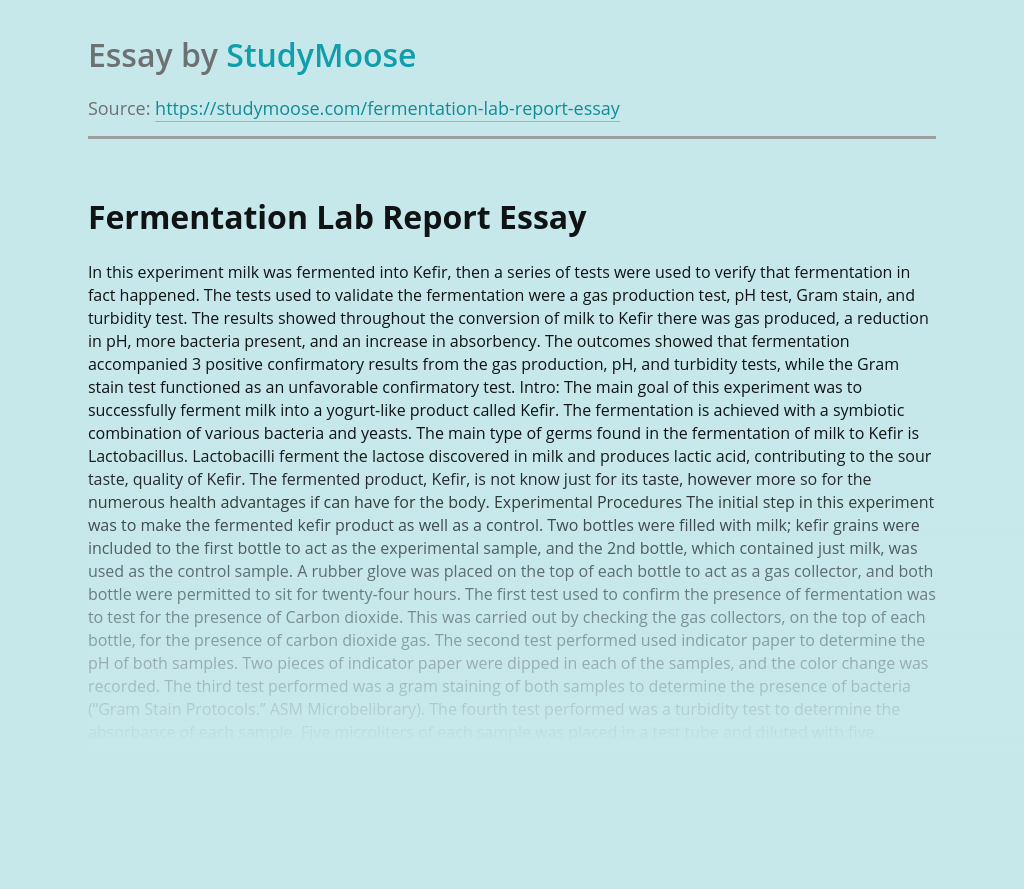 A lot of leisurely items to date have been somewhat remodeled or refashioned into something that is more cost-friendly for consumers. These are counterfeited items, more popularly known as “pirated” goods, which are illegal, as authorities would suggest. However, there are a growing number of consumers for pirated goods, especially in developing or underdeveloped countries;...

Both Wes Moore’s grew up without their daddies in their lives. Wes Moore’s father was eliminated from him at an early age due to disease. His father had severe epiglottitis. Till the death of Wes Moore he had a close relationship. While The Other Wes Moore’s dad choice to be missing from his child’s life....

Worker relations in hotels and catering is about the management of work and work relationships between supervisors and workers and, sometimes, customers. The staff member relations can be quickly divided in some “factors” i.e.: Unionisation Structure Culture Cumulative bargaining Settlement Consultation Dispute Management Empowerment Grievance & & disciplinary 1.1. Unionisation All staff members, in every...

Cheryl Albury in the book” Perspectives from Inner Windows,” reveals many of the social problems that we face in Bahamian society. In her stories “Waiting for Love” and “Pot of Gold” she uses them to reflect on some of the characteristics of Bahamian Men. From these two stories Albury portrays men as manipulative and selfish....

1.1 Dementia is a progressive disease where an individual’s brain functions deteriorate and affects their mental capabilities. This disease is incurable which is similar to another terminal illness such as cancer. Symptoms of dementia will affect an individual’s memory leading to loss and confusing, language/ communication, understanding and judgement. Medication can be prescribed to help...