In the past decade there has been a drastic down turn in the ethical and moral standards in the western world, especially in America. There is a vicious attack on the fundamental institution our family .It is sad to see how this downward trend is leading to an increasing decay of our family life. Basic ethics is a science that evaluates and explains the values that differentiate between right and wrong or good and bad conduct. The basic tool used to destroy the moral standards in our society is to tactfully change the basic concept of wrong or bad and alter it to look right and good.

Don't use plagiarized sources.
Get Your Custom Essay on Family values Just from $13,9/Page

Often these altered concepts are reached to the public is through media using high profile individual characters. The best way to convey the message about homosexual so called alternate family values would be to publicize the life of a gay bishop and reason with authenticity the very basic biblical concept of a traditional family and advocate that it is alright to redefine the family in an alternate way to fit the alternate life style of a minority group.

Another powerful way to implement such drastically different family values would be through ballot and legal system and force the lawmakers to make changes in the very laws that withstood these viscous attacks ever since our nation was born. Several lawmakers are yielding to the pressure tactics of a minority and making drastic changes in the basic constitution that upheld the traditional family values while the majority is watching with dismay. The most powerful tool of all is to brainwash the children in the very early ages with a school curriculum focused on alternate family life and skillfully deviate from the traditional family values.

The basic values that are taught in a traditional family are honesty, sincerity, integrity, generosity, trust, love, affection, caring, forgiveness, conservation and respect for others. Children are like sponges always ready to absorb. When they are fed with true family values they will develop a character and integrity to operate on these basic principles and make healthy choices in life. Growing children are like tiny plants easy to bend, trim and mould. We reap what we sow. Hence it is extremely important to teach the basic traditional family values at a very early age and instill the basic strong character that will build a personality with integrity to achieve success in life. These basic family values are passed down from generation to generation and the parents must groom their children with honesty and sincerity and make every effort to set an ideal example in the principles they firmly believe.

Building a strong character in a child’s life needs strong committed parents and strong dedicated teachers. Character building is a gradual process and the parents and teachers have a vital active role to play in helping the child to grow in the right direction. The basic ethical and moral principles you believe in should be constantly discussed, shared and taught in family and schools. Of course the greatest influence on a growing child would be the exemplary role model the parents establish in a family unit. It is easy to understand why some of the great men in history always had a parent in their early age to be a role model to shape their personality with an exemplary life style.

It is sad to see how the parents are neglecting the little ones with such disdain. It is really sad to see how the media is portraying the traditional family values as something of the past. It is sad to note that the Hollywood with all its glamour and power is actively promoting deviant behaviour. It is sad to see how the teachers are abandoning the family values and the role model they once were. The future looks really grim and perhaps beyond our imaginations. Very few people that realize the depth of this insanity and decay are branded as right wing extremists and humiliated. In the next decade with altered family values, the very basic traditional family may become a thing of the past and with it the very basic qualities taught in a family unit may disappear and be replaced by rampant cheating, lies, selfishness, revenge, hatredness, abuse, lack of respect and sexual immorality that might take us back to the animal kingdom with raw animal instincts and laws of the jungle.

America is a blessed, great and most powerful nation of noble people with highest moral standard because of their firm belief in strong traditional family values. If it falls which may likely happen like the other great empires in the history, it will be because of the decay of the family values. It is time we realize the value of a family unit and be there to support our children, teach them the family values and set an exemplary role model. The future of these great nation lies in the hands of these little ones who will one day be the parents themselves. 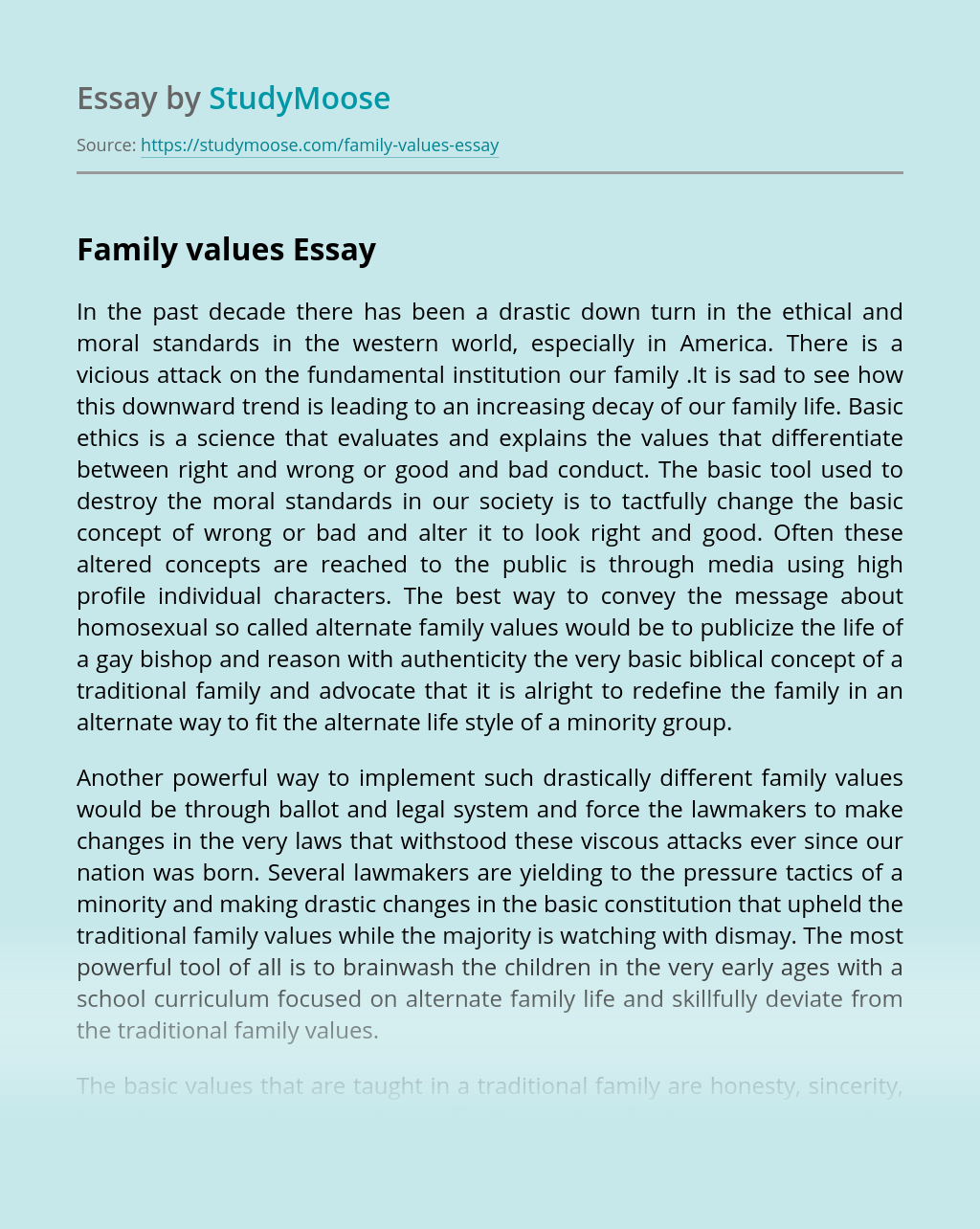 • More disposable income • Freedom to make independent financial choices with own money • Meet more people • Equal relationship • Have a life outside of home Disadvantages of working mother • Discrimination in the workplace when colleagues find you have a child • Risk being critisized for not being home to care for... VIEW ESSAY

View sample
A Good Man Is Hard to Find

One might think that Grandmothers are sweet and loving, and often innocent due to their advanced age and condition. We, as society, think of them as great examples of people that radiate love, mentors, and defenders of morality and good manners. However, this is not the case in A Good Man Is Hard to Find,... VIEW ESSAY

View sample
Get Essay
Basseri of Iran: Past and Present

Basseri of Iran: Past and Present Jonathan Hixon ANT101 Instructor Brown-Warren February 24, 2013 When the Achamenian emperors of ancient Persia built their capital at Persepolis, in a valley of the Zagros, they did so with strategy in mind. Persepolis was placed in a common “bottleneck” in the annual migration routes of several tribes from... VIEW ESSAY

When my family’s only television set went to the repair shop the other day, my parents, my sister, and I thought we would have a terrible week. How could we get through the long evenings in such a quiet house? What would it be like without all the shows to keep us company? We soon... VIEW ESSAY

View sample
Examine the functionalist view of the family